Cops Seize Four Who Tried To Drive Across Flooded Valley

The 4X4 was filmed as it slowly drove into the flooded Wadi Bani Ghafir river in northern Oman.
By Lee Bullen August 1, 2022
Facebook
Twitter
Linkedin
Email 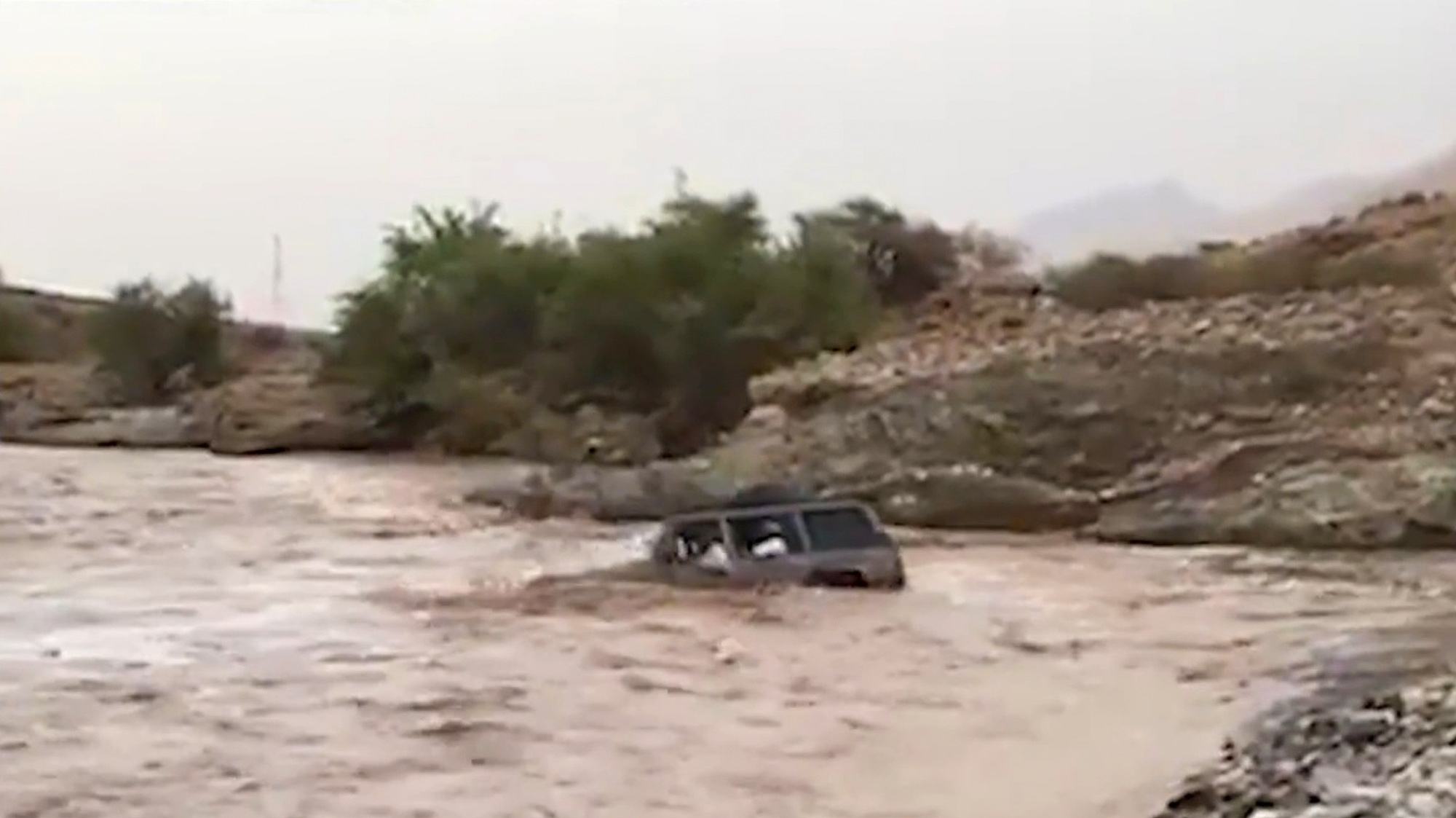 Omani people drive into a flooded valley in the Wadi Bani Ghafer area in the Wilayat of Rustaq town in Oman. They were later arrested by the Omani police. (@RoyalOmanPolice/Zenger)

These images show four thrill-seekers being swept away by fast-moving waters as they tried to cross a flooded valley in a 4X4.

The police in Oman arrested the driver and three passengers in the vehicle after they miraculously survived the nail-biting drama.

The 4X4 was filmed as it slowly drove into the flooded Wadi Bani Ghafir river in northern Oman.

But – the footage shows – the car was instantly overwhelmed by the floodwater and floated out of control on the rapid current before coming to rest against another shore. It can be seen slowly entering the water, at first, before the driver appears to accelerate.

The vehicle then enters the river at speed and can quickly be seen bobbing up and down as it floats off.

Police in the South Al Batinah Governorate reportedly arrested them for putting themselves at risk, accusing the four detainees of thrill-seeking.

It is currently unclear if the occupants of the vehicle, who have not been named, have been formally charged. But Omani media reports stated that legal procedures are being completed against the four suspects, adding that the matter has been referred to the judicial authorities.

The Royal Oman Police, who released the footage, said on Sunday, July 24: “The Police Command of South Al Batinah Governorate has arrested four citizens for deliberately crossing a valley in the Wadi Bani Ghafer area in the Wilayat (district) of Rustaq, exposing themselves to danger, and legal procedures are being completed against them to refer them to the judicial authorities.”

The police said that all four passengers had made it safely to dry land and no one had been injured. It is currently unclear if the vehicle, make and model unknown, was a write-off and if it was retrieved from the water.

Omani media reported that people who cross rivers in this way, if it is deemed to pose a risk to the life of themselves or the vehicle’s passengers, face a maximum prison term of three months and a fine of 500 Omani Rials (about $1,300).

Local officials also advised people to avoid driving in flooded areas and to remain in a safe place.

The Royal Oman Police said: “We urge you to take caution and not risk crossing wadies, only after ensuring that water levels have receded.”

According to reports, several regions in Oman have been battered by heavy rainfall this month.

Meteorologists have advised citizens to avoid valleys and mountainous regions as roadways may be affected by floodwater.