The skilled craftsman carves out delicate works of art by using his senses of touch and smell. 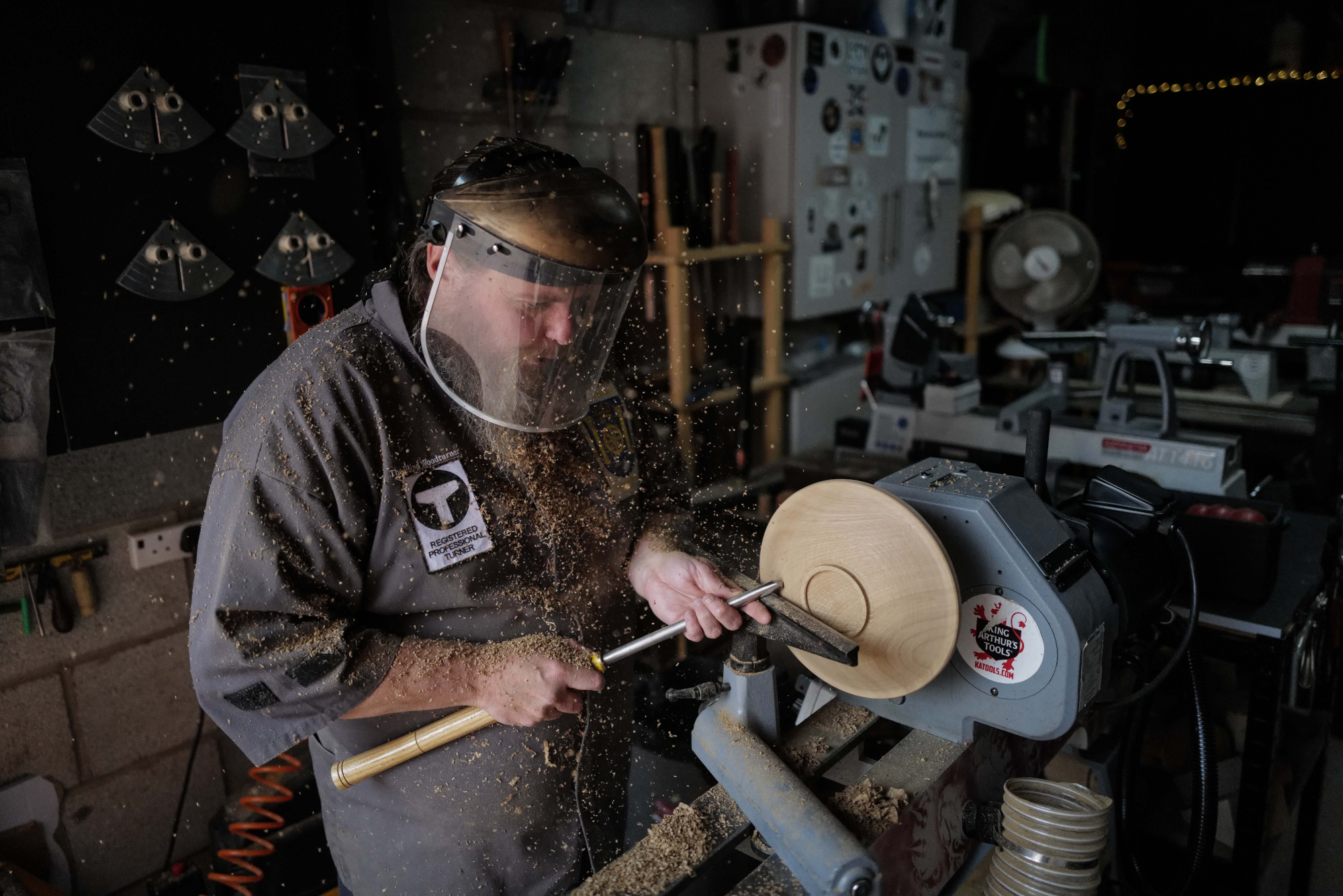 Chris Fisher, of Ashbourne, Derbyshire, Britain's first completely blind wood turner, July 27 2022. Fisher carves intricate items and works of art out of lumps of wood despite being blind - using his senses of touch and smell. (SWNS/Zenger)

A skilled craftsman is wowing customers by carving intricate items and works of art out of lumps of wood despite being blind – using his senses of touch and smell.

Chris Fisher, 52, is the United Kingdom’s only completely blind professional woodturner after taking up the hobby when he lost his sight 14 years ago.

The former engineer was aged just 39 when he started to go blind over a period of four weeks due to a parasitic infection called toxoplasmosis.

Fisher began honing his craft by listening to more than 600 hours of YouTube videos and capitalized upon his other heightened senses to begin creating wooden objects.

Using a lathe and other handheld tools, the horror film fan began by making himself a vampire stake and progressed onto more intricate and colorful pieces.

He became a professional and accredited woodturner in 2018 after mastering the ancient craft which can be traced back thousands of years to around 1,300 B.C.

Fisher now teaches the skill to children with disabilities and has become a Youtube sensation sharing his stunning creations with thousands of followers.

The married dad-of-one says the images form in his mind as he feels his way around despite working with dangerous machinery and razor-sharp blades.

His fingertips are also so sensitive that he can detect the minute difference after wood has been sprayed with fine paint purely by touch.

He also relies on auditory clues to reassure him that the piece of going according to plan and can identify different types of wood solely by their smell.

Fisher, of Hulland Ward, Derbyshire in central England, in the United Kingdom, said he first decided to try his hand at woodturning because he wanted to make a vampire stake as a Halloween prop.

He said: “It all started, strangely enough, because I wanted a stake as I’m a big horror film buff.

“But I didn’t just want to get a piece of wood out of the garden and just whittle a stick or a twig, I wanted something more stylized.

“After getting the lathe and starting it was probably about a month of trials, tribulations and errors and mistakes until I had a vampire stake that I was happy enough to display as a prop.

“That was just the start and it evolved into all the other things that woodturners are synonymous with – goblets, platters, bowls, handmade pens, candlesticks.

“I start shaping pictures in my mind and then I will stop and have a feel. It’s obviously quite stop-start but I learned to persist. Everything is considered action.

“I’m also listening all the time for auditory cues. There’s good and bad sounds and I’m listening to make sure a piece is balanced, safe and running smoothly.

“I can tell by the interaction between the tool and the wood if there is a flaw in the wood or a crack.

“My sense of smell helps me with wood recognition. I can tell whether something is sycamore or oak using my nose.

“Some woods have a hot butter popcorn-like smell while African woods tend to be more medicinal.

“I still have a sense of what the world looks like in my mind’s eye as I could see for nearly 39 years so I still rely on that.

“To work with dangerous machinery you have to make sure everything is perfectly in the right place and never deviate away from that.

“But it’s quite spontaneous, instinctive and free-flowing and hopefully I eventually end up with something that feels pretty cool.

“My goal is to inspire others by demonstrating that anything is possible and to show the world that having a disability isn’t the end, it’s just a new beginning.”

Fisher’s method is based on using his alternative senses which he said became more sensitive not long after becoming blind.

He added: “Your brain really does need the information and input to function.

“It was very quick, certainly within weeks all my other senses started getting more acute.

“Those senses that you never really have to rely on because you use your eyes so much soon evolve to become finely tuned.

“I can even tell what my wife is thinking based on her breathing rate and if she is wearing eye shadow by the smell.

“It then takes tenacity, practice and self-belief to try and excel in a certain discipline then and I’m still learning now.”

Woodturning is the art of using a rotary wheel and hand-held tools to carve and shape wood.

Fisher has been professional for four years this August after being encouraged by other pro turners to apply and hopes his success can lead to others giving it a go.

He said: “Hopefully that’s opened the gates for other visually impaired woodturners that might want to go for their professional accreditation.

“I’ve done it, so there’s certainly nothing stopping them. At the minute I’m the one and only but hopefully there will be more in the future.”

Fisher had to undergo a year of rehabilitation to relearn basic life skills after coming to terms with the impact of losing his sight in 2008.

He had to overcome adversity to overcome side effects included anxiety, hallucinations insomnia and muscle spasms.

Fisher said: “I had four years of crippling anxiety so I was chomping at the bit to get my teeth into something creative.

“At the time there was that much going on and that much to process, being told you’re going to be blind for the rest of your life and you need rehabilitation, learning how to make a cup of tea and have a shave safely, there was a lot going on.

“About a year after going blind, I did a cookery course for the blind, but then had panic attacks, hallucinations, and suicidal thoughts.

“It was a delayed reaction to going blind because it happened so quickly.

“It’s turned out to be a great form of therapy, it’s a coping mechanism and even though my workshop is a dangerous place, it’s a safe space for me.

“I find it a sensory, cathartic experience.”

Fisher uses both traditional and modern carbide tools and owns four lathes and became the first blind woodturner to be accepted on to the Register of Professional Turners.

He now travels around the United Kingdom giving public woodturning demonstrations, speaking about his experiences, and sharing his story.

Toxoplasmosis is a disease caused by a parasite that is frequently found in cats. It is often spread by exposure to infected cat feces or consumption of improperly cooked foods containing the parasite. Pregnant women exposed to the disease can pass it to unborn children.