The archaeological find was briefly visible at low spring tides and is now covered once more as the shifting sands move again.
By Simona Kitanovska July 29, 2022
Facebook
Twitter
Linkedin
Email 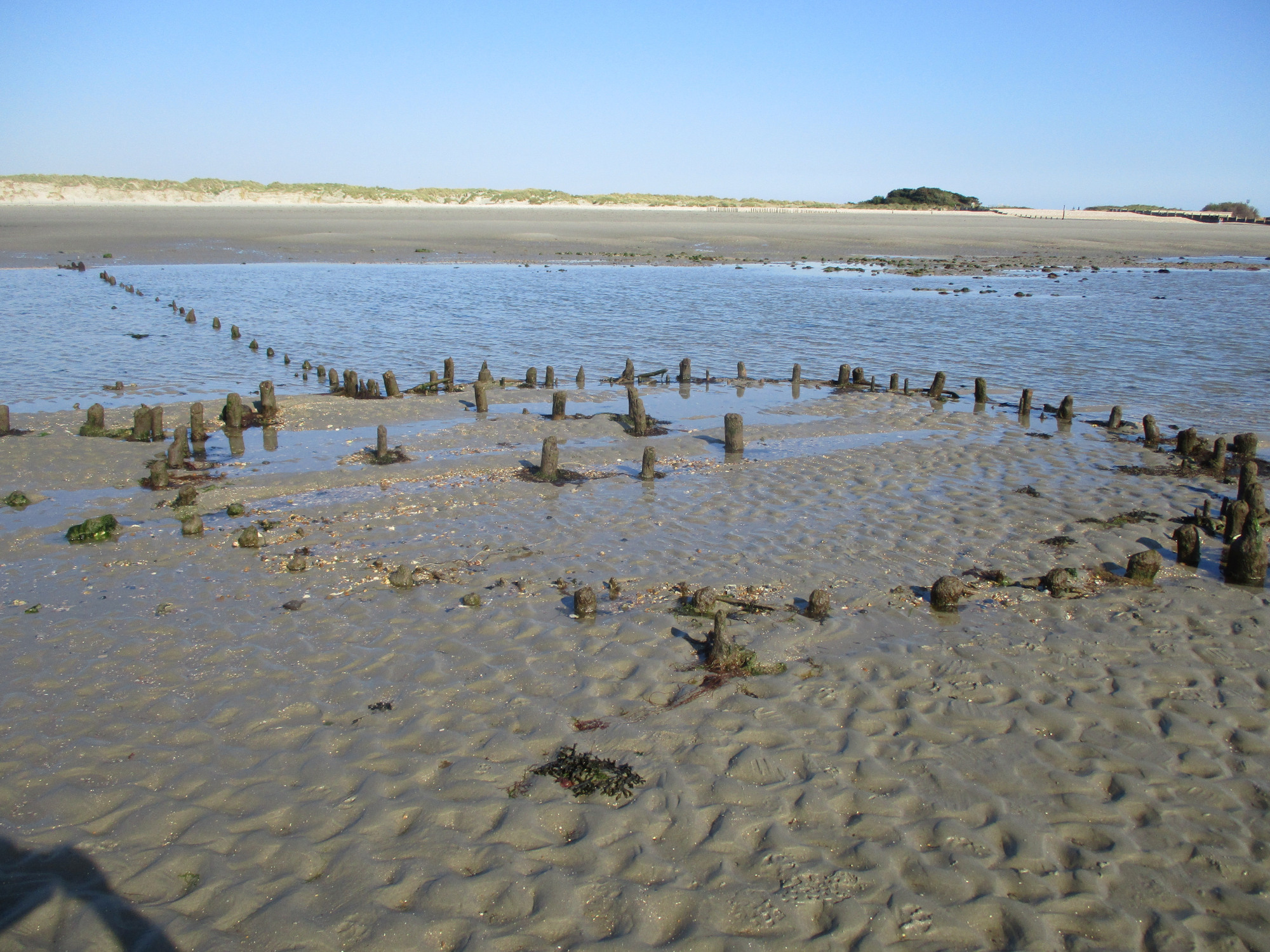 This rare 500-year-old Tudor structure used to catch fish has emerged from beneath the sand at a popular beach - and is only visible due to the low tide in Chichester, West Sussex, in the United Kingdom. Undated photograph. (Peter King CDAS, SWNS/Zenger)

A rare 500-year-old Tudor structure used to catch fish has emerged from beneath the sand at a popular beach – and is only visible due to the low tide.

Shifting sands revealed the incredible wooden traps built for catching fish in Chichester, West Sussex, in the southernmost part of England, in the United Kingdom.

Dating from the 16th Century and known as ‘pound and leader traps,’ the devices were discovered under the waves at East Head beach.

Radiocarbon dating gave a date of around 1561 for the East Head fish traps. The design is unique to the Solent area of the U.K. and northern France and was used over a period of about 800 years. The Solent is a strait that separates the British mainland from the Isle of Wight in southern England.

Coastal changes led to the fish traps being abandoned, but also led to their protection as if they had not been buried in the sand and stayed waterlogged the wood would have disintegrated many years ago, experts said.

The discovery is a window into how people lived and survived on the Sussex coast during the Middle Ages and beyond, archaeologists said.

The newly discovered wooden structures are the remains of two fish traps, made of circular pounds between 16 and 23 feet in diameter with timber that would funnel fish into the pounds as the tide dropped.

Most early to post-medieval fish traps, recorded on our coastlines and within the intertidal rivers, are ‘simple’ V-shaped structures, scientists said.

The mysterious structures were first reported by a member of the public in 2014 but follow-up investigations found only sand and they remained hidden for another six years until another passer-by reported they had reappeared.

A number of recording visits were then carried out at low spring tides last year, before they disappeared beneath the sand again.

The two fish traps are offshore and are usually inaccessible and often invisible, as they are on intertidal sand flats, split by broad shallow channels.

Archaeologists from Chichester and District Archaeology Society (CDAS) and CITiZAN, supported by the National Trust, have been recording structures in the tidal zone at this popular Sussex beach.

James Brown, a National Trust archaeologist, said: “In order to understand how these mysterious structures worked, you need to roll back the landscape and time around you.

“As you stand at East Head, strip away the cars, roads and recreational beach use, in your imagination.

“Earlier inhabitants would have collected fish from the pounds into baskets, transporting them to shore at low tide and then on to the community for selling and eating.

“As these successful and large fish traps were used regularly, they needed to be accessible all year round and within a predictable tidal range.

“So it follows that the landscape around the traps, when they were first constructed and used, was different from what is found today.

“As the structures themselves won’t themselves have moved, the landscape around them must have changed.”

Coastal change in Chichester Harbor was reviewed by the Museum of London Archaeology Service in 2004.

They used a technique called map regression – examining all known historic maps – to show the composition of the sand that has moved eastward since 1786 by more than 546 yards.

Peter Murphy, of CDAS, said: “The geographical and age distribution of this type of trap is surprising. It shows that coastal communities, living similar lives, were closely connected, so ideas spread.

“But why do we not see traps of intermediate date between the Saxon period and the 16th century?

“Perhaps we have not yet found them, though suggestions that there was ‘archaeological’ transmission of knowledge is worth bearing in mind.

“Could 16th-century fishers have seen the remains of earlier fish traps and replicated them?

“As so often in archaeology new discoveries lead to new questions, leading to new research. We are extremely grateful to the Council for British Archaeology, South East (CBASE) for funding the radiocarbon dating at this site.”

It was noted that Chichester Harbor was rejected by the Navy Board in 1698 because it was too dangerous to enter, as the entrance to the harbor was less than a quarter of a mile wide.

This showed how much the sand shifted and that its location has changed since the fish traps were built.

The map regression revealed that it has rolled over the archaeological structures at least once, and it may have done so before.

It is most likely that the traps were originally positioned in a north-south-flowing intertidal creek, experts said.

Brown added: “The fish traps at East Head are not grand archaeology, attached to a stately home or palace.

“But the site is a window into how people were surviving in coastal environments on a daily basis and clues to how the landscape might have looked 600 years ago. It is a rare glimpse, as the sediment shifted.

“A moment to learn something and record everyday ways of life that we rarely see in documentary sources.

“This moment is fleeting and the shoreline is highly mobile, so clues like this are being revealed daily before being hidden again or lost completely.

“Not just as the result of storms, but just from the daily lapping of waves along our shoreline. Volunteers and local residents regularly walking our coastline are hugely valuable to citizen science.

“We ask them to please keep sharing their knowledge and reporting what they find, to help us to continue to reveal the past and build our understanding of our rich and varied coastline.”