The “Office’s” B.J. Novak writes and directs a mystery that veers into political misunderstandings. 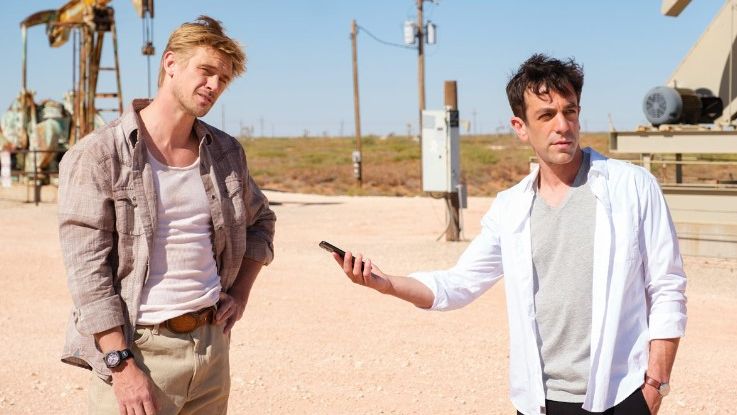 Too often the film fails because Hollywood cannot hide its contempt for those living outside of Los Angeles and New York.

B.J. Novak, well known for his work on NBC’s “The Office,” makes his directorial debut in a film that tries to understand “America,” or more specifically, Texas. But Novak’s film “Vengeance” does little to promote greater communication or understanding between diverse cultures and sensibilities.

The Story: “Vengeance” is a film about a New Yorker writer named Ben Manalowitz (B. J. Novak) who lives his life like many wealthy young New York progressives.  Ben goes to rooftop parties with his buddy, and they talk about the numerous women they’ve slept with — convincing themselves their empty lives have meaning.

One day, Ben receives a phone call from a brother of a girl he briefly dated. A young woman named Abilene was found dead at a West Texas party and her cause of death was labeled an overdose. Ben flies to Texas to pay his respects. Ty (Boyd Holbrook) firmly believes Abilene (Lio Tipton) was murdered, claiming his sister would never do drugs.  Ty wants Ben to investigate the cause of her death.

Instead, Ben wants to take the opportunity to do an exposé on Middle America, the people he thinks can’t face reality. Refusing to acknowledge that Ty may be right, Ben strings the family along, as he documents their actions for his upcoming podcast. But after spending time in Texas, Ben discovers there’s more to Abilene’s family than he understood.

Bright spots: B. J. Novak shows his potential as a film writer and director. Novak, no stranger to writing and directing TV shows, understands how to create a mystery. Novak’s screenplay is a detective film within a documentary, mixed with some unintentional comedy.

Novak appreciates he has to humanize the Texans to his audience. He does this by presenting himself as an out-of-touch elitist with a thick degree of smugness toward rural America. In contrast, the film shows there is more to this Southern family than guns, God and Whataburger.

Early on, the film presents itself as a black comedy. There’s a lot of humorous dialogue revolving around the main character’s inability to cope with the seriousness of the situation. The most intriguing character is Ashton Kutcher, who plays a wise and inspiring music producer.

No matter what side of the political aisle you are on, there is at least half a good movie to be found here. The problem comes when Novak abandons everything that he sets up in the first half of the film, with a disappointing third act.

Weak Spot: Story-wise, this film has absolutely nothing to do with politics and everything to do with a murder mystery. As much as “Vengeance” attempts to be self-aware, it may send a mixed message.

Some progressives have nothing but disdain for those living in states that voted for Donald Trump. The premise of the film is that Republicans are simply wrong and that they exist in a world of delusion. The film’s attempt to bring everyone together involves our protagonist coming to the realization that these Texans may  not be as clueless as he thought. That provides him — and his audience — a chance to reevaluate their assumptions.

However, Novak’s dislike for Americans who don’t believe in climate change, Covid vaccines and fact-checkers is evident. By abandoning the premise of his own movie, “Vengeance” turns into a film about a man who seeks revenge for a woman he didn’t care about until the last 20 minutes of screen time.

Some critics will look at Novak’s attempt to humanize “MAGA Country” as a negative. But to torpedo your own template with a puzzling ending, turns our 110-minute mystery into a pointless endeavor.

The Takeaway: When it comes to “Vengeance,” subtlety would have gone a long way to improving the story line. If he had abandoned the Blue State versus Red State narrative, Novak would have produced a solid story about a big-town writer solving a small-town mystery. Instead, he creates a film that says little, since it cannot sympathize with an audience it doesn’t understand.

See or Skip: Since “Vengeance” can’t commit to its own premise, there’s no reason for viewers to commit to seeing it.