Romario Punch was busking near the Vistula River in central Warsaw, when he was approached by the Coldplay singer.
By Simona Kitanovska July 29, 2022
Facebook
Twitter
Linkedin
Email 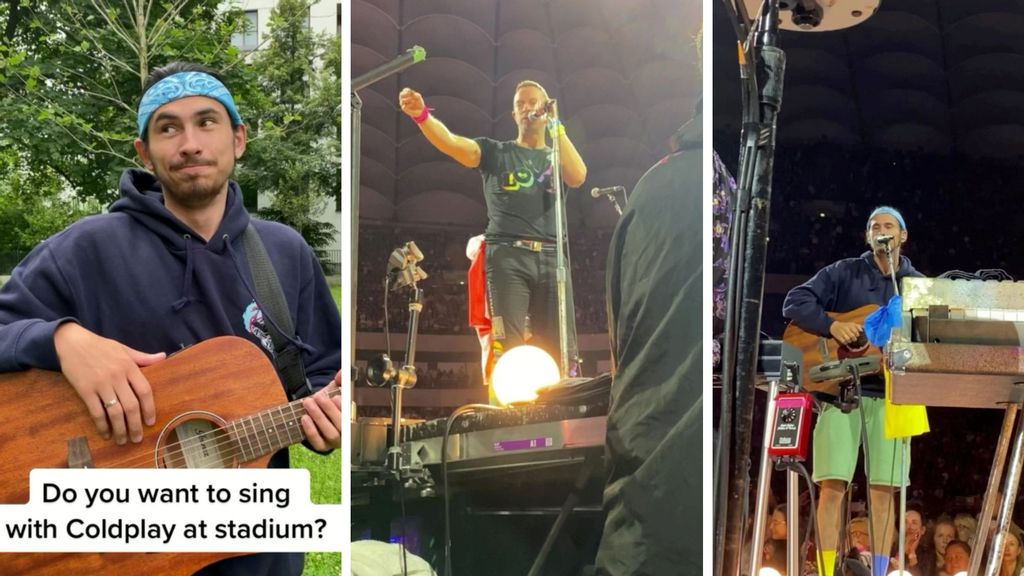 Romario Punch, 26, from Ukraine performs at sold-out Coldplay gig in Poland on July 8, after being approached by frontman Chris Martin while busking on the streets of Warsaw the previous day. (Olexandra Amelchenko, SWNS/Zenger)

A Ukrainian man performed at a sold-out Coldplay gig in Poland after being approached by frontman Chris Martin while busking on the streets of Warsaw.

Romario Punch, 26, was busking near the Vistula River in central Warsaw, when he was approached by the Coldplay singer.

Punch sported a Ukrainian flag when Chris Martin approached him and invited him to perform at their show at the PGE Narodowy stadium the following day.

He revealed that the star introduced himself, complimented Punch’s voice and asked if he’d like to join them at their sold-out show.

Punch traveled to the stadium with his wife, 26-year-old fashion designer Olexandra Amelchenko, the following day.

The pair were met outside the arena by the group’s tour manager, who gave them VIP passes, and took them to their very own dressing room.

Punch ended up performing four songs before Coldplay and was called on stage at the end of the show to sing one last song with the Grammy-winning band.

The pair performed a Ukrainian song called ‘Obijmy’ (translated as ‘hug me’) as a Ukrainian flag hung from Punch’s microphone.

Punch described the once-in-a-lifetime experience as ‘awesome’ and thanked the Coldplay team for making him feel so welcome.

He said: “I didn’t have to pay a thing for the travel or even for the tickets.

“I sang four songs by myself on the main stage before Coldplay played, which was incredible.

“Then Chris Martin brought me onstage at the end to sing one last song with him and the rest of Coldplay. In total, I was on stage for about 20-25 mins.

“I’m a professional but that was unlike anything I’d ever done before.

“It was also incredible to see the huge organization that goes into making one show. It was just amazing.”

Punch fled his hometown of Chernihiv, Ukraine, at the start of this year and has settled in the Polish capital with his wife Olexandra.

The professional performer has been singing since the age of four and is hoping to begin a music course at a university in Warsaw.

Punch hopes that he can inspire people to keep aiming high and expecting the unexpected.

He said: “I want people to look at me and understand that everything is possible.

“I don’t even think that you need to want it – I had no idea Coldplay were even in my city!

“You have to just be yourself and do what you like.”

Chris Martin approached Punch on July 7 and he played the gig the following day.