Dolan said: “It was the best football match I’ve been to so far.” 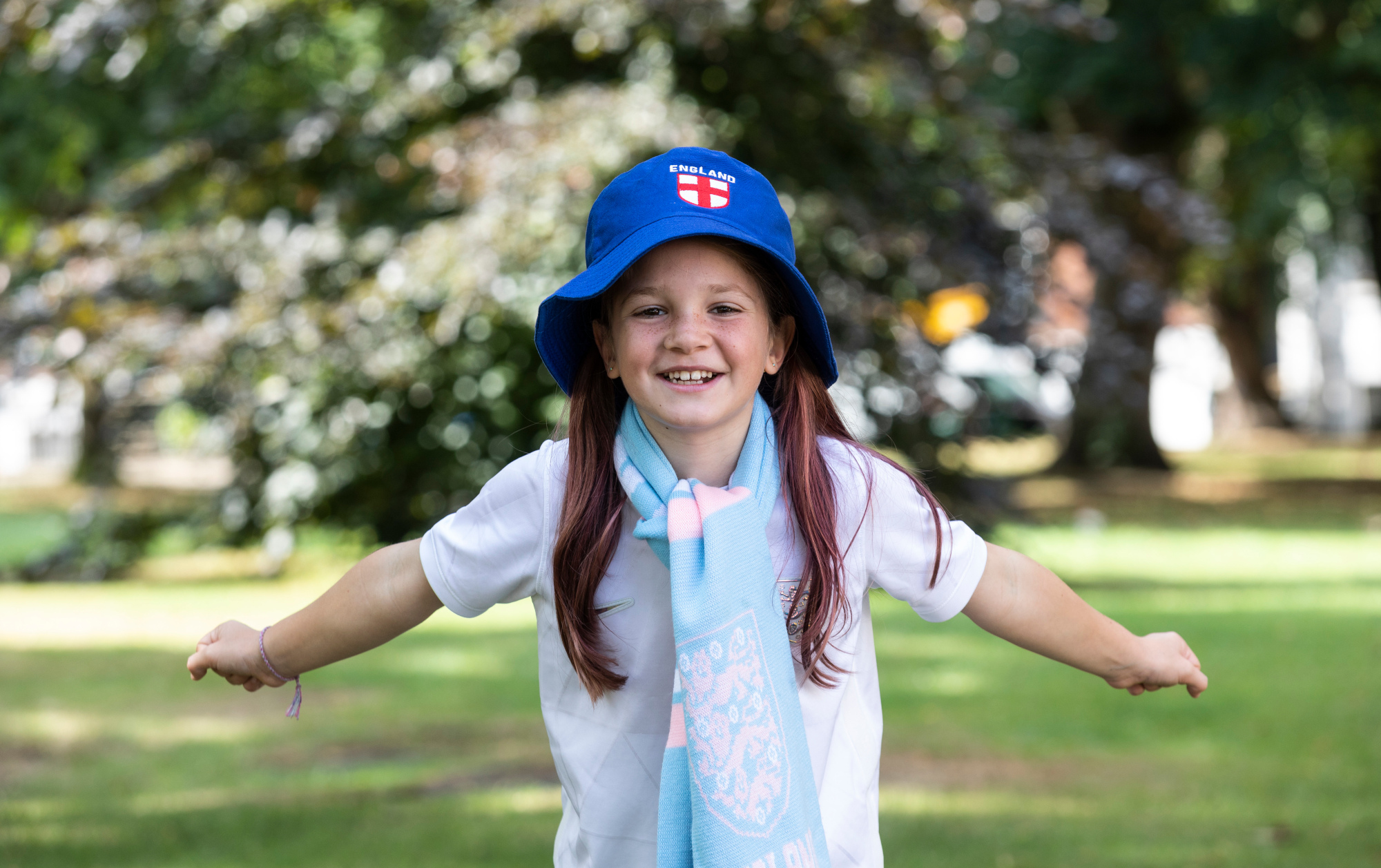 Tess Dolan wins the hearts of millions of TV viewers by singing and dancing to the victory anthem Sweet Caroline after England smashed Sweden 4-0 at Bramhall Lane, on July 26, 2022. (Lee Mclean SWNS/Zenger)

A young English soccer fan who captured the hearts of the nation with her joyful celebration is hoping to roar the Lionesses on to success in women’s soccer finals at Wembley stadium.

Tess Dolan, eight, warmed the hearts of millions of TV viewers when cameras caught her singing and dancing to the victory anthem Sweet Caroline after England smashed Sweden 4-0 at Bramhall Lane.

Now the footy-mad youngster hopes to be in Wembley, which is located in London, the U.K.’s capital, on Sunday when Sarina Wiegman’s side take on the winners of France vs Germany.

And while she insists she ‘can’t predict the future’, Tess said: “I have a lot of faith in them to win. I feel like they have a big chance of beating either of them.

“We haven’t got tickets but I would love to go.”

Tess, of Knaresborough, in England’s Yorkshire region, was among the 28,000 frenzied fans inside Bramhall Lane stadium in Sheffield to cheer England to victory on Tuesday night, July 26.

But despite a dominant performance on the pitch – including a cheeky 68th-minute back-heel by her favorite player Alessia Russo – Tess was the real star of the show.

Within minutes, her mom Sam Dolan’s phone was ‘going mental’ from pals who had seen the clip on TV and across social media, where it quickly went viral.

Such was the popularity of the clip, she appeared on breakfast TV Wednesday morning, July 27, where she was interviewed by England and Arsenal legend Ian Wright.

Dolan said: “It was the best football match I’ve been to so far.

“It was amazing. I didn’t know I was on TV until my mom got lots of text messages from people. I was just dancing and enjoying myself.

“I was singing Sweet Caroline and then my mom started getting messages.

“It’s really weird to be on the TV, but it feels amazing.”

Manchester United fan Tess said England super-sub Russo is her favorite player and seeing her score England’s third was a highlight of the special night.

But the schoolgirl will soon be playing in the colors of arch-rivals Leeds United after being selected for their emerging talent center.

She said: “I’m very excited but the thought of wearing a Leeds tracksuit is weird. But it is a big opportunity.

“I hope to play for Manchester United and England when I’m older.”

Mom Sam, a head of marketing, said: “It was just crazy, we stayed for a long time after the game because the atmosphere was so good.

“I just kept getting video clips and messages sent to me.

“I could not be prouder of her, she is my absolute sunshine, she will cheer anybody up on a bad day.

“You never have to encourage her to put effort in or give her best, she just always does. She puts her heart and soul into everything as you can see with the dancing.”

Sam said Tess, who has an older brother Harry, 16, was excited to get tickets for the match and was pictured enjoying the atmosphere before kick-off.

“We had tickets for the first game at Old Trafford and we went to watch the warm-up game at Elland Road.

“We got tickets for last night and Tess and spent all day in a state of excitement.

“The atmosphere before the game was amazing.

“We were a bit nervous for the first 25 minutes but after that it was brilliant.

“Tess being a big Manchester United fan, the fact Russo scored was the icing on the cake for her.”

Social media users have clamored for the FA to provide tickets or even make Tess a mascot for the Sunday at Wembley.

One social media wrote of the viral clip: “This is what all sport should primarily be about, inspiring the future and ENJOYMENT!”

Another tweeted: “Come on England, little Tess has to be mascot for Sunday’s final.”

The Football Assocation of England, from which ‘soccer’ derives its name, is the governing body of the sport known in English-speaking countries outside North America as ‘football.’