Refugees living on board will be able to transit to and from the dock via shuttle buses, available 24 hours a day. 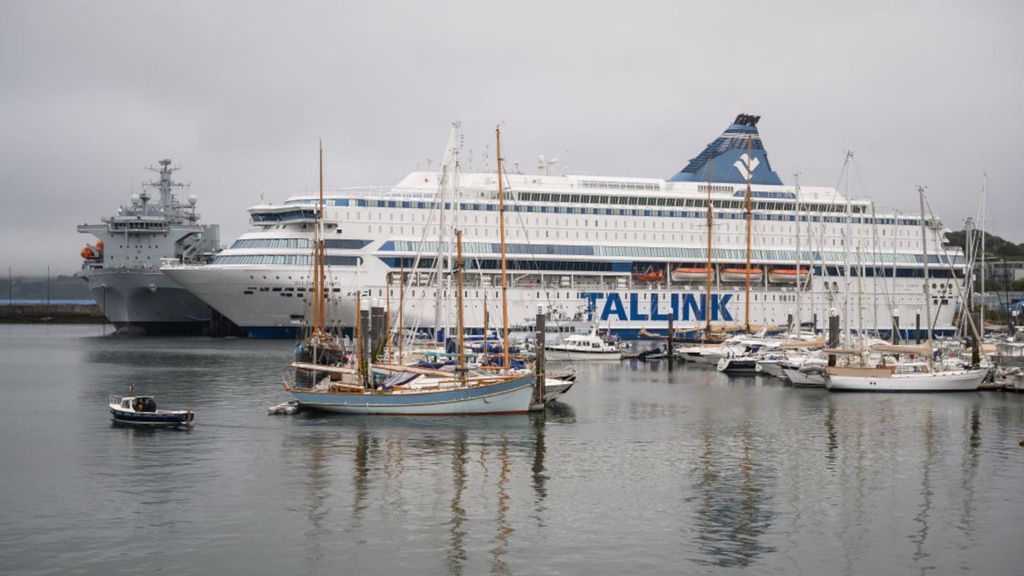 The Tallink cruise liner Silja Europa seen in the bay on June 09, 202 in Falmouth, England.(Photo by Leon Neal/Getty Images)

A cruise ship chartered by the Scottish government to accommodate Ukrainian refugees took its first residents on Tuesday, July 27- amid claims it had not undergone full safety checks.

The MS Victoria, which has been chartered until January 2023, will provide people with accommodation until they secure somewhere to stay long-term.

He also pointed to issues surrounding its sister ship, the Isabella, which has been used as temporary accommodation for those fleeing the conflict, saying it was the subject of “serious concern”.

The Scottish government said 1,600 to 1,700 refugees would initially stay on the ship and that it would also look to increase capacity further. During its time as a cruise liner, the boat accommodated up to 2,200 passengers.

Refugees living on board will be able to transit to and from the dock via shuttle buses, available 24 hours a day.

There will be services on board for guests, including restaurants providing free food, child play facilities with toys and books, shops, laundry, cleaning, wifi access and communal spaces.

The government announced its plans to charter the ship in a bid to find accommodation for a backlog of refugees who had arrived through its super sponsor scheme, which allowed people to list the government as their host through the Homes for Ukraine visa, rather than finding a named sponsor.

The super sponsor scheme was suspended on July 11, with the government saying the number of new applicants had “increased significantly” in recent weeks and it needed time to be able to match new arrivals to long-term accommodation.

Briggs said: “The first Ukrainian refugees seem to be arriving on the SNP’s rented cruise ship without its suitability or safety ever being properly assessed or inspected.

“Nor has any thought gone into the implications for the pressure on local services in Leith.

“We know that conditions on its sister ship, being used in a similar set-up in Estonia, have been the subject of serious concern.

“Yet the SNP was so eager to talk up its extravagant promises, it failed to do the serious planning required.

“We can only hope that these people, fleeing a brutal conflict, will get the support they deserve, since it was never going to come from the Nationalists’ disastrous, and now abandoned, super sponsor scheme or their other ill-thought-out boasts.”

Scottish Labor External Affairs spokesperson Sarah Boyack said: “This marks the start of a shameful chapter for Scotland. People fleeing war were promised a safe place to stay in Scotland, but instead they have been stuck on a cruise ship.

“The SNP need to urgently start doing the work they should have done months ago and make sure that every Ukrainian coming here has suitable accommodation and access to the services they need.”

Concerns had previously been raised around the use of the ship over school places for youngsters living aboard, as well as the possibility of outbreaks of illness such as COVID-19.

Scottish Liberal Democrat leader Alex Cole-Hamilton said: “We should remember that these are people fleeing conflict and ensure that they are treated as guests.

“Many Scots have offered a place in their homes but not even been contacted yet.

“If temporary accommodation is needed while the suitability of more permanent places are assessed then why not look into using student housing now that terms are finishing?

“That would be more dignified than using cramped cruise ships.”

Scottish government housing secretary Shona Robison said: “The safety and welfare of displaced people from Ukraine, who are primarily women and children who may have experienced much stress and trauma, is of paramount importance to the Scottish Government.

“The success of the scheme can be seen in the fact that around 115 people arrived on average each day in the week to July 19.

“With 9,000 displaced people with a Scottish sponsor already here, accommodating them all is always going to be a challenge.”

She said that all of the ship’s crew had child and adult protection training.

Robison said: “We do not want people spending more time in temporary accommodation, such as the ship, for any longer than is absolutely necessary.

“But we want to make them as comfortable as possible during their stay and we have worked with partners to provide a variety of services on-board for guests in addition to the support services available.

“The Scottish government is still undertaking work to increase the capacity of the temporary accommodation and maximize the number of displaced people placed with volunteer hosts who have completed the necessary safeguarding checks.

“I am proud of the support that Scotland is providing the people from Ukraine and I want to thank everyone who has been involved, from those helping to prepare the ship for use, those providing support services and to the people opening up their homes to provide Ukrainians with a warm Scottish welcome.”

The government said there would be a 24-hour reception available onboard with Ukrainian-speaking staff to assist guests and a perimeter set up with “proportionate” security and identification checks for people moving on and off the ship.

In the week to July 19, there were 9,037 total arrivals with a Scottish sponsor, of which 6,163 have come under the super sponsor scheme.