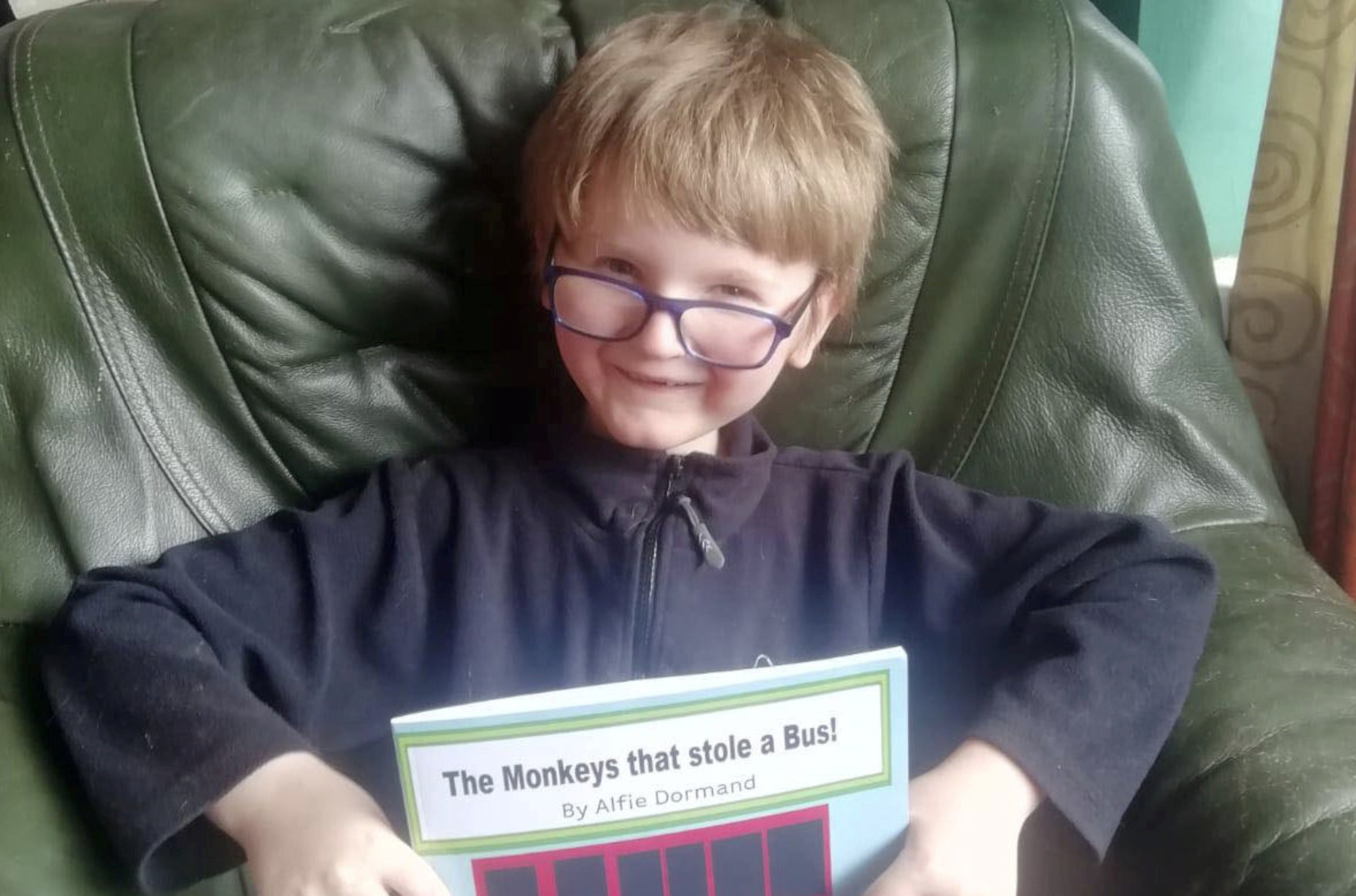 Alfie Dormand, 8 has written and illustrated a storybook himself - to help raise the money to buy a new wheelchair. Undated photograph. (Michelle Dormand, SWNS/Zenger)

An eight-year-old boy suffering a rare genetic disorder has written and illustrated a storybook – to help raise the money needed to buy a new wheelchair for himself.

Alfie Dormand, 8, began writing his book ‘The Monkey That Stole A Bus’ during lockdown after being inspired by a day out at Paignton Zoo at the seaside resort town of Paignton in southern England, in the United Kingdom.

He even illustrated the book himself using a computer program to create colorful drawings to accompany his imaginative tale.

Through sales of his storybook on Amazon and donations via his Just Giving page, Alfie has raised over 1,000 British pounds (equivalent to $1,198) toward the costs of the new electric wheelchair costing more than 3,000 pounds ($3,500)– which would give him greater independence than his current manual wheelchair.

He has a rare genetic disorder called L1 Syndrome and a related condition known as Hydrocephalus, both of which affect his mobility.

Mom Michelle Dortmund said:“We hired an electric wheelchair three years ago when we went to Paignton Zoo and he loved it.

”He fell in love with the flamingos and when he saw how cheeky the monkeys were it just gave him some ideas for stories.

“He whizzed himself around the zoo on his own and did it really well, the grin on his face because he was doing it himself was really nice to see.

“It was nice for me to see him being a little boy and going off with his brothers instead of being behind him pushing.”

Teachers have been reading the book to fellow students at Alfie’s school, St. Mewan Primary in the town of St. Austell in England’s Cornwall region.

Parents have been purchasing the book to support the budding author’s fundraising efforts – with Alfie even signing books like a professional.

Winner of the World’s Strongest Man competition, Eddie Hall, also features in the book – and the strongman bought a copy and sent Alfie a video to say thanks.

The schoolboy had previously ventured into the world of writing when he wrote ‘The Crocodile’s Day Trip’ at the age of just six.

“He likes to make little stories – he does all of the drawings on the computer himself as he finds using a pen difficult so uses Microsoft Paint on the computer instead,” said Alfie’s mom.

“It would make so much difference to have an electric wheelchair – at the moment he can power his manual one a bit but he’s not very good at steering because he has trouble with his arms and hands.

“If there’s even a bit of a hill he can’t do it himself so I have to push him everywhere – he’s eight now and getting bigger and just wants to do it himself.”