Following a weekend of huge delays, the port in southern England has returned to ‘normal’ but more delays are feared. 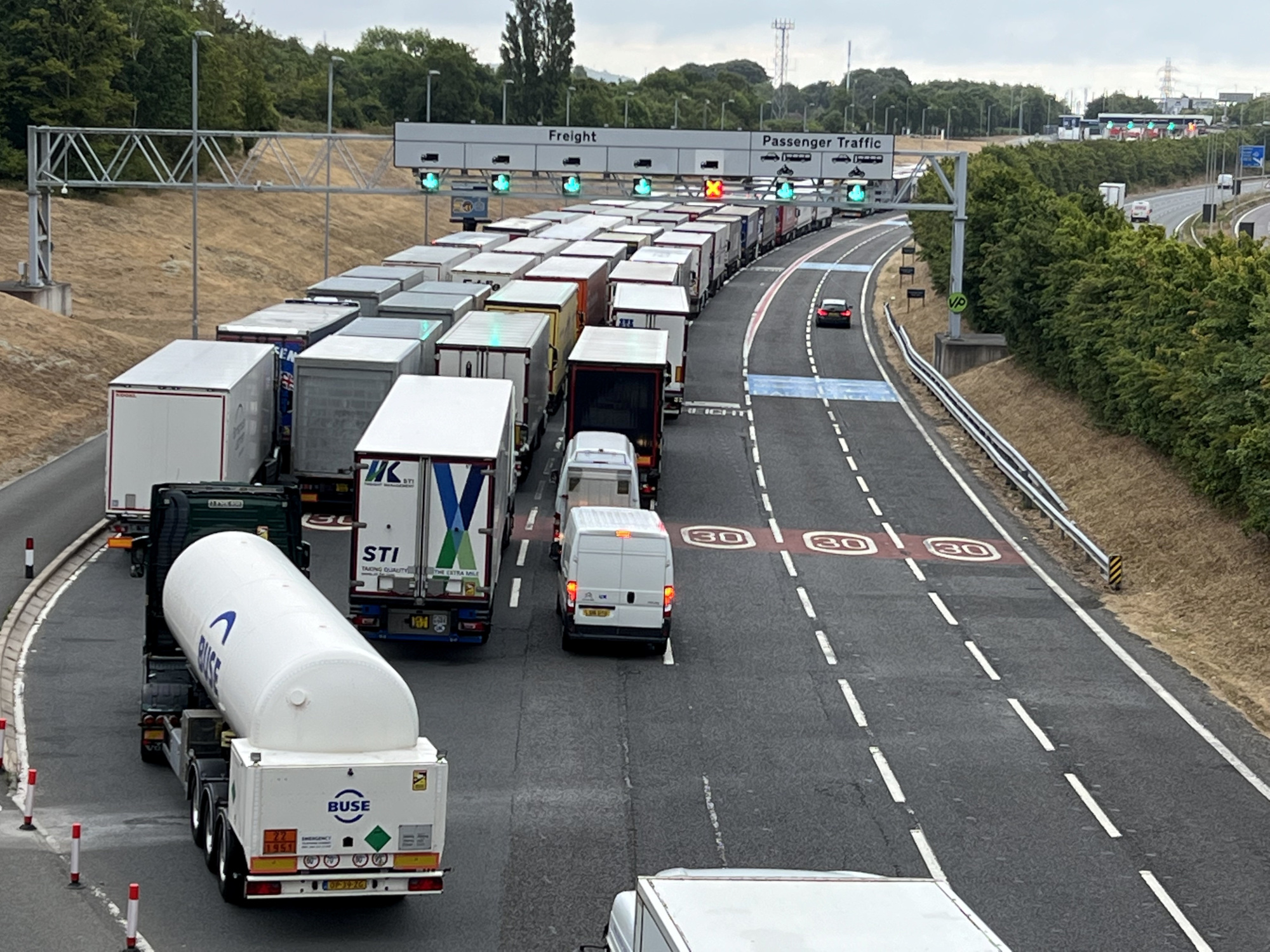 Vacationers' vehicles slowly moving after waiting for nearly 21 hours to cross the Channel amidst traffic chaos at the Port of Dover, in the United Kingdom, on July 25, 2022. (KMG, SWNS/Zenger)

Further traffic chaos is feared at the Port of Dover, in the U.K., after a weekend of some vacationers having to wait 21 hours to cross the English Channel.

Following a weekend of huge delays, the port in southern England has returned to ‘normal’ but more delays are feared, experts warned.

On the morning of Monday, July 25, a steady flow of vehicles could be seen heading towards the Channel tunnel on a reopened M20 after disruptions cleared on the previous day.

The motorway was shut from Junction 8 to Junction 11 for much of the weekend, but has now been reopened fully with Operation Brock still in place – where lorries are parked along the side of the motorway.

But while the situation is better than over the weekend, motorists are being warned to expect conditions to worsen as the week goes on.

The announcement comes as the Automobile Association of the United Kingdom (AA) branded nearby Folkestone Eurotunnel crossing as the new “hotspot of holiday hell.”

Jack Cousens, head of roads policy for AA, said: “This has been an incredible weekend of traffic jams into Dover and Folkestone, and holidaymakers will have been frustrated and angry at the delays.

“We are concerned that we could be in for a repeat of this congestion across the summer.”

About 72,000 passengers – more than 200 miles of tourist and freight traffic combined – had been processed across the weekend up until Sunday morning, July 24.

Extra post-Brexit border checks and French authorities’ understaffing of checkpoints in Dover have been blamed for the hold-ups.

The government insisted changes to border control measures after Brexit did not have a “significant role” in the disruption at Dover, reiterating its stance that problems occurred because French authorities did not provide enough border officials on Friday, July 22, during what was a peak period of travel.

A spokesman said: “We will continue work with the relevant authorities and operators to minimize disruption and provide on-the-ground support.”

Port chief executive Doug Bannister thanked travelers and Dover residents for their understanding during what he described as a “challenging period”, and said he was “incredibly grateful to everyone who has turned this situation around, from the French and UK authorities to our ferry operators, Kent partners and our own port staff”.

The port says its “summer plan will work for the rest of the holiday period”.

Meanwhile, the government has refused to comment on reports that it rejected a bid for more passport booths at Dover that could have helped ease the long delays.

The Department for Transport said it would not comment on individual bids for money from the Port Infrastructure Fund in 2020.

A request for 33 million British pounds ($39.5 million) to double the number of passport booths at the port from five to 10 was reportedly rejected.

“The fund was open to all ports in England, Scotland and Wales and bids were reviewed and awarded in a fair and transparent manner, based on robust and viable applications. We do not comment on individual bids or business cases.

“The issues at Dover this weekend were caused by a shortage of French border control staff during an exceptionally busy period, combined with serious traffic disruption on the M20.

“Additional booths for the French were installed ahead of the weekend, but weren’t fully used on Friday morning.”

Under agreements with the French authorities, passport checks are made at Dover to help avoid delays to travelers when they reach Calais in France.

Under reciprocal bilateral agreements, passports are permitted to be checked by the French before travelers board the ferry or train to ease traffic flows. Similar checks are made by U.K. border controls on the French side.

Folkestone county councilor Rory Love said: “If the French authorities are to insist on 100 percent full inspections, they need to put in the resources to deal with that.

“This is very much down to them… if half of them don’t turn up for work, that is their problem.”

Dover said at the weekend it was “deeply frustrated” at the level of resources committed by the French Police aux Frontières (PAF), that was said to be half the amount of workers needed to carry out the necessary checks.