The footage was obtained from the 79th Air Assault Brigade of the Ukrainian Air Assault Forces on Monday, July 25. 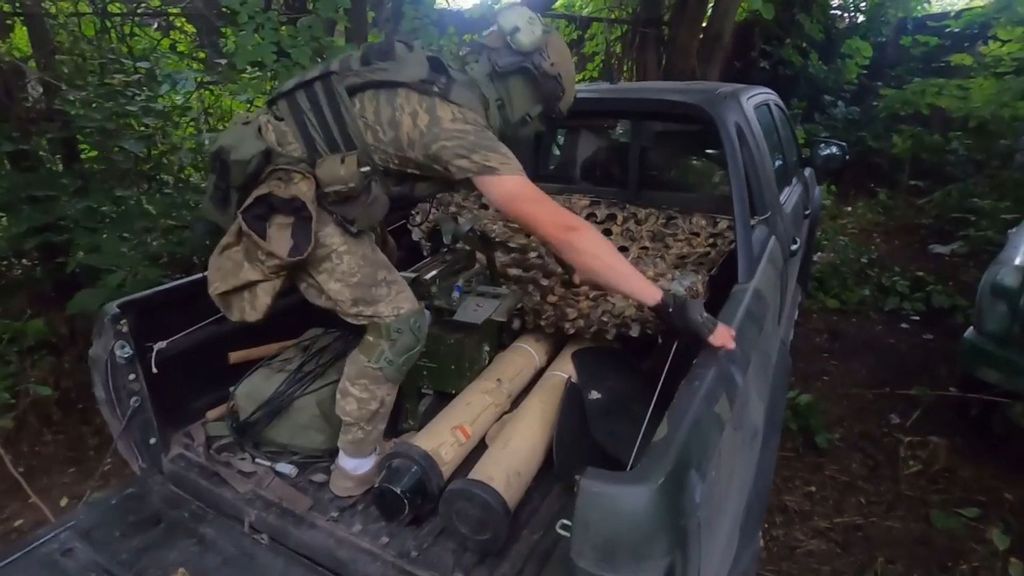 Solider from the 79th separate amphibious assault brigade prepares the military equipment in the back of the military vehicle in the area of ​​the Vikonannya Zavdan in the Donetsk region in Ukraine in undated footage. (@AFUStratCom/Zenger)

It was not immediately clear what time period these numbers cover.

The 79th Air Assault Brigade also said: “The anti-tank unit of the 79th separate amphibious assault brigade of the Ukrainian Armed Forces continues to destroy the enemy’s armored vehicles in the area of &ZeroWidthSpace;&ZeroWidthSpace;the mission in Donbas.

“After receiving the order, the anti-tankers quickly advance to the most tank-dangerous areas and burn the enemy’s equipment at a distance of 2.5 to 5 kilometers [1.5 to 3 miles] with the accurate fire of anti-tank guided missiles. The soldiers have 10 tanks and 15 armored personnel carriers destroyed thanks to the skillful actions of anti-tank soldiers. The unit is armed with both domestically developed anti-tank missiles and imported types of these weapons.

“The soldiers explain the secrets of their success to the coherence of the actions of combat calculations, as well as to the high motivation of the fighters.”

In the footage, a first soldier says “Catch this, b*tches!” as a missile is fired. A second soldier then says “Well done!” as missile hits its target. A third then says: “Next! Now catch the second shot!”

The footage then cuts to a fourth serviceman, who explains: “Our unit performs tasks such as the destruction of lightly armored and heavily armored vehicles, helicopters. We moved in the direction of tanks, there was a successful launch, first a Kamaz [truck] and an armored personnel carrier were destroyed.”f

A fifth soldier then says: “A tank was driving 1.5 kilometers [1 mile] from us, we quickly prepared, and landed a direct hit right on the tank’s turret.”

The fourth soldier then says: “We destroyed two more tanks, the enemy’s personnel were scattered and dispersed, as they began to burn. The guys were very pleased with us, as they saw that our gunnery had a very successful effect, that it could destroy lightly armored vehicles and even tanks.”

The footage then cuts back to his colleague, with the soldier saying: “We feel great joy, minus one tank. We’re just protecting our country the way we’re supposed to.”

None of the Ukrainian soldiers in the footage were named.

It is currently unclear where exactly in Ukraine the images were filmed, but they were also relayed by the Office of Strategic Communications (StratCom) of the Armed Forces of Ukraine.

Zenger News contacted 79th Air Assault Brigade for further comment, as well as the Russian Ministry of Defense, but had not received a reply at the time of writing.