Three fire engines and a bulk water carrier were called to the scene to help extinguish the blaze on Sunday, July 24. 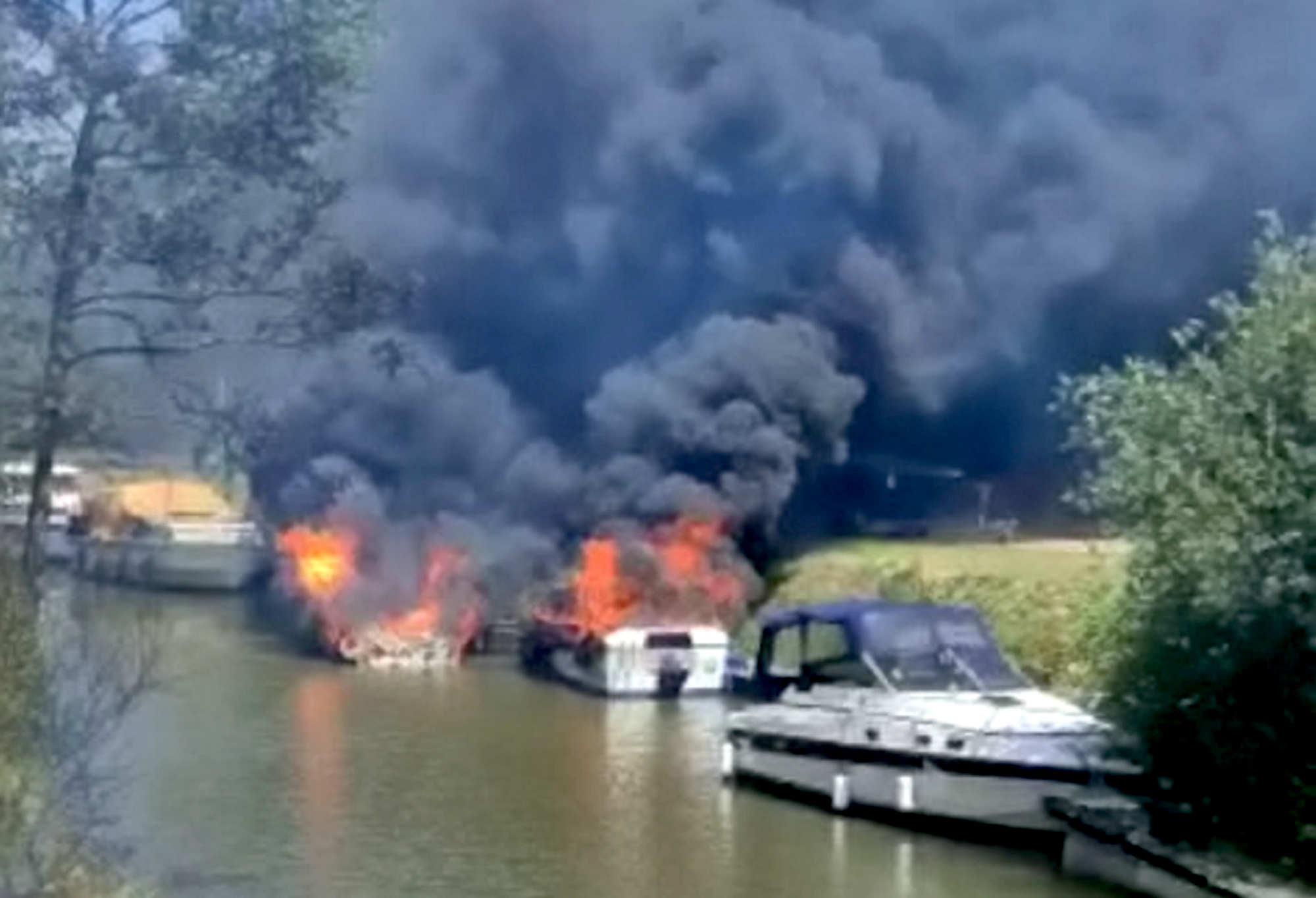 Multiple boats burning at in Hampstead Marina in the River Medway, in southern England, in the United Kingdom, on July 24, 2022. (Rory Milner, SWNS/Zenger)

Two people were taken to a local hospital after a huge fire engulfed several boats at a marina – leaving some vessels completely gutted.

Desperate neighbors threw buckets of water to try and put out the flames after the blaze began in Hampstead Marina at Yalding near Maidstone in Kent in southern England, in the United Kingdom.

Multiple boats in the River Medway were on fire and smoke could be seen pouring from one vessel close to the lock. The river was closed to traffic.

Three fire engines and a bulk water carrier were called to the scene to help extinguish the blaze on the afternoon of Sunday, July 24.

Two people were treated by paramedics and taken to the hospital – one suffered burns while the other was treated for smoke inhalation, the fire brigade said.

Images show the shocking scene as one boat was on fire as it drifted toward other vessels, setting them ablaze too in the marina.

The clip captured a boat drifting in the marina, while onlookers shouted for help as banging noises – thought to be explosions – could be heard.

It then led to several other boats catching light, and thick black smoke could be seen pouring from the top of the vessels.

Several neighbors, including an off-duty firefighter, rushed out with buckets of water to help dampen down the inferno before the fire crews arrived.

It took around two and half hours to extinguish the flames and some of the stricken boats were so badly damaged they sank.

A nearby resident, who witnessed the events unfold, said there was lots of billowing black, heavy, thick smoke and panicked people.

She said: “We heard an explosion, went into our bedroom and saw the boat on fire in the lock just floating.

“I called 999 [the U.K.’s Emergency Services] immediately and at this point the boat had started to drift away from the lock downstream.

“I told the fire brigade it was about to set fire to another boat, but it missed and ended up coming towards our house, which was horrifically scary.

“My partner and I ran outside and hosed down our house and the surrounding area, to try to stop a bushfire from happening.”

She explained how residents came together to save the community, adding: “The team spirit was phenomenal.

“Everyone concentrated on stopping any more bush fires – we were throwing buckets of water and soaking the land down the pathway by the river.

“One man who owned one of the boats that was moored up managed to save it by moving it out of the way. But all the other boats that had no owner at the time caught fire – it was like a domino effect.

“There were several explosions, up into the 20’s – the first boat exploded several times, it was quite terrifying.

“A couple of boats have now sunk, and there are half-torched boats just left there, it’s really, really sad.”

The cause of the fire has not yet been confirmed by investigators.