The pair, from Ravenswood had their wedding reception with just their mothers and their registrar during the May 2021 lockdown. 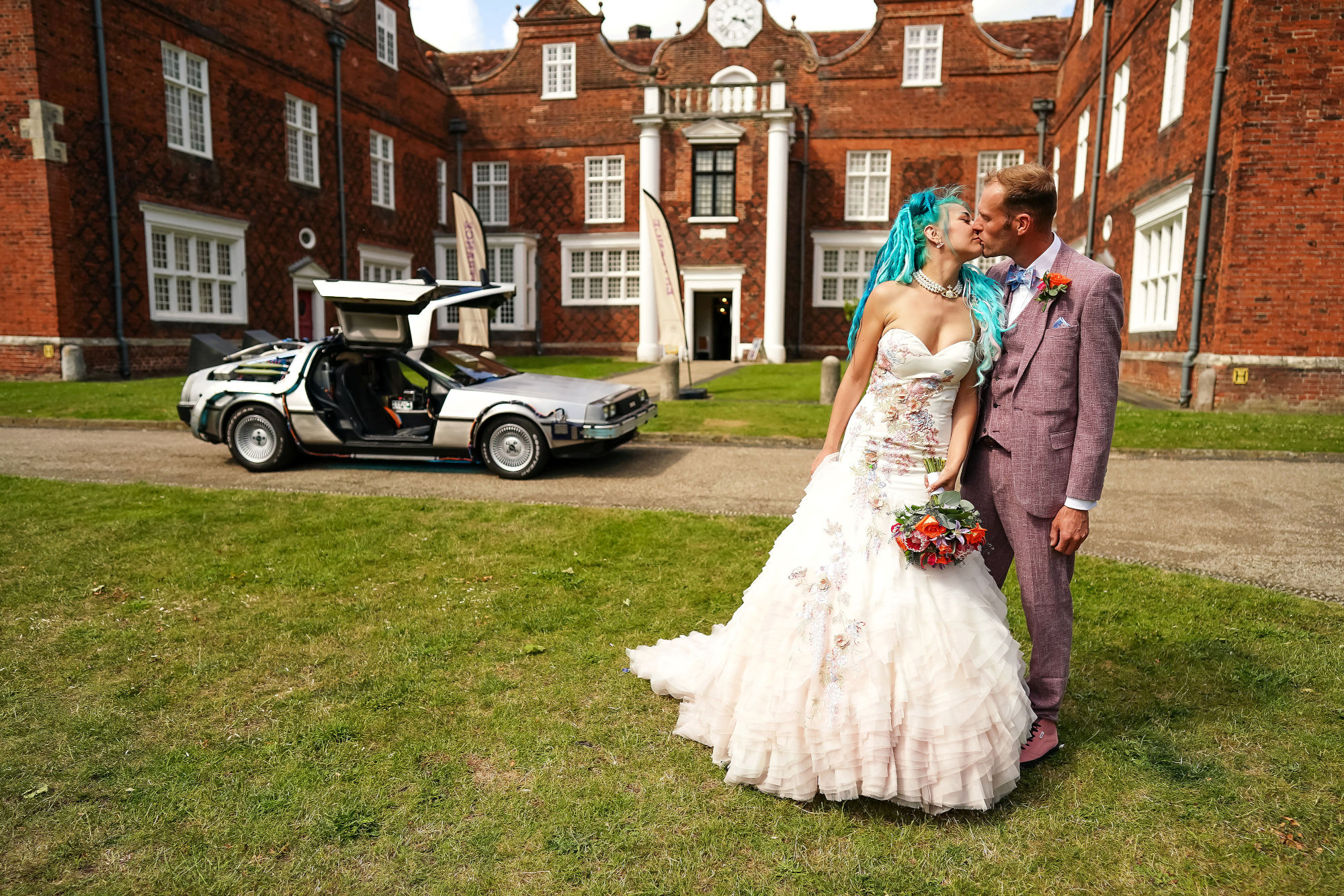 Sci-fans Jordan and Pete Ayriss pose for a picture at their Back To The Future-themed wedding on Saturday, June 11. The couple arrived at their wedding in a replica of the famous DeLorean. (Stephen Waller, SWNS/Zenger)

A couple have finally celebrated their delayed lockdown wedding with an epic Back To The Future-themed celebration.

Sci-fi fans Jordan, 33, and Pete Ayriss, 38, were able to celebrate their love in true 80s style – they even had a DeLorean car, made famous by the hit movies.

The pair, from Ravenswood, whis is located in Suffolk, in the United Kingdom, had their wedding reception with just their mothers and their registrar during the May 2021 lockdown.

Disappointed at not being able to celebrate with their friends and family, over a year later they have finally been able to mark the occasion.

The couple had 70 guests at the Manor Room in Christchurch Mansion on Saturday, June 11- a wedding the pair admit they had been planning “since forever.”

Perhaps the biggest movie plug at the special event was when the pair arrived in a replica DeLorean.

Ayriss, who is originally from Felixstowe, in Suffolk, in the U.K., said: “We are huge fans – the Back to the Future films are one of the anchors for our relationship.

“It is a completely iconic trilogy and something Jordan and I both bonded on immediately.”

Ayriss, who works internationally operating drones for the film industry, said: “I’ve never seen a DeLorean until our wedding day – never up close and definitely not sat in one.

“It’s got everything in it: time circuits, the switches at the top, even a hoverboard!

“It was the coolest thing and so special.”

She said the day was a whirlwind and that she had such a high when she saw the DeLorean for the first time.

The pair even had such a great time that whilst celebrating on the dance floor Jordan suffered a fracture to one wrist and a sprain to the other – when her wedding dress train came unattached causing her to fall over.

Ayriss said: “We had been planning it for years – it feels like forever!

“The first thing we booked was the DeLorean, we were like we’re having the car – there wasn’t an option for us not to have it.

“The whole event was 50s, 80s, futuristic, with a bit of steampunk and Victorian.”

The venue was decorated in accordance with its enchanting theme – which Pete and Jordan admit they mainly organized themselves.

“We managed to transform the whole place – covering the hall in glittery curtains, posters, a hoverboard”, said Ayriss.

“We’ve seen the show at the Adelphi Theater in London too, and we even nabbed little details from the theatre decor.

“That gave us inspiration for the big clock that we made ourselves, just using a foam board, black spray paint and bedsheet.

“The whole wedding cost under 5,000 pounds [$6,025] – we didn’t want to spend a crazy amount of money and think we definitely achieved an epic wedding for a great cost.”

The vegan couple even had a plant-based wedding cake topper, which referenced to the film’s third franchise with Pete dressed as Doc Brown and Jordan as Clara on a hoverboard.

Jordan and Pete have been together for nearly five years after meeting online, and bonded over their love of “nerdiness and sci-fi.”

Ayriss said: “I remember when I was a kid watching the VHS of Back to the Future – my Granddad introduced them to me and ever since I’ve absolutely adored them.

“When Jordan and I started speaking and we realized we both mutually adore it, sharing random facts, quoting the films – it was great!

“We’ve seen it at the Adelphi Theater in London too, and we even nabbed little details from the theater decor

“I was up to 3 a.m. on the morning of our wedding still making tiles for the Plutonium bar!”.

The bride said: “Back to the Future was the first thing we found we both knew all the words too, all three films.

I don’t think I would have met him otherwise, we’re not in any of the same circles. I was able to find exactly what I was looking for.”

Ayriss proposed in the couple’s living room in 2019 after offering to do Jordan’s nails.

He had hidden the ring in the garage and went to collect it when he was grabbing potatoes for the couple’s roast dinner and surprised his now wife.

He said: “I thought it was a really great moment, stuffed it in my pocket – the finger on her left hand needed a bit of filing and said ‘I have the perfect way to finish that’.

“That’s when I held the ring up and 20 minutes later when she finished crying she said yes!”