Treasured Wedding Photo Returned To Couple After Being Mistakenly Donated

The couple have now been reunited with the photograph just days before their 57th wedding anniversary on August 5.
By Darko Manevski July 26, 2022
Facebook
Twitter
Linkedin
Email 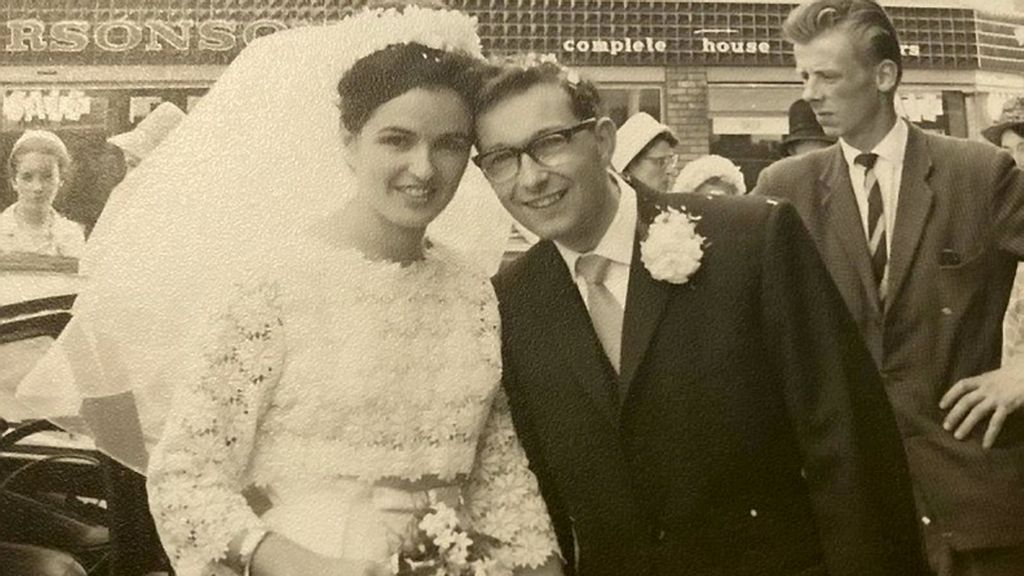 John Lawes and his wife Margaret on their wedding day in 1965, posing for a picture that they accidentally lost in a book they donated to charity, and found it 3 years later. (Esther Greenwood, SWNS/Zenger)

A devoted couple who lost their wedding photograph from 1965 have been reunited with it after it fell inside a book which they donated to charity.

John Lawes, 83, and his wife Margaret, 80, feared the precious image of them standing by their chauffeur-driven car was gone for good when it vanished during a house move.

But the couple were stunned when a relative spotted the sepia picture on a Facebook appeal after it was found in a Royal Society for the Prevention of Cruelty to Animals (RSPCA) shop three years later.

Their family say the snapshot, on a cardboard frame, must have slipped inside a book which John then unknowingly donated to the charity.

The couple, from Northampton in England’s Midlands region, in the United Kingdom, have now been reunited with the photograph just days before their 57th wedding anniversary on August 5.

Their eldest daughter Esther Greenwood, 55, said: “It was amazing to see a photo of my mom and dad that I don’t recall ever seeing before.

“Dad was always giving things to charities but even he has no idea how the photo ended up there.

“They look so dapper and so happy together.

“We think the picture somehow slipped inside the pages of a book and then dad must have taken it to the charity shop.

“They took a load of things to the charity shop when they moved into a bungalow three years ago so it must have been lost then.

“We found out the picture had been found when my aunt who was at the wedding saw it on Facebook.

“The RSPCA were appealing for people to come forward if they knew the couple so they could reunite them with it.

“After we claimed it the RSPCA posted it back to mom and dad and it’s arrived just in time for their anniversary which is lovely timing.”

The photo was taken on August 5, 1965, after the couple tied the know at Queensgrove Methodist Church in Northampton, in the U.K.

The picture shows the couple touching their heads together which their family say is a romantic gesture they still do today.

Lawes, who was a teacher at the time, and Margaret, a nurse, went on to have four children and eight grandchildren.

They also traveled to Nigeria as missionaries at the height of the civil war in 1967 with Lawes teaching at a school and his wife working in a hospital.

The image turned up at the RSPCA’s new Retro Rooms and Boutique shop in Wellingborough, England.

Assistant manager Viktoria Brice found it while sorting through donated items and posted the picture on Facebook.

She said: “In my heart I felt this photo shouldn’t be in a charity shop, and I wondered if I could find the owners – and then the magic happened.

“Within a day it had been recognized.”

“We’re both thrilled to be reunited with the picture and it’s lovely to reminisce about our very special day.”