"I want them to see the pictures of them with my graduation and be inspired."
By Darko Manevski July 26, 2022
Facebook
Twitter
Linkedin
Email 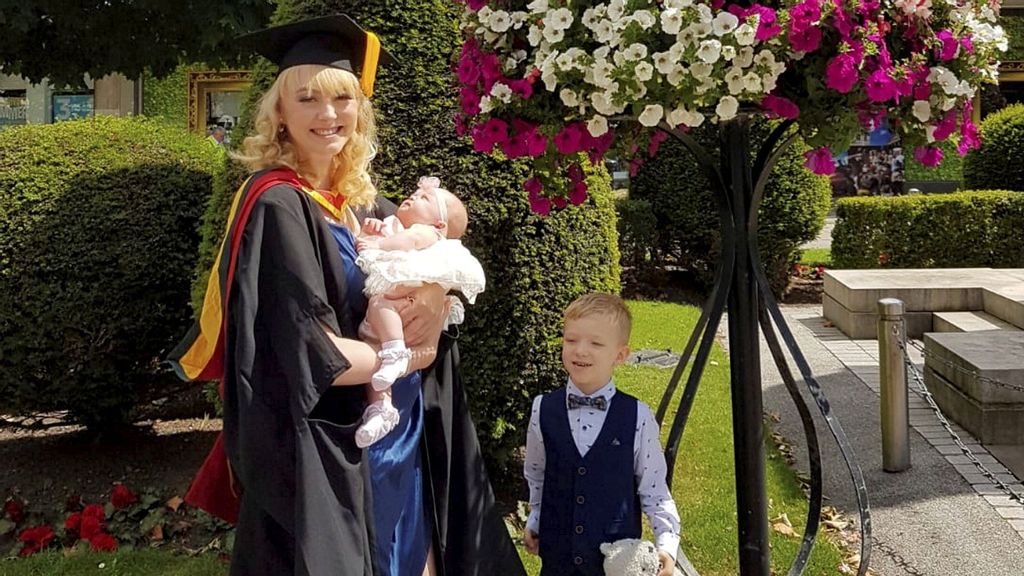 Stacey Withington posing for a picture at her master's graduation ceremony which she attended with her two kids, after previously being told she won't be able to have children, in an undated photograph. (Jon Mills, SWNS/Zenger News)

A mom who was told she’d never have kids has graduated with a master’s degree accompanied by her two children – who she was pregnant with while she studied.

Stacey Withington, 34, ‘left school with nothing’ but now – 18 years later, she has posed for an adorable photo with son Jamie, 4, and nine-week-old daughter Sophia.

She gained a distinction in her master’s degree in counseling and positive psychology which she completed while pregnant with her daughter.

It followed a first-class honors degree in criminological forensic psychology, which she gained in 2019 after giving birth to Jamie during her studies in October 2017.

Withington said: “I remember just sitting there and looking at the stage getting a bit emotional. My little boy was sat there and he kept smiling at me.

“My mom and dad offered to look after the children for the day but I wanted them to be there and be in the pictures to show them it can be done.

“I want them to see the pictures of them with my graduation and be inspired.”

Withington, of Bolton, located in Greater Manchester, in the United Kingdom, left school with no GCSEs (General Certificate of Secondary Education) above D grade in 2004 and started working at the ASDA supermarket chain while studying childcare at college.

Around the same time, she went to the doctor’s to seek contraception advice, but was told by a doctor she wouldn’t have kids because her periods were so irregular.

But after falling in love with Psychology, she enrolled in an access course in 2014, which allowed her to embark on her undergrad course in 2016.

And during her second year, she was shocked to find out she was pregnant with Jamie.

She suffered from cholestasis during her pregnancy, which caused complications that almost killed Jamie during labor.

But just two weeks after giving birth, she was back in lectures and completing her course.

She said: “I had to do six pregnancy tests before I believed them.

“I fell pregnant bang in the middle of my second year and I gave birth in October of the third year. I was induced at eight months due to the risk of stillbirth.

“His heart rate was dangerously low and the emergency team had to come and get him out.

“Two weeks after giving birth, I was back in the lecture halls. I knew my third year was the most important so I didn’t want to fall behind.

“My mom and dad were quite a big support and our childminder lives round the corner so I was straight back into it.”

History repeated itself while she was studying for her master’s when she fell pregnant again with Sophie – and again she suffered from cholestasis.

This time, she almost died during labor after being rushed for an emergency C-section and losing too much blood.

She added: “I always knew I wanted to do a master’s and I knew which course I wanted to do. It was meant to be an 18-month course but it was extended due to COVID.

“In October last year, I found out I was pregnant with Sophia. It was a happy surprise.

“We’d spoken about trying again as we were aware I could have children, but we weren’t trying at the time, she just happened happily.

“When I was pregnant with Jamie, I was diagnosed with cholestasis in the third trimester, but with Sophia I had it from day dot.

“I was in hospital every week and was treated for asthma caused by pregnancy.”

During the pregnancy she also caught COVID and was induced earlier than she was with Jamie.

But after a few weeks of recovery after another traumatic labor, she was completing her dissertation that helped her complete a second top-class degree.

Withington also completed her master’s course while running the Beyoutiful Reflections, a private counseling practice which offers therapy sessions that she co-owns.

And earlier this month, little Sophia joined her brother and dad to watch Withington’s graduation ceremony at The Albert Halls in Bolton.

Withington added: “If somebody was to tell me years ago that I’d be graduating with two degrees and I’d do so well I’d never have believed that.

“When I left school, I thought I’d be working at ASDA for the rest of my life.”