By 12 months the United Kingdom has the lowest rates of breastfeeding in the world – just 0.5 percent. 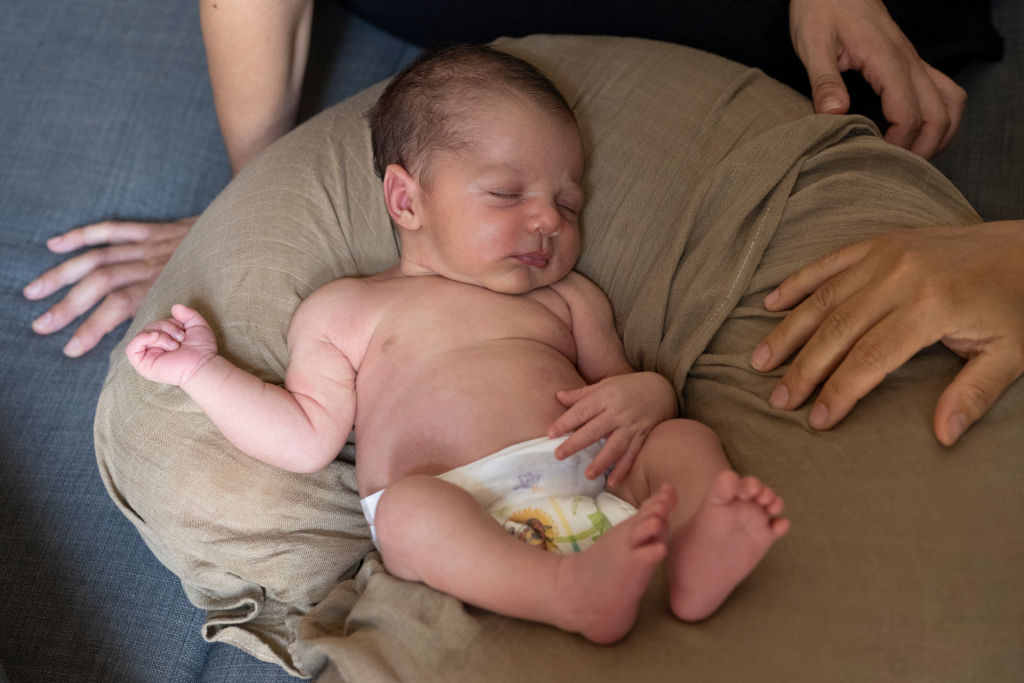 A new born during the home breastfeeding assistance with one of the midwives of the Prima Luce maternity home, on June 17, 2022 in Turin, Italy. (Photo by Diana Bagnoli/Getty Images).

Babies breastfed for a year or more could be protected against obesity – into adulthood, according to new research.

In experiments rodent pups given mother’s milk for prolonged periods didn’t put on weight after they grew up – even when fed junk food.

It could protect people against the harmful effects of fatty and sugary diets – for decades, say scientists.

Delayed weaning protected the rats against obesity later in life. The same is expected to apply to humans.

By 12 months the United Kingdom has the lowest rates of breastfeeding in the world – just 0.5 percent.

Corresponding author Professor Ruben Nogueiras, of Santiago of Compostela University in Spain, said: “Rodent pups that are allowed to breastfeed for longer are less likely to become obese during adulthood – even when exposed to a high-fat diet.”

The study, published in the journal Nature Metabolism, also identified a biological mechanism that explains the phenomenon.

Prof. Nogueiras said: “It can reach the hypothalamus – a region in the brain that plays a key role in controlling energy consumption and utilization in the body.

“This in turn leads to increased mobilization and use of fat tissue, as well as increased energy expenditure.”

The findings shed fresh light on the long-lasting benefits of breastfeeding.

Previous research has suggested it reduces the risk of metabolic conditions such as obesity and type 2 diabetes – the form linked to unhealthy lifestyles.

Nogueiras said: “Early-life determinants are thought to be a major factor in the rapid increase of obesity.

“However, while maternal nutrition has been extensively studied, the effects of breastfeeding by the infant on the reprogramming of energy balance in childhood
and throughout adulthood remain largely unknown.

“Here we show that delayed weaning in rat pups protects them against diet-induced obesity in adulthood, through enhanced brown adipose tissue thermogenesis and energy expenditure.

Prof. Nogueiras said: “Rats subjected to delayed weaning and given a chow diet did not differ in terms of body weight from those subjected to the standard time and the same
diet.

“However, when the former were fed a high-fat diet their body weight was substantially
lower than that of the latter given it for the same period of time.”

Long-term breastfeeding in humans is when it continues beyond a baby’s first year. In many societies the age of weaning ranges from two to four years.

The World Health Organisation (WHO) advises moms to breastfeed for two years. But many women feel uncomfortable about breastfeeding in public.

Kristin Stanford, of The Ohio State University who was not involved in the study, said it paves the way for clinical trials to better understand breastfeeding’s metabolic benefits.

She said: “In recent years, the increasing prevalence of metabolic diseases and comorbidities has made the study of developmental biology evolve from a focus on the genetic inheritance of pathologies to the acquisition of non-genetic metabolic traits at the earliest age.

“From this point of view, pregnancy and lactation represent the first and most critical window to determine such traits, which can develop from early childhood to adulthood.

“Thus, maternal factors contribute to the development of pathologies caused by a holistic combination of genetic and non-genetic inheritance and lifestyle.”

New mothers are advised to breastfeed exclusively for around the first six months of their baby’s life.

The NHS says it reduces the risk of infections, diarrhea and vomiting, sudden infant death syndrome (SIDS), obesity and cardiovascular disease in adulthood.