An Apple A Day Can Keep Depression At Bay

The study comes shortly before the U.K. will restrict processed snack foods at store checkouts. 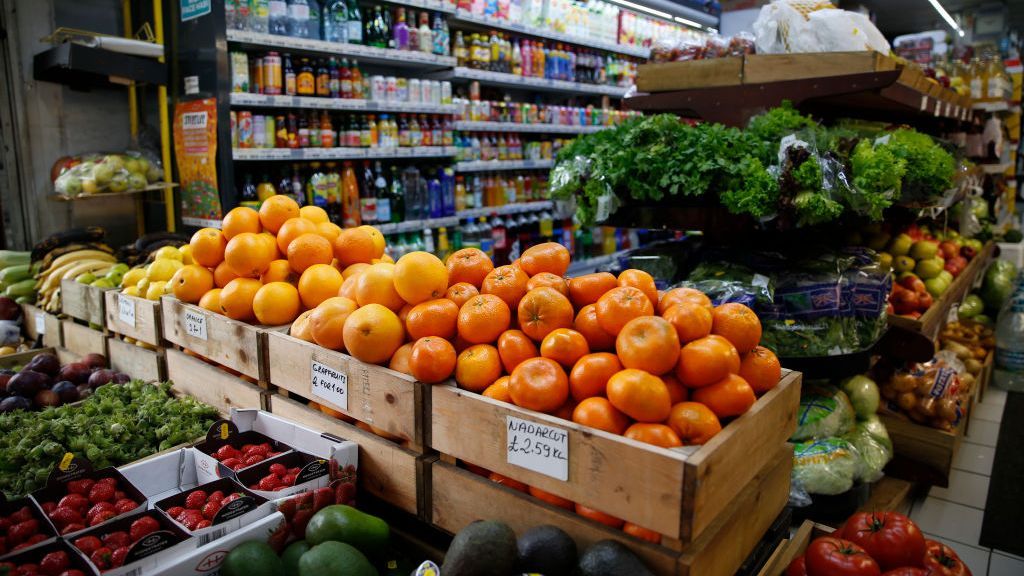 General view of fresh fruit and vegetable produce displayed outside a shop on Green Lanes in Haringey on February 28, 2021 in London, England. (Photo by Hollie Adams/Getty Images)

Frequent eating of fruit contributes not only to physical well-being but also to a positive mental outlook, a new study finds.

Researchers at Aston University in England, in the United Kingdom, found that people who frequently eat fruit are less likely to report symptoms of depression than those who refrain.

On the other hand, salty low-nutrient savory snacks such as chips and french fries were associated with heightened levels of anxiety.

The study comes shortly before the U.K. will restrict processed snack foods at store checkouts.

According to the study published in the British Journal of Nutrition, a survey of 428 British adults examine how the eating of fruit and vegetables and sweet and savory snacks was linked to their mental state.

Researcher Nicola-Jayne Tuck said: “Very little is known about how diet may affect mental health and well-being, and while we did not directly examine causality here, our findings could suggest that frequently snacking on nutrient-poor savory foods may increase everyday mental lapses, which in turn reduces psychological health.”

Savory snacks such as chips were associated with “everyday mental lapses,” also known as subjective cognitive failures among the respondents, who also reported lessened mental well-being.

There was no such linkage between these memory lapses and the consumption of fruit, vegetables, or sweet snacks.

For the researchers, this means there is a unique relationship between everyday mental lapses and psychological health with nutrient-poor savory snacks, while there was no link between mental lapses and the intake of fruit and vegetables.

Dixon said that both fruit and veggies are rich in antioxidants, fiber, and micronutrients that promote brain function; but these nutrients can be lost during cooking, she said.

Raw fruit, the study suggests, may explain its stronger influence on our psychological health.

In an email to Zenger News, Research Assistant Professor Erica Jansen of the University of Michigan cautioned against “over-interpretation of these results,” adding that the patterns of eating were collected with a “very short food frequency questionnaire that did not consider all aspects of the diet or individual types of fruits and vegetables.”

She wrote: “One possibility is that fruit intake was simply measured more accurately in this short questionnaire, and that’s why there was a stronger relationship.”

Research Professor Zora Djuric of the University of Michigan confirmed for Zenger News in an email that the food frequency questionnaire is “not a very good way to assess diet.”

Because vegetable intake in the study was low, she said it “makes it hard if not impossible to find a protective effect of vegetables.”

“In a cross-sectional study such as this one where you simply enroll people and look at what explains variations between people in psychological well-being,” Djuric wrote, “how can you exclude the fact that people who are worse off may be self-selecting comfort foods like savory snacks in an effort to feel good? (chicken/egg issue).”

She also suggested that a feeding study would be the only way to prove that eating more of a certain food is associated with making people feel better.

While agreeing that some nutrients may be lost during cooking, Djuric said that some micronutrients, such as lycopene (found in watermelons, red carrots, and grapefruit), are absorbed more fully when broken down by cooking.

“So we generally recommend that people eat a mix of raw/cooked fruit and vegetables,” she wrote.

“With regard to fruit, it may be worthwhile to look at vitamin C, which tends to be higher in fruits than veggies, as one factor contributing to well-being effects observed,” she wrote, while adding that vegetables and vegetable compounds are protective of health, as are Mediterranean diets.

Zenger News interviewed University of Michigan professor Ashley Gearhardt, a clinical psychologist and expert widely published in the area of food addiction. “There are limitations to this specific study, so we can’t say cause and effect,” she said.

“But there is a broader movement of thinking of nutritious food as medicine that impacts not only the body but also mental well-being.

“And there is increased skepticism about the highly-processed products that dominate our food environment that may actually be detrimental to our health.

“This is important in the context of kids, but we see that in ultra-processed food. Look at what they eat: it’s a huge chunk of their diet.”

She went on to say that food consumed during children’s formative years and into adolescence should be studied in order to determine its effects on issues such as depression and its broader effects on society and as an issue of social justice.