Bonn University’s squad walked away with the title for the Humanoid AdultSize class, defending their title. 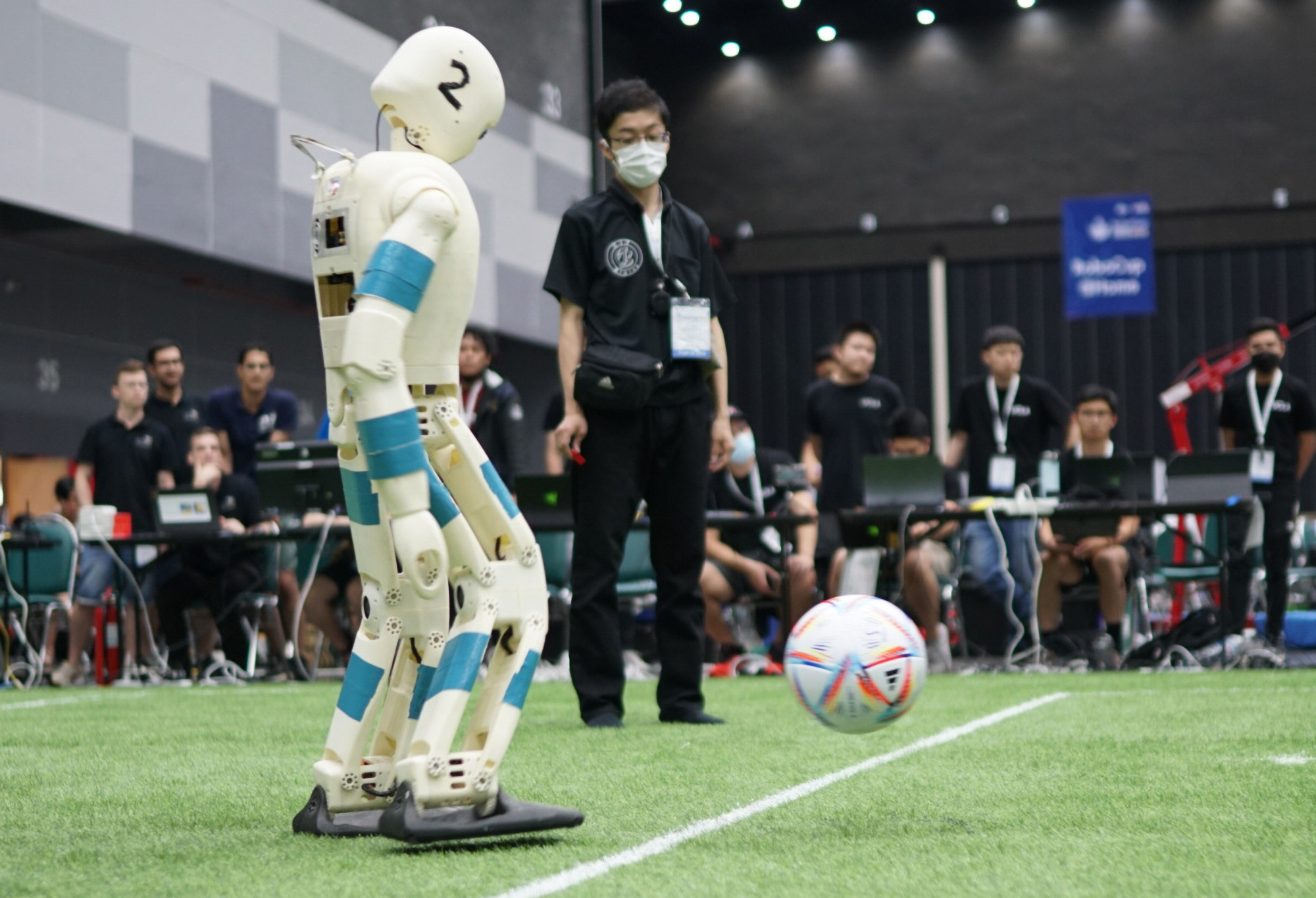 This is the moment robots take part in a bizarre soccer tournament – and just like in real life the German side turns out to be the terminators.

A cyber team from the University of Bonn won the trophy at the world championships in Bangkok, and they did not even have to rely on penalties.

The University Institute of Science’s Team NimbRo had been fitted with new high-tech vision systems to help them spot the ball more accurately.

And astonishingly they claim robot players are becoming so sophisticated they will be able to beat a human international team by 2050.

Bonn University’s squad walked away with the title for the Humanoid AdultSize class, defending their title.

Teams were judges on both head-to-head matches and displays of skills, like kicking balls over obstacles.

Soccer fans might find the video of the robots’ performance a bit like a slow-mo action replay, but there is no doubting their accuracy.

In one scene, a robot shuffles around the goal’s mouth as it calculates the perfect angle and scores as it hits the back of the net with a pinpoint strike.

Proud winners at the university said: “At the RoboCup World Championship in Bangkok, Thailand, Team NimbRo from the University of Bonn won the competition in the Humanoid AdultSize class and successfully defended their title.

“The human-like football [American soccer] robots were developed in the Autonomous Intelligent Systems working group at the Institute for Computer Science.

“They played with an improved vision system and advanced software, and were able to win numerous duels and dribble the ball quickly into the goal.”

Bonn retained its title as robot world champs, which were suspended for two years by the COVID pandemic.

But while they were waiting, the German side say they made breakthroughs in scoring technology.

The university said: “In the meantime, the Bonn team had completed another NimbRo OP2X robot.

“Four capable players were available for the competition.

“Three of the robots were fitted with a new, higher-resolution camera system, allowing them to see the ball, pitch lines and goalposts at greater distances.

“The performance of the on-board computer, which processes the images live and controls the robot’s behavior, has also been significantly increased.”

And the new tech allowed the German side to dominate the contest winning one match against Korea 7-1.

The University said: “In the tournament, the NimbRo team clearly dominated the international competition.

“In four preliminary round games, 36-1 goals were scored. In the final, the robots from Bonn met the HERoEHS team from Hanyang University, Korea. NimbRo won almost all duels and quickly had the ball into the opposing goal. After a halftime score of 5-1, the final ended with 7-1.

“In addition to the main competition, there was also a drop-in tournament where robots from different groups were drawn into teams. Here, the Bonn team clearly won as well.”

They went on: “In addition, technical competitions were held, in which skills that will be important for the game in the future are individually evaluated.

“Here, the robots from the University of Bonn proved that they can regain their balance, accept a pass and shoot the ball into the goal, kick over an obstacle and pass an obstacle, even after strong challenges.

“In these technical competitions, NimbRo scored significantly more points than all other teams.

“The RoboCup is an international initiative with the aim of promoting the further development of intelligent robots through competitions.

“By the year 2050, humanoid football robots will be developed that can win against a reigning human world champion.”

Professor Sven Behnke, head of the Autonomous Intelligent Systems working group at the Institute for Computer Science at the University of Bonn, said: “After a long break, our team made the robots fit again and improved them so they could clearly dominate the competition.”

He added: “Robots that can move quickly and robustly on two legs would also be useful for numerous applications, for example in our everyday environments.”