“I got my friend Steph to ride Erik down the aisle. I asked her ‘will you ride my best man at the wedding?’” 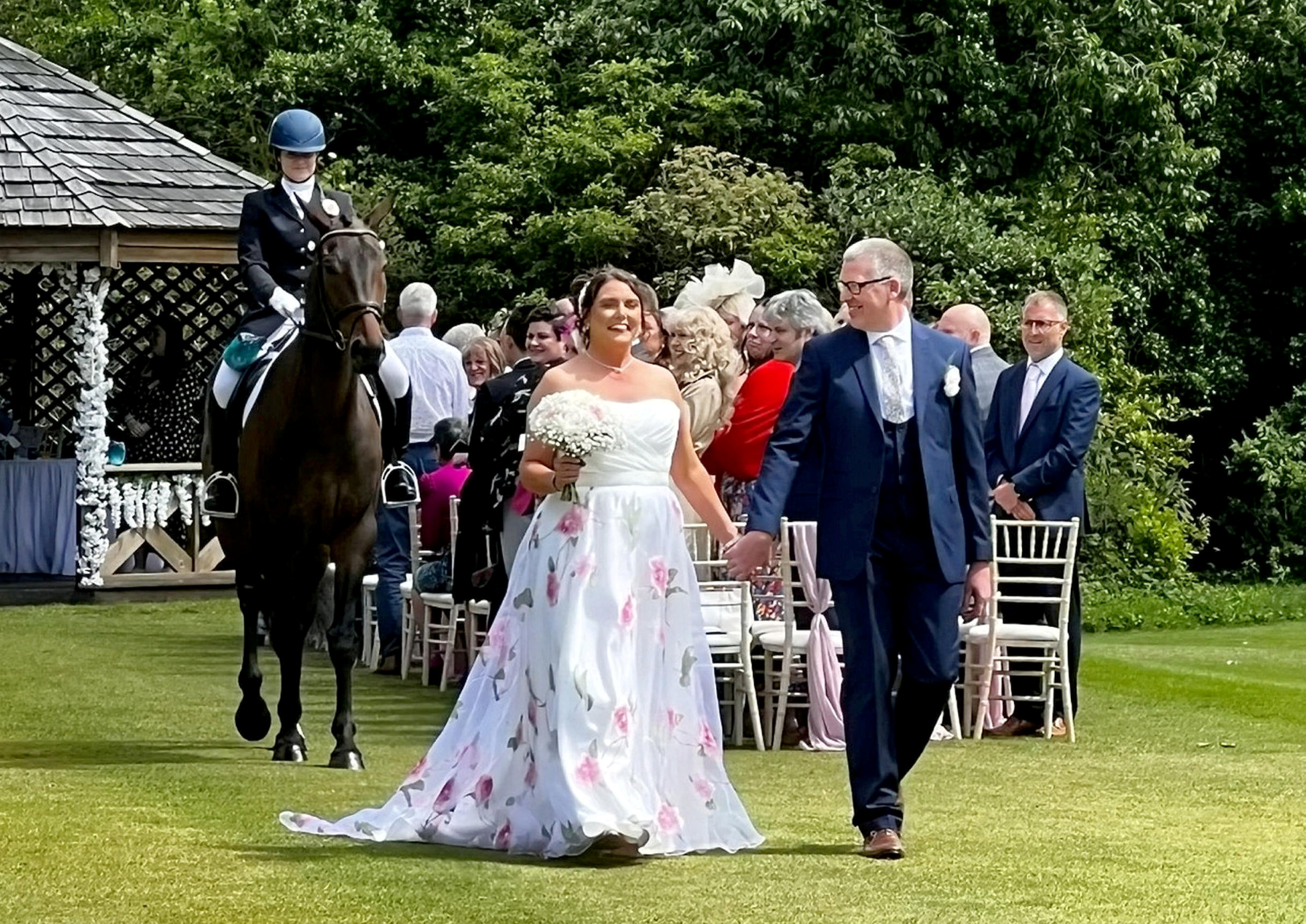 Horse-mad Paul Boyles chose his favorite stallion to be his best man at the wedding. (Steve Chatterley, SWNS/Zenger)

A horse-mad groom chose his favorite stallion as best man – which also joined him and his new bride on honeymoon.

Paul Boyles, 47, secretly arranged for his former racehorse King Erik to trot down the aisle when he and wife Kay, 48, tied the knot.

Touching pictures show the couple on their wedding day followed by ‘best man’ Erik who kept the rings in a special pouch on his saddle.

The happy couple even took 17.2 hands (5.6-foot) tall Erik with them on an 11-day horse trekking honeymoon following their May wedding.

The couple, who don’t have children together and are from Hetton-le-Hole in northern England, in the United Kingdom, bought Erik last year and keep the horse at a stables nearby.

Boyles, a store manager for discount-retail chain Lidl, said: “At first I wasn’t going to have a best man.

“At a wedding, the worst job is being the best man as you have to be funny. You don’t want to give anyone that pressure.

“It got to six months before the wedding and I developed a bond with Erik and I thought I wanted him at the wedding.

“I thought I’d keep it quiet and get my friend Steph to ride Erik down the aisle. I asked her ‘will you ride my best man at the wedding?’

“We went to the hotel with Erik, which was a bit of a secret mission and she rode around the venue.

“She said ‘we’ll give a ride down the aisle a go’.

“I then spent the next few months practicing in an indoor arena getting him used to chairs and the like while Steph got him all dressed up.

“I’d ordered flowers for his mane, it was a complete secret. He had the rings.”

As an extra twist, Boyles arranged for the Black Beauty theme tune to play as Kay entered the George Washington Hotel, where they were getting hitched.

Boyles added: “Kay’s look on her face was of sheer horror when she saw Erik. He was up there from 1 p.m., he left just 3 p.m. and he didn’t put a foot wrong.

“Some of the words that were used were it was like a fairy-tale, it was like a Disney movie. The black beauty music was playing, I love that.

“As soon as we finished the ceremony the sun came out. It was absolutely unbelievable.

“It was a fingers crossed sort of thing.”

The couple even took Erik on their honeymoon to Wales after abandoning their initial plans for a trip to Italy.

Boyles added: “We were originally going to honeymoon in Italy but then I decided that we needed to go away with the horses so we borrowed another horse.

“I booked a place in Wales, Kay didn’t know.

“We spent 11 days there hacking. It was amazing.

“I put a picture on the back of the horsebox saying ‘Just Married’. We had people beeping and cheering.

“It’s not every day that you take your best man on honeymoon.

“I think the bride loves the best man more than the horse. Had she had been able to marry Erik on the day, she would’ve.

“I’ve never ridden before until July 2021, I didn’t actually get on Erik until October.”

Kay, a site manager, said: “We’re just happy that Erik has a wonderful life. He is one loved horse.

“For us it’s one happy story. It was a really special wedding day.

“Erik even walked up the aisle and brought the rings in a little treat bag on the saddle and then stood there while we finished the service.”

After their nuptials, Erik returned to his field and appeared on a live video feed at the reception where he made his best man’s speech.