The grandmother, who has 11 grandkids, first began bopping to the Tom Jones's music in 1965.
By Simona Kitanovska July 25, 2022
Facebook
Twitter
Linkedin
Email 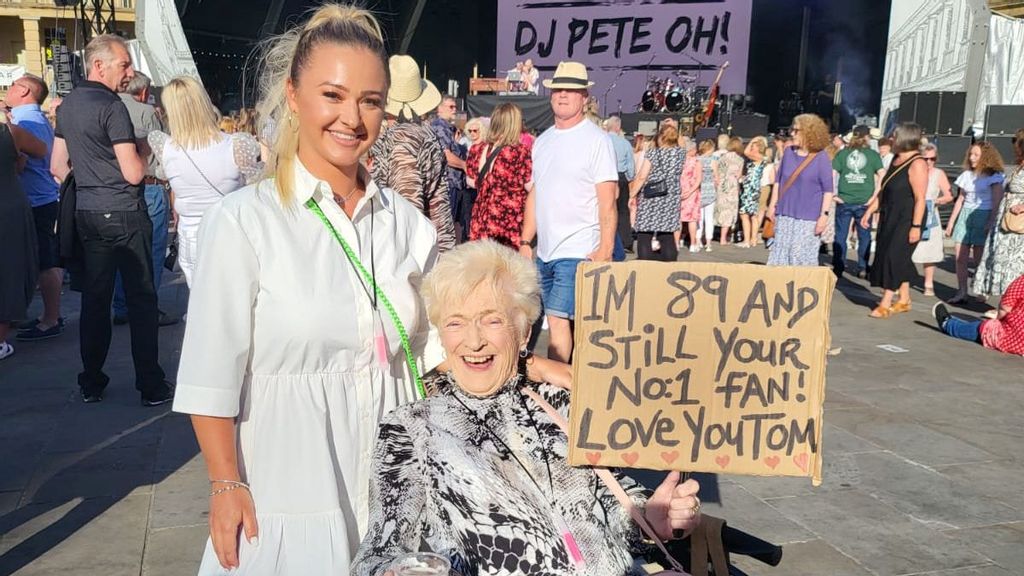 Meet the die-hard Tom Jones fan who stole the show when she saw the Welsh crooner perform for the seventh time - at the age of 89. (Lori Walker, SWSN/Zenger)

Meet the die-hard Tom Jones fan who stole the show when she saw the Welsh crooner perform for the seventh time – at the age of 89.

Sheila Sugden, who sleeps with a cut-out of the ‘Delilah’ singer in her bedroom, was left stunned after her granddaughter, Lori Walker, got her the ticket to the concert.

And the superfan became the real star at the gig last week when she went armed with a sign reading: “I’m 89 and still your No. 1 fan! Love you Tom.”

The grandmother, who has 11 grandkids, first began bopping to the Tom Jones’s music in 1965 after he stormed the charts with his first hit single ‘It’s Not Unusual’.

And Walker, 25, said Sheila had an “absolutely blast” at her most recent concert after a group of ladies got her to the front of the stage – despite coming in a wheelchair.

In particular, as the 82-year-old pop singer began belting out her favorite tracks – including ‘Green Green Grass of Home’ – Lori said Sheila’s face was full of “pure joy”.

She said: “I’ve never seen anyone’s face with so much pure joy. It was absolutely beautiful. She had an absolute blast.

“I couldn’t even look at Tom Jones, I was looking at my nan the whole way through, but she loved ‘Green Grass’, ‘Sex bomb’ and ‘Pussy Cat’.

“Everyone there was looking at the sign, and just kept on saying, “Can we take a picture of you and your nan? That’s amazing!”

“It was just really, really beautiful. It was a phenomenal night, and my nan had an amazing time.”

Sugden thanked her granddaughter for getting her to the concert and said seeing Tom Jones perform again was “a dream come true”.

She said: “Seeing my man, Tom, was a dream come true.

“He sang some lovely songs, and it made my night, and my granddaughter made all this possible. I enjoyed every minute of it.”

Professional dog trainer, Lori, from Halifax, located in England, in the United Kingdom gave the 65-pound ($77) ticket to her grandmother as a surprise Christmas gift with her sister, Tash Palmer, 15, in December.

She’d previously arranged a Tom Jones-themed 85th birthday party for Sheila, who’s been a fan of the legendary singer for over 57 years.

But her grandmother – whose favorite songs include ‘It’s Not Unusual’, ‘Delilah’ and ‘I’ll Never Fall in Love Again’ – was particularly touched by the Christmas present.

Walker explained: “I popped a piece of paper in a Christmas card, and I just wrote, “Merry Christmas! Your Christmas present is to see Tom Jones – but not until July!”

“It was a really, really nice surprise for her. She was in tears. It was such a sweet reaction. She said, “Oh my god! I can’t believe it! I’m so excited.”

Walker said her grandmother then spent the next six months counting down the days until the concert at Halifax Piece Hall, in West Yorkshire, England, on July 10.

And when the special day arrived, she gave her grandmother a full makeover, so that she would look “a million dollars” for the evening performance.

Walker said: “She came over to my house, and I gave her a make-over and did her hair and make-up.I popped her in her outfit, and she looked a million dollars.

“I just wanted her to feel great going to see ‘her man’ Tom Jones, as she calls him.

She added: “Who knows how many times she’ll see Tom Jones again, and I just wanted to make it really, really special for her. I love my nan loads.”

Walker said her grandma soon became a hit with other concert-goers after they began spotting the hand-made sign that she’d made for her grandmother to hold.

She said: “We met these lovely ladies, and they said come on, we’ll help you get to the front with your nan.

“Then they just said to everybody, ‘Excuse me, can you let this lady come through? Look at the sign! She wants to see Tom Jones, and she wants Tom Jones to see her sign.’”

Later, when Tom Jones took to stage at around 8 p.m., the enthusiastic crowd also helped guide the legendary singer’s gaze in Sugden’s direction.

Walker said: “During the concert everyone was like ‘Tom, Tom, look over here! Look at the sign’, and he said, ‘I can’t see it, but whatever you’re all saying, the answer is Yes!’

“He pointed in her direction. Bless him, he’s 82 himself, and I really don’t think he could see the sign, but he kind of acknowledged what everyone was screaming at.”

Walker said despite spending the night propping up her grandma, who suffers from heart issues and diabetes, it was “all worth it” to see the “priceless” look on her face.

Walker said: “I lifted her out of her wheelchair, and I was pretty much like a prop for her to lean on. It was really hard work, I’m not going to lie.

“But it was all worth it after seeing her face. It was priceless to see that.

“I was just thinking, I’m making such precious memories and I’m just going to keep these forever. It was such a special, special moment for me and my nan.”