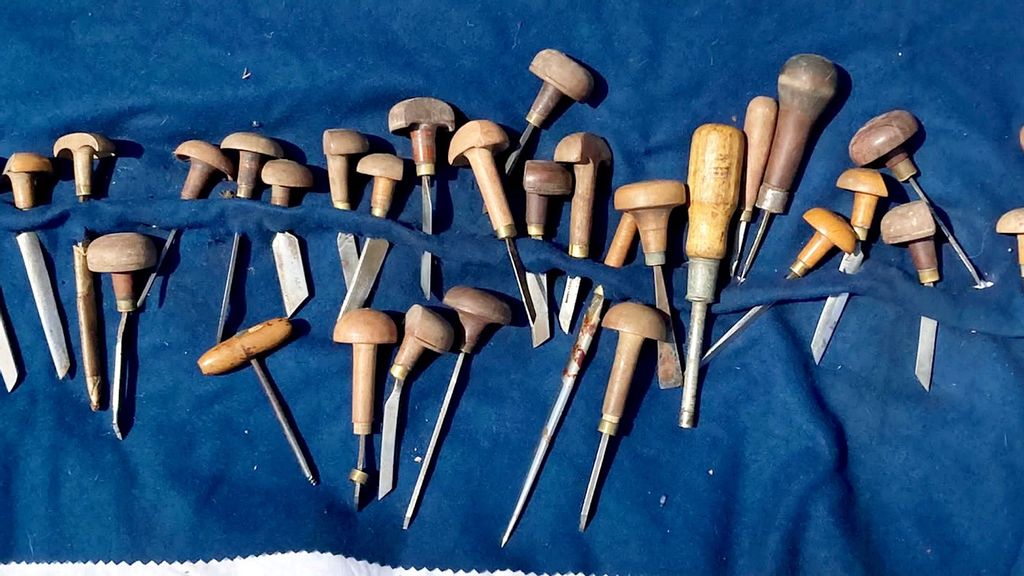 Thousands of handcrafted antique tools which a retired woodwork teacher spent decades collecting but never used are worth more than $35,000. (Steve Chatterley, SWNS/Zenger)

Thousands of handcrafted antique tools which a retired woodworking teacher spent decades collecting but never used are now worth more than $35,000.

Some of Mr. Turnage’s 30 tools, which were made by famed hand tool makers T. Norris & Son, are worth more than $1,100 each and could fetch far more.

Another prized item is a G. Entwistle gunmetal chariot plane worth between $600-$800, which Mr. Turnage kept wrapped in paper inside a Tesco carrier bag.

Mr. Turnage also kept a rusting vintage Wolseley Motors 14/60 car in his garage that he used to drive in the 1950s.

Car parts for a complete Morris Minor were also discovered in the attic of Mr. Turnage’s home in Crockenhill, Kent, in southern England, in the United Kingdom.

Mr. Turnage and his wife of 30 years Nympha, 79, are selling his collection in order to downsize due to his restricted mobility.

Family friend Kay Orga, from Burton-on-Trent, Staffordshire, in the UK, said Roy caught the collecting bug from his family.

She said: “Roy’s father and brother had a love of collecting antiques.

“Roy followed suit and particularly liked to amass tools. He was always good at making things and working with his hands.

“He’s something of an artisan.

“He was a woodwork teacher at Addey and Stanhope School in New Cross, London, for 37 years before taking retirement at the age of 60 in 1993.”

Over the next three decades, Mr. Turnage traveled around the United Kingdom to auctions where he would bid on historic tools which caught his eye.

Kay, who helped Mr. Turnage’s family sort through his treasures, added: “He could really indulge his collecting passions, then.

“He used to go to specialist auctions around the country and liked to buy the crème-de-la crème of high-quality tools – makes like Norris, Preston, Howkins, Stanley and Marples.

“He admired the craftsmanship and quality of handmade tools and also used them.

“Some are antique and rare dating back to the 1920s and 30s, or even earlier.

“There’s a huge number of planes but also an amazing collection of chisels, distinctive saws and wonderful tool boxes.

“We also uncovered a Holtzapffel Rose Engine Lathe, which is extremely valuable, and found parts to build a full Morris Minor in the attic.

“The Wolseley 14/60 was in the garage but it’s in need of restoration.

“Roy acquired it after completing his National Service in the 1950s. It was a former police vehicle and his sole means of transport for 20 years.

“I have been helping to clear the house and couldn’t believe how much there was.

“I’ve been on my hands and knees finding things tucked under beds and chests of drawers.

“The house was stuffed to the brim. There were metal filing cabinets full of tools.

“The Norris tools are particularly valuable and we have found more than 30 already.

“It’s difficult for Roy to part with his tools but he can’t use them anymore due to declining health.

“Also, there was so much in the house it became difficult for his devoted wife of 30 years, Nympha, to care for him.

“The house move will make life much easier for them both.”

The entire haul will go under the hammer with the tools set to fetch upwards of $35,000.

Chris Kirkham, associate director of Hansons London which is handling the auction, said: “It’s been one of the most astonishing house clearance projects I have ever been involved with.

“Roy is quite simply a phenomenal collector with an eye for quality.

“Discovering valuable planes in the Tesco bag was one of many incredible finds.

“He has amassed an astonishing amount of beautifully-made high-quality tools and other collectibles – important treasures for people who like to work with wood and understand the quality of these objects.

“Some tools may be worthy of a museum, such as the rare Norris plane. We’ve also found a distinctive Scottish-made plane.

“Other items set to go under the hammer include Japanese and oriental jewelry boxes and a Chippendale grandfather clock.”

The Roy Turnage tools collection and Wolseley car will be auctioned on July 30 in London.