California’s Trees Are Dying, And Might Not Be Coming Back 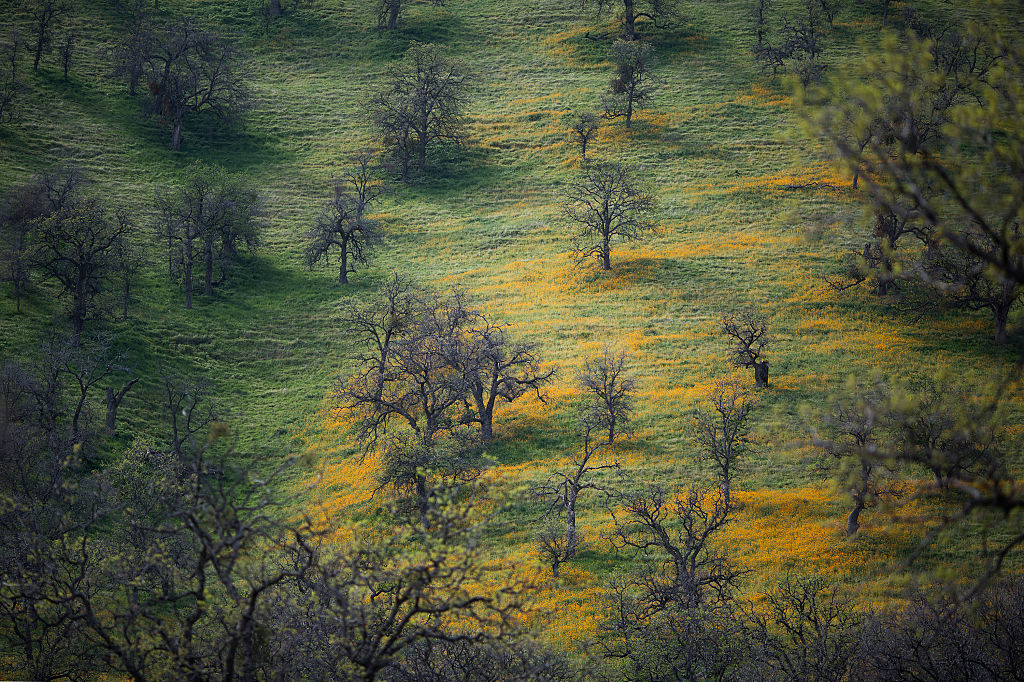 Wildflowers bloom in an oak forest that has been stressed by years of drought near California State Route 58 on March 4, 2016 west of Tehachapi, California. (Photo by David McNew/Getty Images)

According to new research published in AGU Advances, scientists have quantified California’s loss of tree cover and how it evolved, showing in unprecedented detail the loss of trees over the span of 37 years.

The co-authors used LANDSAT satellite data to document how California’s tree-cover changed in California from 1985-2021, being shrunk by wildfires, logging, and droughts.

In an email to Zenger News, study co-author Jonathan Wang wrote that California has lost 6.7 percent of its tree-over over that time, while most of the loss occurred due to “mega-fires” since 2010.

This was despite brief growth in the 1990s, he wrote, due to increased rainfall and reduce tree-cutting. Much of the loss, he added, occurs during the hot and dry summer months. Also, he predicted that “climate warming” may make forests more vulnerable.

“The forests are not keeping up with these large fires,” said study co-author James Randerson of the University of California-Irvine, according to a news release. Referring to the loss of trees, he added: “These are big changes in less than four decades.”

One of the starkest declines in forest cover was observed in Southern California, where 14 percent of the tree population in local mountains vanished, potentially permanently.

According to Wang, “The southern part of California is considerably warmer and drier than the northern mountains or the Sierra Nevada, and the trees that exist there are already close to the limit of their habitability.”

Wang wrote that rapidly increasing temperatures and prolonged droughts are “preventing forests from recovering from disturbance by hampering, for example, the ability of seeds to germinate post-fire.”

For Wang, this means the potential for a “biome shift,” in which forest cover “may be replaced by chaparral shrublands in the future.”

A press release quoted Wang, a post-doctoral researcher who led the study, saying: “The ability of forests to recover from fire appears to be dwindling in the south,” who added,

“At the same time, the state’s coverage of shrubs and grasses is rising, which could foreshadow more permanent ecosystem shifts.”

As for next steps for research, Wang wrote that he and colleagues were surprised by the lack of recovery in the forests of Southern California, which for him brings into question the Golden State’s ability to sequester carbon and meet net-zero emissions targets.

“California is banking on its forests to meet its climate action goals, and we hope to build out a comprehensive map of above-ground biomass to better understand the vulnerability and distribution of the state’s forest carbon stocks,” wrote Wang.

Finally, Wang wrote: “We also want to use these datasets to understand better how forest management and prescribed fire are impacting the severity of fires throughout the state, as a history of fire suppression has led to a dangerous build-up of fuels in California’s forests that are leading to even more catastrophic wildfires.”

The northern part of the state has shown plenty of recovery after fires, Wang affirmed, attributing it to its cooler temperatures and higher rainfall patterns, even though mega-fires of 2018, 2020, and 2021 devastated some areas.

“We might be entering a new age of intense fire and vulnerable forests.”