Archaeologists believe the 19-centimeter (7-inch) clay figure had been left in a natural niche in a rock formation as an offering. 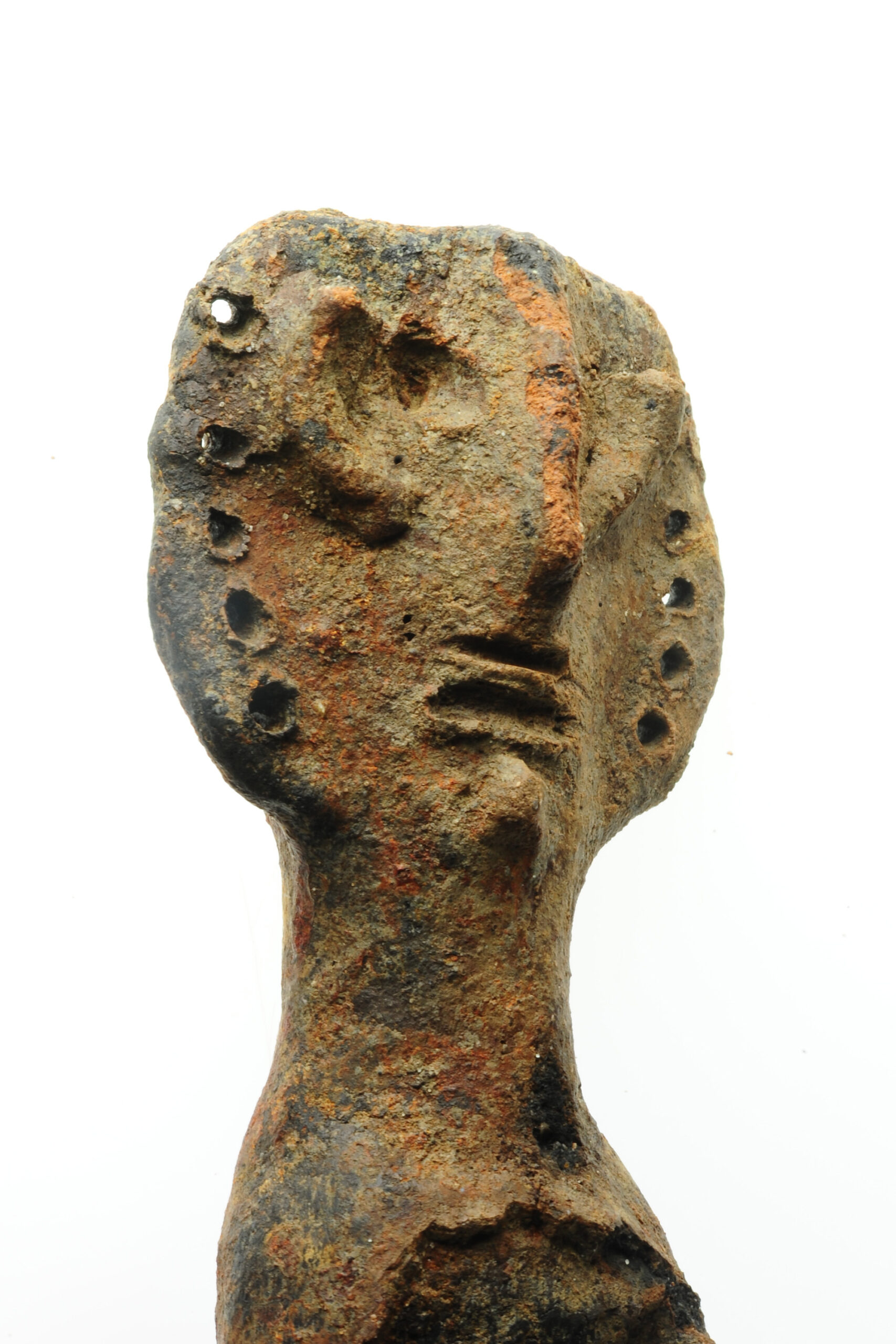 The head of the 3,000-year-old clay figurine that was discovered at an excavation site in the Schweinfurt region, on the edge of the Unkenbach plain that is now Monchstockheim in Germany. (BLfD/Zenger)

An astonishingly well-preserved 3,000-year-old statue of a magical water goddess has been unearthed by amazed archaeologists in Germany.

The clay figurine was found in a stream where a prehistoric riverside colony had settled between the 8th and 6th centuries BC.

Archaeologists believe the 19-centimeter (7-inch) clay figure had been left in a natural niche in a rock formation as an offering.

Its creators – from the Hallstatt culture in Schweinfurt district, Bavaria – could have worshiped it as a goddess, they say.

Experts believe that it could have been thought to have magical powers.

The remarkable find – made earlier this month (July) – is said to give new insight into pre-Christian worship.

The clay artifact is now being cleaned and studied at the Bavarian State Office for the Preservation of Monuments.

Archaeologists believe the figure used to be 10 centimeters (4 inches) taller.

Although there are no obvious visual clues as to its gender, the figure is believed to represent a woman.

In a statement obtained by Zenger News, the Bavarian State Office for the Preservation of Monuments said: “A team of archaeologists discovered a clay sculpture several thousand years old during excavations in Bavaria. There are no comparable finds so far.

“It is possible that people worshiped the small statuette as a water deity almost 3,000 years ago.

“At least the place where it was found speaks for its function as a cult object with a strong connection to water.

“Archaeologists discovered the ceramic figure in a prehistoric gully that the settlers of a nearby Hallstatt period settlement between the 8th and 6th centuries BC in what is now Moenchstockheim in Schweinfurt district may have used to draw water.”

It added: “It is currently being examined at the Bavarian State Office for the Preservation of Monuments, where it was also gently cleaned and dried using airbrush water technology.

“The finely modeled face of the sculpture is striking: the eye sockets, nose, lips and chin are clearly visible.”

The statement went on to quote General Curator Prof. Mathias Pfeil – head of the Bavarian State Office for the Preservation of Monuments – who said of the location where the figurine was found: “It is conceivable that people at that time regarded this special scenic location as a sacred place and the small statuette served them as a ritual offering or even ascribed magical powers to it.”

The statement continued: “The scheduled excavations took place in advance of construction work for the Moenchstockheim bypass on state road 2275.

“At the site, the team of archaeologists was not only able to recover the small clay figure, but also numerous pieces of broken glass, pottery tools made of bone and a well-preserved, also very unusual clay stamp.

“The fact that the ceramic finds were not rounded off by the water suggests that they were not washed up to where they were found, but were deliberately placed in the former ditch. In addition, lime deposits testify to a former spring in the immediate vicinity.

“The vessel fragments found can be clearly assigned to the Hallstatt period. They date to the 8th to 6th centuries BC. So far, however, there are no comparable finds for the statuette.”

The statement then quoted Dr. Stefanie Berg – archaeological monument conservator at the Bavarian State Office for Monument Preservation – who said: “Figures of this type made of clay are known, for example, from the western Black Sea region.

“They date to the 5th millennium BC. However, the other finds point to a much younger dating of the statuette. All of this leaves a lot of room for future interpretation.”

The statement continued: “Today the sculpture is 19 centimeters [7.4 inches] high, in its original, complete state it was probably about ten centimeters [4 inches] longer.

“Since the legs are only partially present and the front surface of the upper body is missing, the body shape does not provide any information about the gender.

“The sides of the head, riddled with holes, could represent a hood decorated with metal rings. Such a headdress is attributed to women.

“The pattern of the clay stamp from the same site is also extremely unusual. Since its printing surface is curved inwards, experts assume that it was used to decorate organic materials – such as bread dough.

“Corresponding experiments, which the scientists at the Bavarian State Office for Monument Preservation have carried out with a replica, also speak in favor of this.”