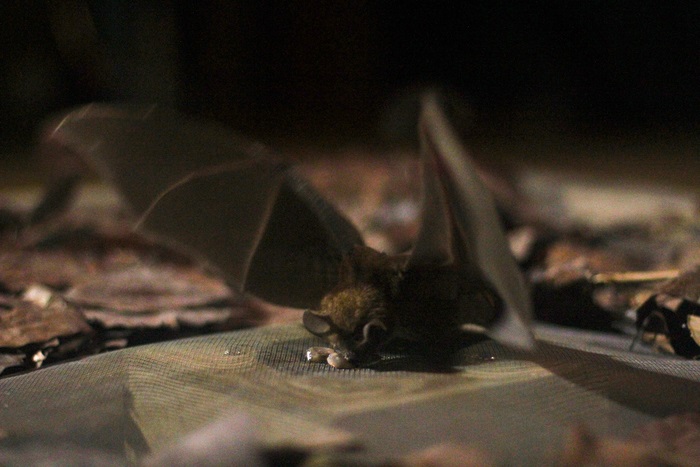 Researchers used speakers to play ringtones to the bats and place a baitfish on top of the speaker. When hearing the rewarded ringtones, the trained bats consistently flew to the speaker to collect their delicious reward. (Andrew Quitmeyer/Zenger)

Long-term memory allows not only people to acquire skills that rarely have to be re-learned, such as riding a bicycle, but certain bats may also have that capacity.

According to a study published in Current Biology, scientists at the Smithsonian Tropical Research Institute (STRI), located in Panama, have found that tropical frog-eating bats (Trachops cirrhosus) consistently responded to ringtones that rewarded them with tasty treats.

Biologist M. May Dixon of the University of Texas said of the subject of the study: “Frog-eating bats are an excellent emerging model organism for studying cognitive and sensory ecology.”

Dixon, who recently completed a doctorate, said that for the frogs, “learning plays a big part in their lives.”

Also known as fringe-lipped bats, their range extends from southern Mexico and Central America, to Bolivia and Brazil. Of medium size, they eat not only frogs, but also lizards, insects, fruit, and even other bats.

“I’m interested in memory capacity in animals and what causes long-term or short-term memories, what ecological conditions select for different memory lengths, what is important to remember and to forget,” she said.

“But studying long-term memory is very difficult, because it takes a long time by definition. And testing memory in captive animals, even if it’s more convenient, isn’t necessarily representative of what animals can remember in the wild.”

The brainy bats in the study have not only the ability to learn, but also retain information they use while hunting their favorite prey, and thereby don’t have to relearn which chirping frog calls indicate which frog is poisonous, too big, or just right for eating.

In the study, the research team trained 49 wild bats in Panama’s Soberanía National Park to respond to cellphone ringtones played through loudspeakers.
Two of the ringtones rewarded them with fish on the speaker every time, while three other ringtones offered no rewards.

The crafty bats quickly learned to which speaker would offer a treat, and not respond to the others.

They were then given microchips and then released into the wild.

The researchers recaptured eight of the trained bats from one to four years later, having determined that the bats recognized and responded to the ringtone rewards years after the training.

As a control, the study included 17 untrained frog-eating bats: they just twitched their ears, but did not fly to the ringtones.

The ringtones used in the study were clearly human-generated so that the bats would not hear them casually in nature, but sufficiently resembled frog calls enough to entice the winged mammals.

When the researchers played extinguished tones (the tones not accompanied by rewards that the bats learned to ignore), they observed six of the eight trained bats approach.

Dixon said, “It’s possible that they remember the extinguished sound, but enough time had gone by that they thought to check it out once more.”

Dixon added, “Or it’s possible that they couldn’t remember the exact difference between the ringtones, and that extinguished sound was close enough to the rewarded one that they decided to check that out too. Sort of like a generalization of memory.”

For the researchers, the study raises questions about how bats and other animals remember, and about the metabolic costs of remembering.

The Smithsonian Tropical Research Institute in Panama and its BatLab are part of the Smithsonian Institution, which is based in Washington D.C.