The study in Nature Astronomy also sheds light on how black holes are created from the cores of dying stars. 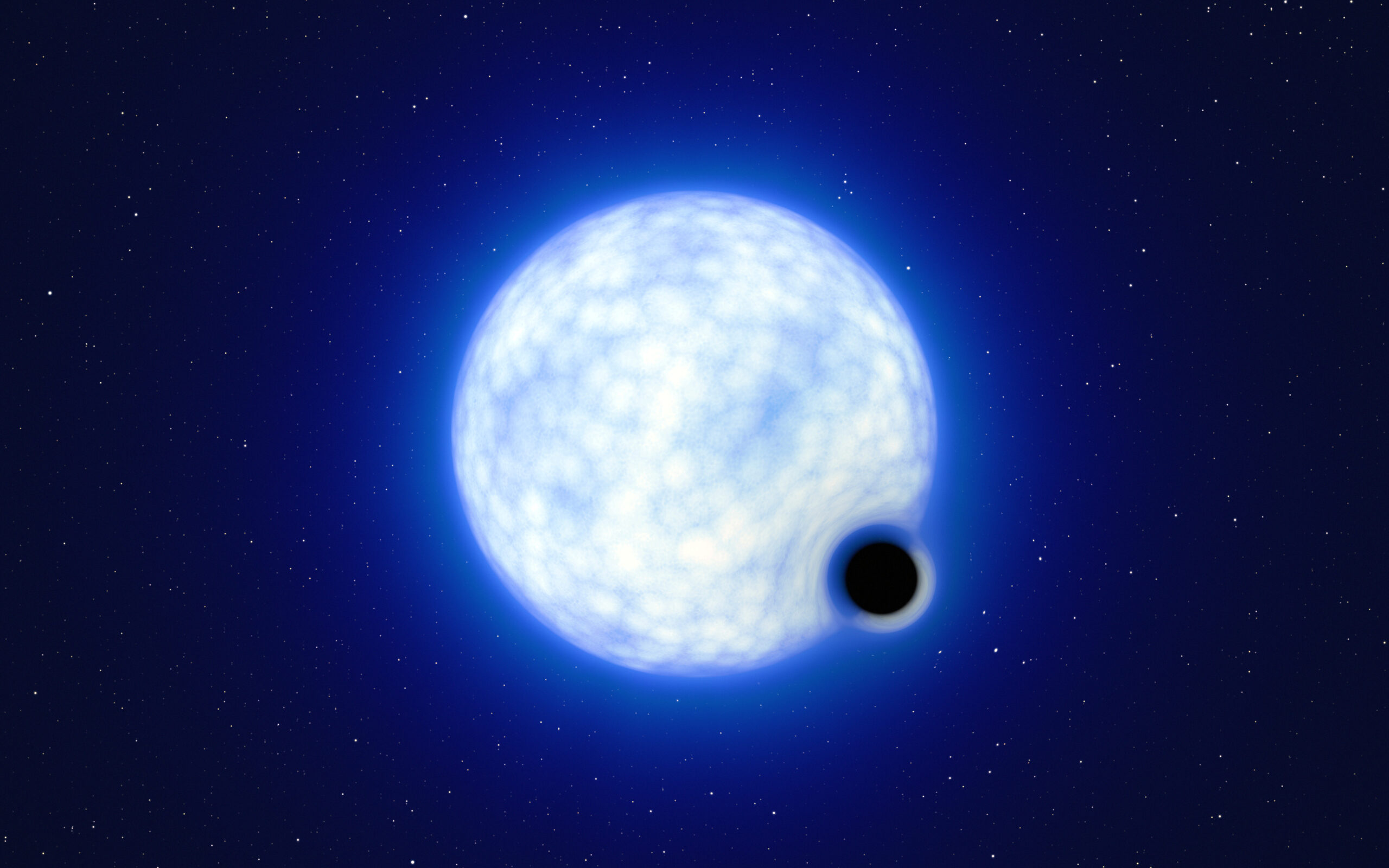 A dormant black hole at least nine times the mass of the our Sun has been detected just 160,000 light years from Earth, the first time outside our galaxy.

The sleeping giant is not currently devouring gas or other matter.

It lies in the Large Magellanic Cloud – a satellite galaxy that neighbors the Milky Way and orbits a hot, blue star that is almost three times as big.

The discovery has been likened to finding a ‘needle in a haystack’.

Co-author Dr. Pablo Marchant of KU Leuven in Belgium, said: “It’s incredible we hardly know of any dormant black holes given how common astronomers believe them to be.”

They are particularly hard to spot since they do not interact with their surroundings.

Co-author Dr. Julia Bodensteiner, of the European Southern Observatory (ESO) in Germany, said: “For more than two years now we’ve been looking for such black-hole-binary systems.

“I was very excited when I heard about VFTS 243, which in my opinion is the most convincing candidate reported to date.”

The star that gave rise to it vanished – without any sign of a powerful explosion.

Lead author Dr. Tomer Shenar, of Amsterdam University, in the Netherlands, said: “We identified a ‘needle in a haystack’.”

The international team – known as the ‘black hole police’ – searched nearly 1,000 massive stars in the spectacular Tarantula Nebula in the constellation of Dorado.

Identifying companions as black holes is extremely difficult as so many alternative possibilities exist.

Dr. Shenar said: “As a researcher who has debunked potential black holes in recent years, I was extremely skeptical regarding this discovery.

“For the first time, our team got together to report on a black hole discovery – instead of rejecting one.”

He said: “When Tomer asked me to double-check his findings, I had my doubts. But I could not find a plausible explanation for the data that did not involve a black hole.”

The study in Nature Astronomy also sheds light on how black holes are created from the cores of dying stars.

It was uncertain whether or not this is accompanied by a powerful supernova explosion.

Dr. Shenar explained: “The star that formed the black hole in VFTS 243 appears to have collapsed entirely – with no sign of a previous explosion.

“Evidence for this ‘direct-collapse’ scenario has been emerging recently – but our study arguably provides one of the most direct indications. This has enormous implications for the origin of black-hole mergers in the cosmos.”

Stellar-mass black holes form when massive stars reach the end of their lives and collapse under their own gravity.

In a binary system – two stars revolving around each other – this process leaves behind a black hole in orbit with a luminous companion.

Black holes are ‘dormant’ if they do not emit high levels of X-ray radiation – which is how they are typically detected.

Identification of VFTS 243 was made thanks to six years of data obtained with ESO’s Very Large Telescope (VLT).

The FLAMES (Fibre Large Array Multi Element Spectrograph) scanner allows more than a hundred objects to be observed at once – a significant saving of time.

Despite the nickname ‘black hole police,’ they actively encourage scrutiny. Thousands of stellar-mass black holes are believed to exist in the Milky Way and the Magellanic Clouds.

They are much smaller than the supermassive black hole 27,000 light years from Earth that is powering the Milky Way.

Dr. El-Badry said: “Of course I expect others in the field to pore over our analysis carefully, and to try to cook up alternative models. It’s a very exciting project to be involved in.”

«Previous Post
Moonmaker: Scientists To Use Moondust And 3D Printers To Build Lunar Settlements»Next Post
Lunar City With Artificial Gravity Created In Bid To Enable Babies To Be Born On Moon