The Spanish authorities later determined that the drawing was likely the 1966 work ‘Trois personnages’ by Pablo Picasso. 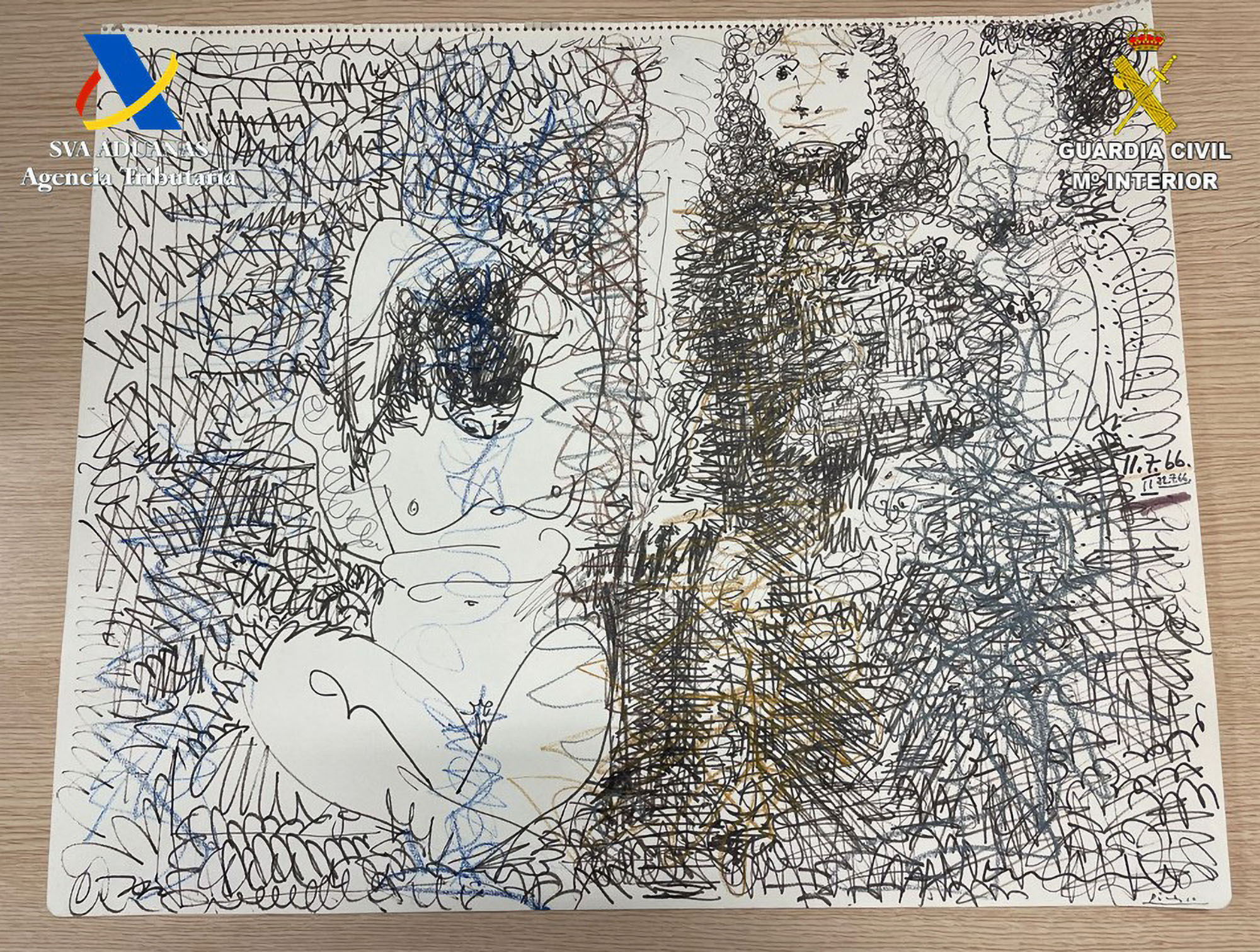 Customs officials have seized an original Picasso drawing worth nearly $465,000 after a traveler tried to smuggle it into Spain as a fake.

Following a tip-off from Swiss Customs, officials at Ibiza Airport stopped the traveler after he landed from Zurich on July 5.

When asked if he had anything to declare, he replied no, but they searched his belongings and found an artwork signed by Picasso in a paper tube.

But they noticed the invoice was dated July 7 and searched the rest of his luggage, where they found another invoice from a gallery in Zurich.

That invoice was for 450,000 Swiss francs ($464,000), which the Spanish authorities later determined was the artwork’s likely market price.

Police booked the traveler for smuggling, as the sketch’s value exceeded 150,000 euros ($153,500) and needed a customs declaration.

The Spanish authorities later determined that the drawing was likely the 1966 work ‘Trois personnages’ by Spanish artist Pablo Picasso (1881-1973).

In a statement obtained by Zenger News on July 18, the Spanish Tax Agency said: “Customs officials from the Tax Agency and agents from the Guardia Civil, as part of a joint operation, have seized a drawing attributed to Pablo Picasso for smuggling on July 5 at Ibiza airport.

“The work, ‘Trois personnages’ (1966), was found in the luggage of a traveler from Switzerland who was trying to bring the work into Spain without declaring it.

“Investigators discovered in his luggage an invoice from a Swiss gallery in Zurich for 450,000 Swiss francs (an equivalent amount in euros).

“The Cultural Heritage and Fine Arts authorities have considered, on a preliminary basis and in the absence of more exhaustive reports, that the work is original and that the price invoiced by the gallery is in line with the market price.

“The action stems from information sent by Swiss Customs to the Permanent Operational Coordination Center of the Customs Department of the Tax Agency about a traveler who, with origin in Switzerland, was on a Zurich-Ibiza commercial flight carrying a work of art in circumstances that the Swiss authorities considered suspicious.

“Following this information, an operation was set up, made up of Customs officials from the Agencia Tributaria and Guardia Civil agents, to seize the work in the event that the traveler tried to introduce it without declaring it, thus evading the control of the Spanish customs authorities.

“On arrival at Ibiza airport, the traveler denied to investigators’ questions that he had anything to declare and crossed the corresponding green channel.

“His luggage was immediately checked and a signed work of art by Picasso was found inside.

“At that point, the traveler went on to claim that it was a copy and showed a handwritten invoice for 1,500 Swiss francs [$1,550].

“However, during an in-depth search of his luggage, a second invoice was found, this time from an art gallery in Zurich, for a value of 450,000 Swiss francs [$464,000], bearing the title of the work ‘Trois personnages’, dated 1966, which corresponded to the work of art which was the subject of the customs checks.

“In this situation, and in view of the theft of the work of art from the customs authorities, the print was seized for an alleged smuggling offense, as a work of art whose value clearly exceeded the established legal limits had been introduced without declaration from Switzerland (a non-customs territory of the European Union).

“As the goods in question exceeded 150,000 euros [$153,500] and were brought in without a customs declaration despite the authorities’ express questions as to whether the passenger had anything to declare, an alleged smuggling offense was committed, in accordance with the provisions of Organic Law 12/1995 on the Repression of Smuggling.

“The lawful introduction of the work into Spain would have implied having to pay customs duties and VAT on importation, in addition to the administrative declaration obligations to which the goods were subject.

“After the intervention of the work, steps were taken with the Directorate General of Cultural Heritage and Fine Arts of the Ministry of Culture, which contacted an expert in contemporary art, the director of the Museu d’Art Contemporani d’Eivissa, who gave a preliminary positive report on the originality of the work and its market value, which would correspond to the price invoiced by the Swiss gallery.

“For final accreditation, more exhaustive reports will be required, which will subsequently have to be carried out by experts in Picasso’s work using advanced techniques.

“The work of art is at the disposal of the Juzgado de Instrucción 4 of Ibiza, which is in charge of the investigation of the facts.”