“The SINKEX (sinking exercise) was a professionally enriching experience for the crew of KD Lekir.”
By Simona Kitanovska July 20, 2022
Facebook
Twitter
Linkedin
Email 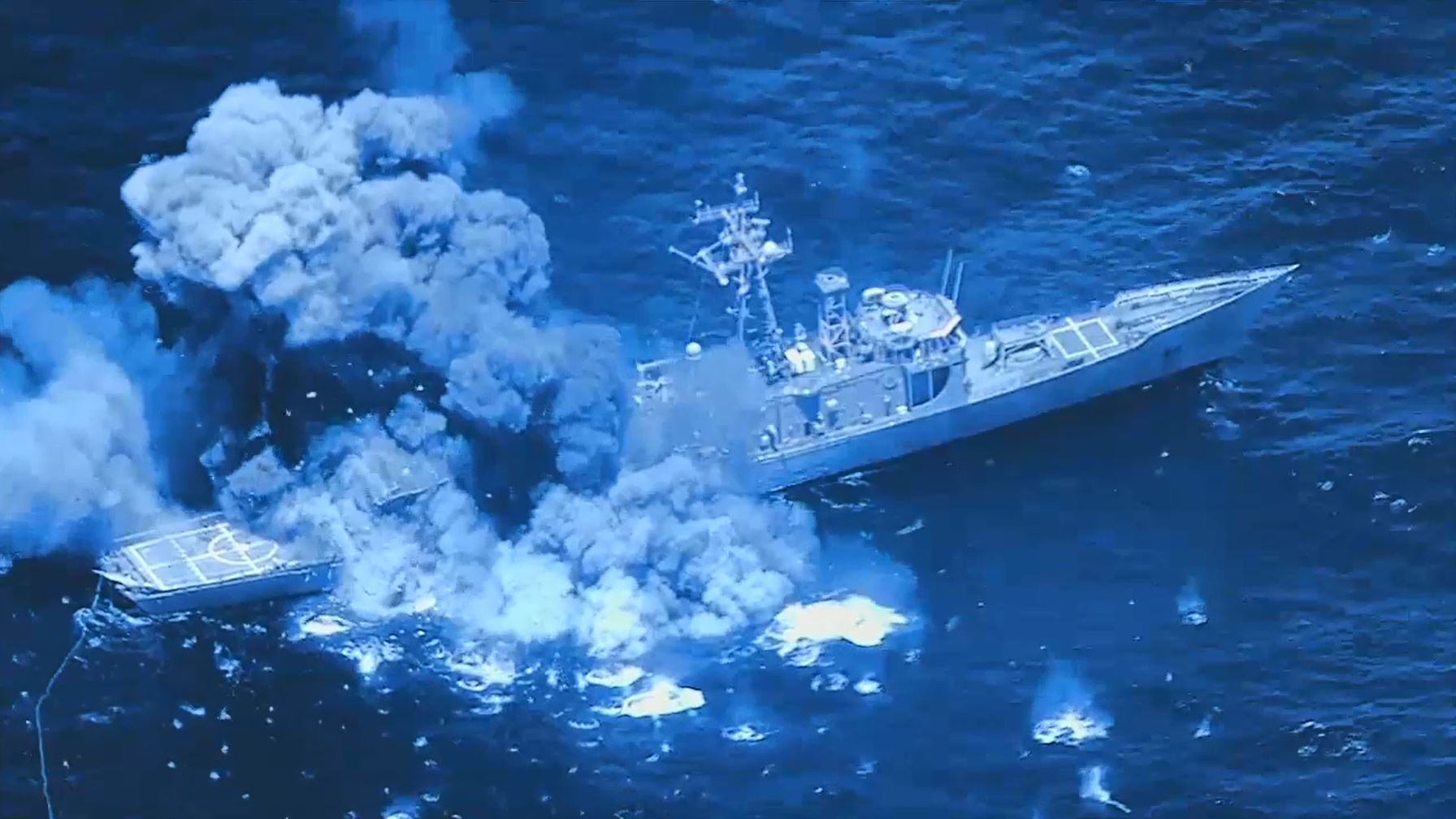 A U.S. warship has been sunk by missile fire in the Pacific. (Dean Murray, SWNS/Zenger)

A U.S. warship has been sunk by missile fire in the Pacific.

However, the destruction of the guided missile frigate USS Rodney M. Davis wasn’t unexpected, having been selected for a multi-nation sinking exercise.

Units from Australia, Canada, Malaysia, and the U.S. participated to gain proficiency in tactics, targeting and live firing against a surface target at sea.

“The SINKEX (sinking exercise) was a professionally enriching experience for the crew of KD Lekir,” said Adm. Mohd Reza Mohd Sany, Chief of the Royal Malaysian Navy. “These events provide an excellent platform toward enhancing interoperability amongst the participating navies.”

“This exercise provided a great opportunity for the extremely talented sailors, soldiers, and aviators who comprise the RIMPAC 2022 team to hone their skills in a live-fire setting,” said Royal Canadian Navy Rear Adm. Christopher Robinson, deputy commander of the RIMPAC Combined Task Force. “There is nothing that really replaces the training value of opportunities such as this, which enable us to test our weapons and their associated combat systems with as much realism as possible. These live-fire exercises are vital for maintaining our proficiencies, building our interoperability, and increasing our readiness for future operations.”

Former Navy vessels used in SINKEXs were prepared in strict compliance with regulations prescribed and enforced by the Environmental Protection Agency under a general permit the Navy holds pursuant to the Marine Protection, Research and Sanctuaries Act.

Each SINKEX is required to sink the hulk in at least 1,000 fathoms (6,000 feet) of water and at least 50 nautical miles from land. Surveys are conducted to ensure that humans and marine mammals are not in an area where they could be harmed during the event.

“The coordinated firing of anti-ship munitions is a complex activity. This SINKEX demonstrates the interchangeability of the capable and adaptive RIMPAC partners,” said Royal Australian Navy Commodore Paul O’Grady, commander of the RIMPAC maritime forces component. “In doing so, significant measures were taken to protect the maritime training environment.”

Prior to the vessel being transported for participation in a SINKEX, each vessel is put through a rigorous cleaning process, including the removal of all polychlorinated biphenyls (PCBs), transformers and large capacitors, all small capacitors to the greatest extent practical, trash, floatable materials, mercury or fluorocarbon-containing materials and readily detachable solid PCB items. Petroleum is also cleaned from tanks, piping and reservoirs.

Ex-USS Rodney M. Davis was the first ship to bear the name of the United States Marine Corps sergeant who was posthumously awarded the Medal of Honor after being mortally wounded in the Vietnam War.

Twenty-six nations, 38 ships, four submarines, more than 170 aircraft, more than 30 unmanned systems and 25,000 personnel are participating in RIMPAC, from 29 June to 4 August, in and around the Hawaiian Islands and Southern California.

The world’s largest international maritime exercise, RIMPAC provides a unique training opportunity while fostering and sustaining cooperative relationships among participants critical to ensuring the safety of sea lanes and security on the world’s oceans. RIMPAC 2022 is the 28th exercise in the series that began in 1971.