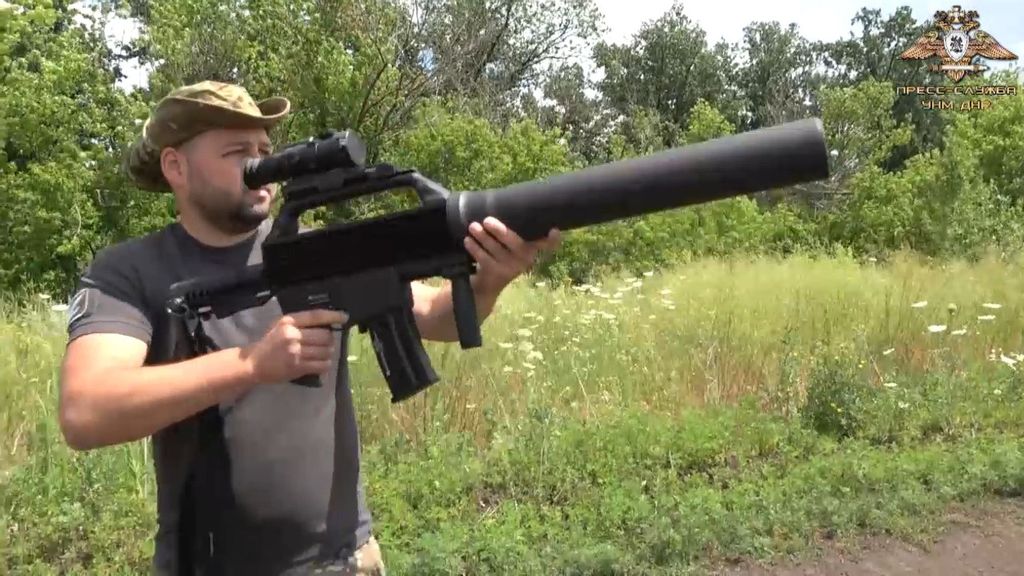 The DPR army testing anti-drone guns from the Laboratory of Counteracting Industrial Espionage on one of the polygons of the People's Militia of the DPR in Ukraine. (@nm_dnr/Zenger)

An anti-drone gun was allegedly being shown off by the pro-Russian, so-called Donetsk People’s Republic and used to shoot a drone out of the sky, as these images purport to show.

The images were obtained from the so-called Donetsk People’s Republic (DPR) on Friday, July 15, along with a statement in which they claimed: “At one of the ranges of the people’s militia, they tested anti-drone guns from the Laboratory of Counteracting Industrial Espionage.

“In order to strengthen the counteraction of enemy UAVs [Unmanned Aerial Vehicles] in the DPR, a number of models of electromagnetic guns were tested, as well as jammers from the Laboratory of Counteracting Industrial Espionage. All models of Drones of various types and manufacturers were successfully suppressed during the tests.”

One of the DPR soldiers claimed: “We wanted to demonstrate weapons that operate on unmanned aerial vehicles, on drones. The weapon has a battery in the magazine, and in order to work at night, it has a thermal imager, because at night the lights are removed from the drones so that they cannot be seen. With a thermal imager you can see it very well and work on it.

“We conduct tests in order to have feedback from the people who produce these weapons. In order for us to increase the efficiency and survivability of our units, this will save lives, we want to have not only a large number of drones, but we want to have weapons that can deactivate drones, because the drone is now the biggest trouble of this war.

“We hope that thanks to this thing, our guys will be completely covered by the drone suppression system. Tests will be conducted on different types of drones.

“Drones are all different and there are different systems now, we will see how effective it is. We brought manufacturers right here to see what really works. I point the weapon at the drone, the drone was suppressed, it fell, the signal from the drone operator disappeared, now we will look for him.”

We have not been able to independently verify the claims or the footage. The make and model of the weapon used in the footage are currently unclear.