The shocking footage shows the officer fully ablaze as he struggles to put out the fire while the driver attempts to flee. 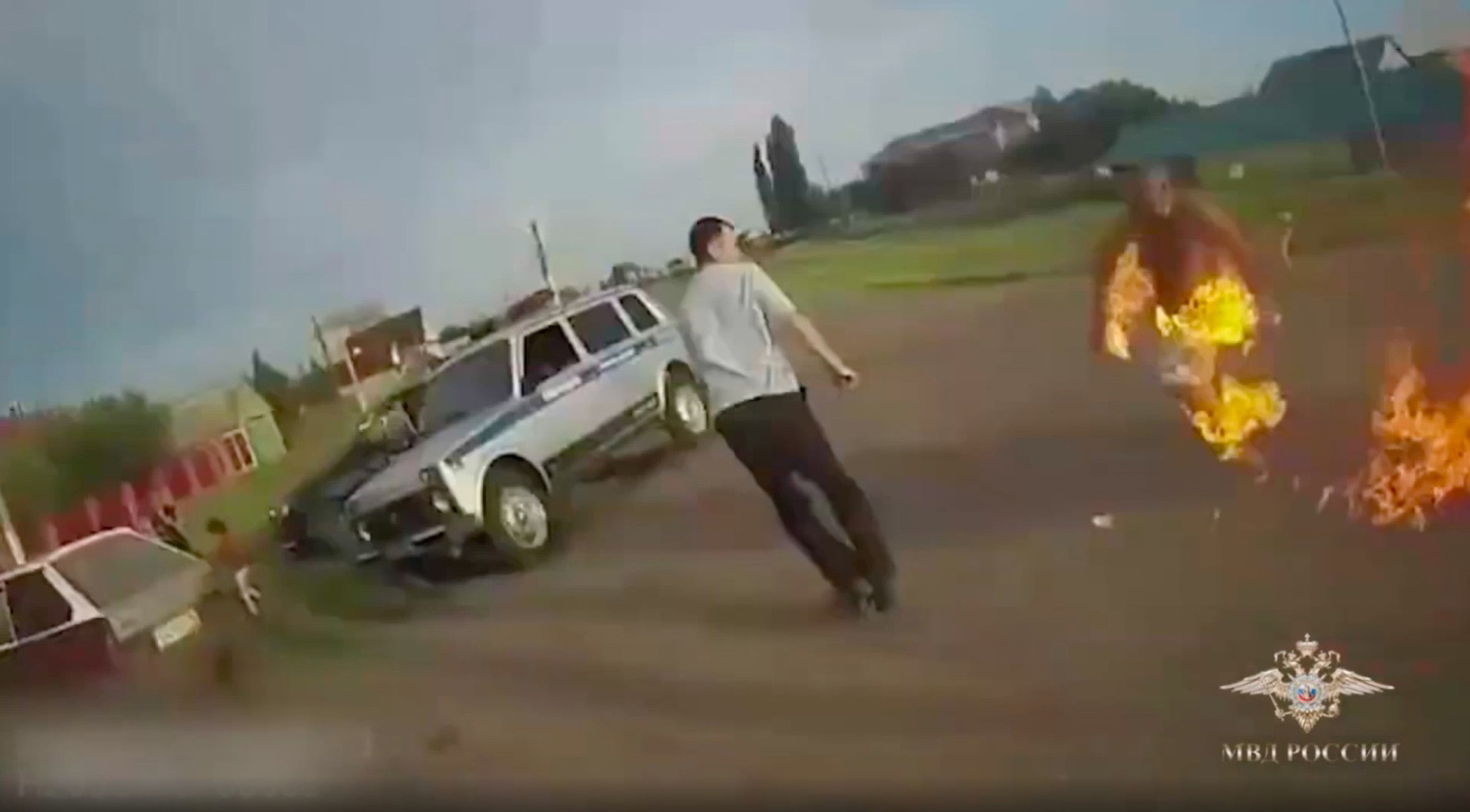 A man who was allegedly drunk doused a traffic police with gasoline and set him on fire in Kugarchinsky District in the Republic of Bashkortostan, Russia. (Ministry of Internal Affairs of Russia/Zenger)

A drunk driver who soaked a traffic cop in gasoline and set him on fire has been seized by police in Russia.

Shocking police bodycam footage of the drama emerged after what had begun as a routine traffic stop turned into a grim human inferno.

The footage begins with a traffic cop checking the documents of a bare-chested driver who was suspected of drunk driving.

But as officers were writing out a ticket, the 42-year-old driver opened the car trunk and pulled out a can of gas.

While the officers were drawing up the fine, the car owner took out a canister of gasoline from the boot and reportedly tried to pour it over his vehicle.

But he was stopped from doing so by the police officers, one of whom can be seen catching fire after being doused in the flammable liquid, with the suspect allegedly igniting it.

As he struggled with the 33-year-old officer, he apparently set off a lighter, igniting gas that had splashed over the policeman’s arms and torso.

The shocking footage shows the officer fully ablaze as he struggles to put out the fire while the driver attempts to flee.

It ends with the driver forced up against a wall, apparently under arrest.

The gruesome attack took place in the village of Yumaguzino, in the Kuyurgazinsky District, Republic of Bashkortostan, in south-western Russia.

“During the verification of documents, police officers noticed obvious signs of intoxication in the driver.

“The man was offered to be examined, but he refused. In addition, it turned out that he had previously been deprived of a driving license.”

The police statement went on: “The police made an attempt to prevent the potentially dangerous actions of the attacker.

“One of the inspectors was able to take the container, but the fuel spilled on his hands and clothes.

“The driver at that time set fire to gasoline with a lighter in his hand.

“As a result, the police lieutenant received serious burns. He was urgently hospitalized in a local hospital.

The suspect, who has not been named, has been detained and the investigation is ongoing.

There have been no further updates on the condition of the police officer, who was not named either.