“I would like to see a ban on assault weapons,” said Debi Hixon, whose husband was murdered. “It’s just that simple.” 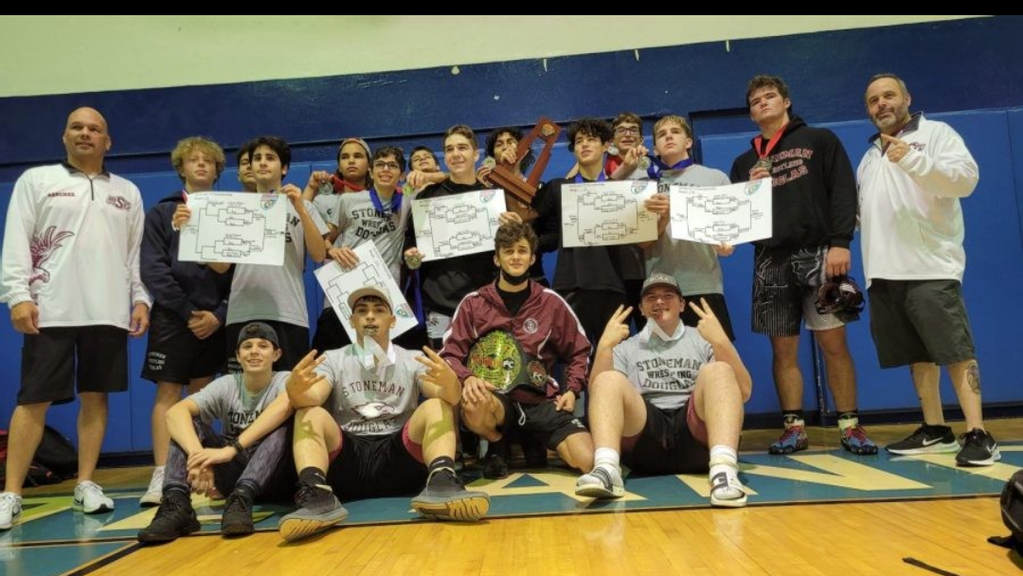 Gendason was among the mourners, following what was the deadliest high-school massacre in U.S. history. He had once served as head coach of the Eagles’ wrestling team.

“I was very close with Coach Aaron Feis, working on the same security team with him for two years. Chris Hixon was the athletic director and wrestling coach. The building I once used to walk in and mentor students is where the February 14 tragedy happened,” Gendason said.

“When I was doing security there, 95 percent of the time building 12 was my building. I always look back. If I was still there, I would have been the first one rushing to that building — without knowing the situation at that time — just like Coach Hixon and Coach Feis. From the stories I heard, some people thought it was fireworks at first. I used to think that if I was still doing security at the school that it could have been me in that building as well.”

A former high-school state runner-up wrestler at perennial state power Owings Mills High in Baltimore County in Maryland, Gendason’s first head coaching position was with the Eagles, from 2011 to 2013. That’s before he took a post at rival Monarch High in Coconut Creek, Florida.

Gendason maintained a strong bond and a rivalry with Stoneman Douglas during that time.

“We beat several schools for the first time in school history in dual meets and tournaments during my five years coaching at Monarch. Ironically, one of those schools was Douglas. The tragedy hit me harder because we had wrestled Douglas a week earlier. Before the match, I was laughing and hanging out with Coach Hixon and Coach Feis and having a good time,” said Gendason.

“At Coach Feis’ viewing, I was talking to my former administrator who mentored me. She said, ‘I want you to come back.’ Without hesitation, I said, ‘If you can make it happen, I will come back.’ I returned as wrestling coach after Coach Hixon was killed in the tragedy. Ironically, Chris used to tell me to come back to Douglas, and I would laugh.”

Chris Hixon and his wife, Debi, a Broward County-wide school-board member, “had conversations about school safety long before the shooting happened at Douglas.

“I don’t think any civilian should have an assault-type or military type of weapon. If you want protection, a handgun would do that,” Debi Hixon said.

“Why do we need to have something that can kill lots of people in a short amount of time? I don’t think that’s what our forefathers envisioned. But people interpret the Constitution the way they want to,” she said.

Although Hixon applauds the recent gun-law legislation, she believes more can be done, even alluding to those who favor protecting the unborn.

Gendason has helped lift spirits since returning to Stoneman Douglas in the fall of 2018. Before the end of the 2022 season in March, the Eagles became district champions for the first time since 2011, placed third in the Broward County Championships. It also had a female state runner-up in sophomore Gaby Caro.

“We have a Coach Hixon Award each season, which supersedes the Most Valuable Wrestler. It is dedicated to the one we feel was not only an accomplished wrestler, but the most selfless and truly supported the team,” said Gendason.

“This year’s recipient was Lucca Azzarelli, a four-year wrestler who was ranked No. 1 in the district and had a good chance to go to states before suffering a medical injury.”

“Daniel has been the behind-the-scenes backbone to our program and was Coach Hixon’s assistant coach at the time of the tragedy. The team only had a few days to prepare from the time of the tragedy to the district championships, and he played a big role in keeping the team together and focused,” Gendason said.

“The crazy part is the team went from Coach Hixon’s funeral straight to the districts. As they walked into the gym, all the district teams lined up on both sides of the mat and gave them a standing ovation. The team beamed that day pulling off several upsets and took second in the district.

”Oh my God, my daughter is in there.”

Sanchez was en route to practice and a team photo on the day of the shooting, unaware that Cruz, already had exited his Uber outside the campus at 2:19 p.m. Cruz approached the school wearing a backpack filled with magazines and carrying a black duffel packed with his legally purchased AR-15 semi-automatic rifle.

“Normally, I come in early to help set up the mats, but we were supposed to take a team photo that day. So I texted Coach Hixon and I said: ‘I’ll be there a little early, so we can get that photo done,’ unaware that the tragedy was going on in real time. I didn’t hear back, so I said, ‘Let me send one more text.’ So I sent him another text, and he didn’t answer,” Sanchez said.

“Then I started seeing police officers blocking the roads, and I asked, what was going on. They said there was an active shooter at Stoneman Douglas, and I thought, ‘Oh my God, my daughter’s in there.’ [The officer] said, ‘Do you work at the school?’ I said, ‘I’m a volunteer coach.’ He said, ‘I still can’t let you in.'”

At that point, Sanchez received a chilling account from his daughter.

“She sent me a text and said, ‘Oh my God, he’s trying to open the door.’ I said, ‘Who?’ She said, ‘The active shooter,'” Sanchez said. “I said, ‘Go to the farthest corner of the classroom and throw some desks in front of you.’ I’m on my way.”

Gendason was still at Monarch when he had shirts made supporting Douglas’ wrestling team. The shirts read: Monarch Wrestling Supports #DOUGLASSTRONG.

Meanwhile, the (Maroon) Eagles’ season was in jeopardy.

“The athletic department considered shutting our program down, but I said you’re doing the wrong thing. You’re not telling me anything about a tragedy that I don’t know and haven’t seen,” Sanchez said. “Let me pull them in, talk to them and help them to process everything. These kids need to compete. They’re going to want to do it for their coach.”

“Everybody put their arms around us and made us comfortable. Steve Mocco, a two-time NCAA wrestling champion, opened the doors to their facility and let us get ready for districts because I didn’t want the kids training in their school environment. This was about Coach Hixon, and they went out there with a purpose,” Sanchez said.

“One of our most electrifying wins that really sparked our team was when our sophomore wrestler, Sara Ochoa, lateral dropped and pinned a kid from Monarch High in 16 seconds. We thought we had a strong chance to finish in the top four as a team, but we ended up taking second place, and I didn’t see that coming.”

The impact never goes away

But the trauma of gun violence resurfaced twice within a month of the season’s end in March.

First came the shooting in Buffalo, New York, on May 14, when Payton S. Gendron, 18, used a Bushmaster XM-15 semi-automatic rifle to slaughter 10 black people and wounded three others.

Then 10 days later, on May 24, Salvador Ramos, 18, entered Robb Elementary School in Uvalde, Texas, and used an AR-15 style rifle to murder 19 students, two teachers and wounded 17 others.

Less than two months after the Uvalde massacre, a shooter in Highland Park, Illinois, killed seven people and wounded more than 40 others on July 4, during an Independence Day parade.

“Every time something happens, you see they’re at work the next day, and they’re devastated,” said Gendason, a father of a 21-year-old daughter and 24-year-old son. “Every time something happens, I see all the anger and sadness among the students and my co-workers. But they are so strong and tight-knit, they immediately comfort one another. It’s almost like the impact never goes away, and they’re reliving it all over again.”

The Uvalde school massacre ranks as America’s third-deadliest following those at Virginia Tech in 2007 and at Sandy Hook Elementary School in 2012. At Virginia Tech, two semi-automatic pistols were used to massacre 32 people and wound 17 others. At the Sandy Hook shooting in Cennecticut, 20 of the 26 who died as a result of an AR-15 were 6- and 7-year-old children.

While visiting friends in Colorado two years ago, Gendason “paid my respects” to the victims of the Columbine High massacre on April 20, 1999, when 12 students and a teacher were shot dead, and 21 additional people were injured. The perpetrators, 12th-grade students Eric Harris and Dylan Klebold, committed suicide.

“By complete fluke, I ran into the Columbine wrestling coach. We formed a bond ever since, always sending messages and updates on each other every season. Douglas is located in a top-notch area and a very wealthy community. If it can happen there, it can happen anywhere,” said Gendason of Rebels’ wrestling coach Luke Baron.

“Will things ever change? I don’t know. It’s almost become the norm, which is sad to say. I do have several friends that are running for political positions. I know they will fight for our school safety. Two of them are in Maryland and both were wrestlers. I was on the same team with one and coached the other.”

Among the Stoneman Douglass survivors are 22-year gun-control advocate David Hogg and 21-year-old Cameron Kasky, the latter having just left drama class when the shooting began.

“Assault-style and semi-automatic weapons should stay with law enforcement and the military,” said Sanchez, a former airborne paratrooper. “I’m all for the Second Amendment, which was drafted during a period of time when you needed weapons in the house to protect yourself or get your food, but how many people need an AK-47 to do that?”

“We have to keep fighting for these children every day. They deserve to come to school feeling safe,” Gendason said. “At the end of the day, this is about our students, their families, their schools and their communities.”