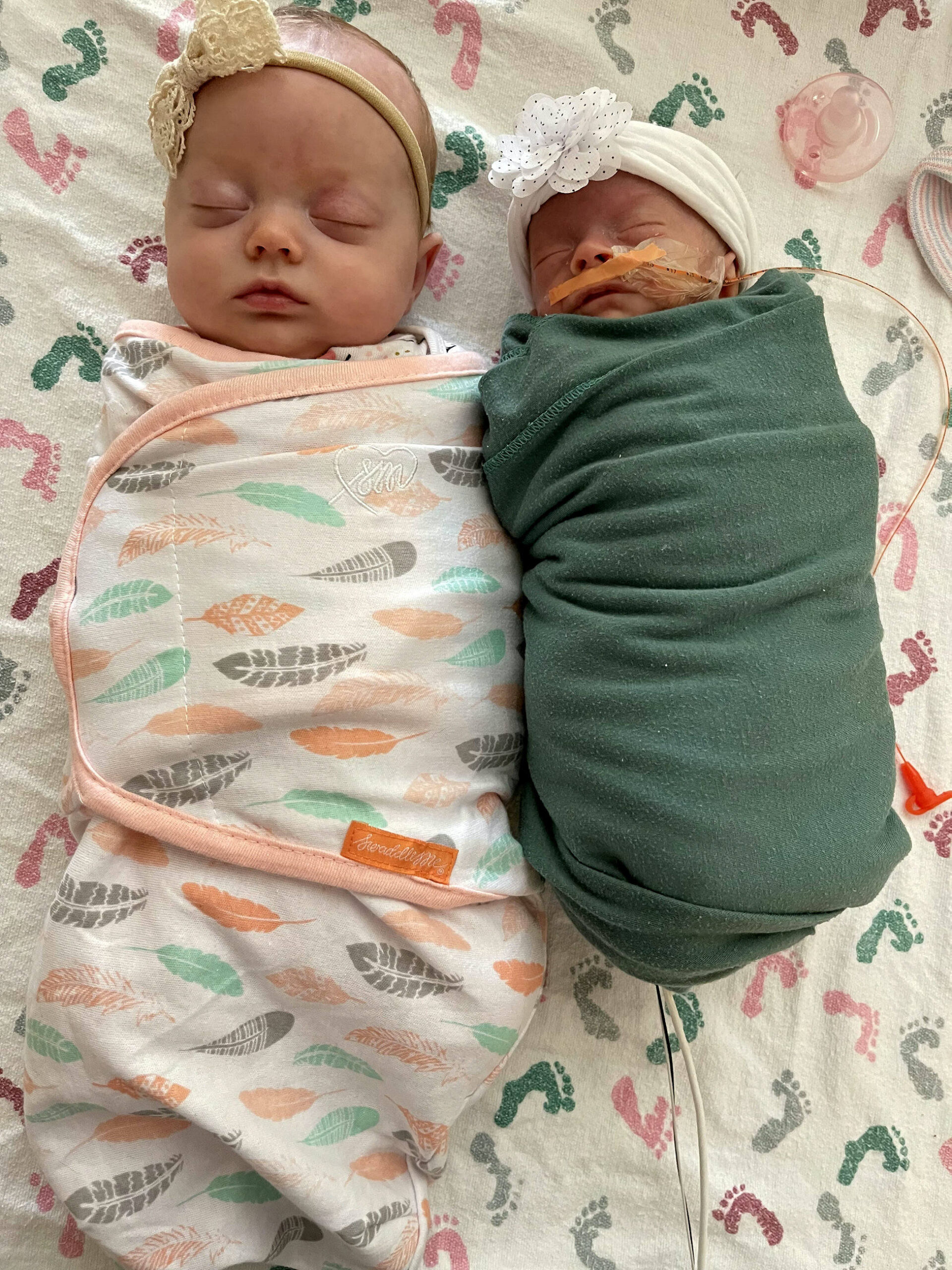 Meet the twin born almost three times smaller than her sister who defied the odds after doctors were convinced she would die in the womb.

Tiny Reagan, now six months old, was born 11 weeks early and weighed just 1 pound, and was dwarfed by her twin Mila, who was 2 pounds and 13 ounces.

Audrieanna Lambert, 32, said it was a miracle Reagan was alive at all after doctors’ stark warnings that she wouldn’t survive the pregnancy.

Doctors at West Penn Hospital, in the city of Pittsburgh, in the US state of Pennsylvania, became concerned at 20 weeks when they spotted Reagan had stopped growing.

After a C-section in December 2021, both twins were taken to the newborn intensive care unit (NICU) where Mila spent 45 days before she was strong enough to come home.

But tiny Reagan, who battled sepsis, had to wait 118 days before she could join her sister at home in Washington, Pennsylvania.

Now the twins are both thriving but are still different sizes, with Mila now weighing 12 pounds and Reagan 7 pounds and 5 ounces.

Audrieanna, a claims specialist, said: “When I saw them for the first time Reagan was so much smaller than I imagined.

“The difference between them was crazy.

”They don’t even look like twins they’re such different sizes!

“I knew Reagan was going to be small but she was just so tiny.

“But they were both miracles and pulled through.

Audrieanna and her husband Chase, 29, a union worker, were ecstatic to find out she was pregnant in June 2021 after their first round of IVF, following years of pregnancy struggles.

At six weeks the couple discovered they were expecting twins but were told that Baby B – Reagan – was measuring small and it was possible they would lose her early on during the pregnancy.

“We were told the gestational sac was measuring small and it was likely she would pass,” Audrieanna said.

”But at 15 weeks they reassured us and said that Reagan had caught up.

”It was the best news.

“Everything seemed fine with both of them and we were so excited to have two little girls.”

But at their 20 weeks scan, Reagan was 18% smaller than her sister and falling behind again.

“The doctors were not sure if she would make it at that point,” Audrieanna said.

“But they kept monitoring us.

“I was just praying we wouldn’t lose her.”

At 24 weeks, the couple were given the devastating news that Reagan was now 50 percent smaller and suffering issues with her cord flow- the transfer or nutrients from the mother’s blood across the placenta to the fetus through the umbilical cord.

“They told us that the next time I came for a scan in two weeks she would have passed,” Audrieanna said.

“They were certain she wouldn’t make it because everything they knew medically told them she wouldn’t.

But two weeks later at the 26-week scan, doctors found that Reagan’s heart was still beating.

“They were really shocked that she was still holding on,” Audrieanna said.

“I was determined I would do everything I could for her to make it.”

Audrieanna was admitted to West Penn Hospital at 27 weeks to be monitored.

She made it to 29 weeks before Regan’s cord flow changed and the babies had to be delivered by emergency c-section.

The mom-of-two said: “I heard Mila’s nice little cry and they held her up for me so I knew she was okay but all I could hear from Reagan was a whimper.

“I was in a panic because I could hardly hear her and I didn’t get to see her before they took her away.”

Both twins had to be taken straight to the NICU and Audrienna had to wait a few hours before she was able to see them.

“When I saw Reagan she was so small she could fit in your hand,” she said.

“I knew she was going to be tiny but she was still so much smaller than I had imagined.

“Mila was three times the size.

“But Reagan was fully developed despite how minuscule she was.

”We were finally allowed to hold them when they were five days old.

“It was magical but they were so delicate and tiny.”

When the twins were two weeks old the family were told Reagan had developed sepsis and was being transferred to UPMC Children’s Hospital of Pittsburgh.

“She was so grey she looked dead,” Audrieanna said.

“It was awful that twins had been torn apart.”

After four days, Mila was able to be transferred to the same hospital and the pair were able to battle to health together.

Mila recovered well and was strong enough to go home in January 2022, after 45 days in the hospital.

“It was so lovely to have Mila home but so hard to have to keep traveling back and forth to see her sister and for them not to be together,” Audrieanna said.

Reagan spent another three months in hospital, receiving blood transfusions to help her grow so she could finally come home in April 2022.

“It was amazing to have them both home,” Audrieanna said.

“It’s been quite the journey.

“They still have a big size difference between them.

“When I switch between holding Mila to Reagan I can really feel how much lighter she still is.”

”They’re six months now and thriving and hitting all their milestones.