The images show a number of Russian military vehicles being hit from above by ordnance dropped from drones.
By Joseph Golder July 20, 2022
Facebook
Twitter
Linkedin
Email 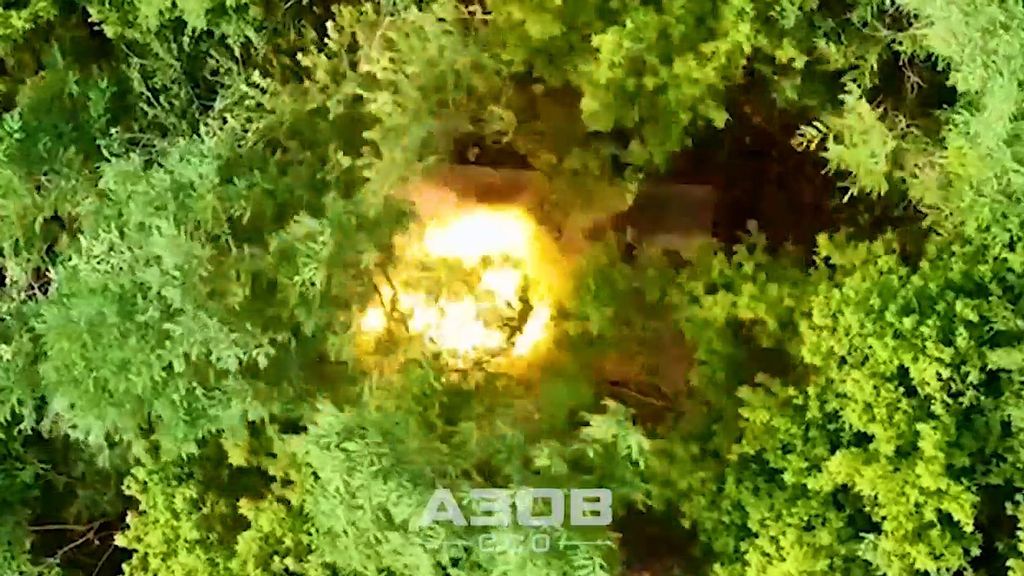 Fighters of the Special operations forces AZOV Kyiv and counter-intelligence officers of the Security Service of Ukraine tracked enemy BMPs in a forest and hit it with cumulative shells from the air in Ukraine. (@AZOVsof/Zenger).

Azov special forces working with counterintelligence officers from the Ukrainian Security service have taken out Russian BMPs by dropping bombs on them using drones, as this footage shows.

The images show a number of Russian military vehicles being hit from above by ordnance dropped from drones.

It is currently unclear where exactly in Ukraine the images were filmed but they were obtained from SSO Azov on Saturday, July 16, along with a short statement saying: “Fighters of the SSO AZOV and counter-intelligence officers of the SBU conducted a joint operation to neutralize enemy BMPs, which periodically caused inconvenience. The equipment was tracked in a forest strip and hit by cumulative shells from the air.”

SSO AZOV was formed on February 24, the day the Russians invaded, as a separate unit made up of Azov veterans. It “performs the task of protecting the territorial integrity of the country from the Russian aggressor.”

The SBU is the Security Service of Ukraine, the country’s main intelligence and security agency. BMPs are Russian-made infantry fighting vehicles that are often not dissimilar to light tanks.

We contacted the SSO Azov for further comment, as well as the Russian Ministry of Defense, but haven’t received a reply at the time of writing.