It was only days later that authorities found four Chinese sailors, named the Seng Kang, who had reportedly abandoned the ship. 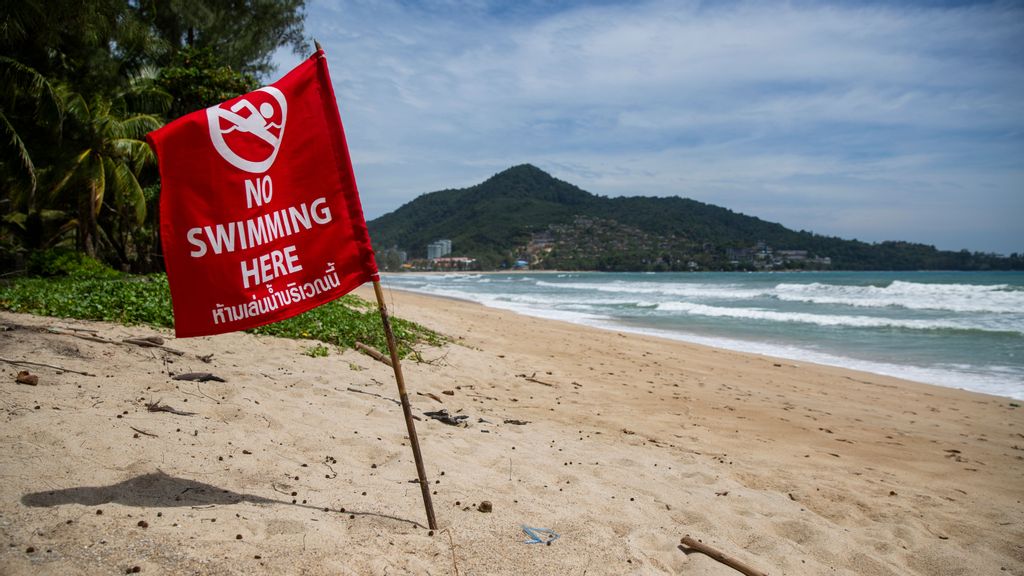 A no swimming sign is seen on Kamala Beach during the islands monsoon season on July 19, 2021 in Phuket, Thailand. (Photo by Lauren DeCicca/Getty Images)

A mysterious ghost ship with no captain or crew on board washed ashore on a secluded island off the coast of Cambodia during an intense storm on July 12, leaving officers bewildered.

Three life jackets from the wreckage were spotted about 160 feet (50 meters) away from where the rusted, old shipping vessel ran aground on the rocky beach of Koh Tang Island Tuesday evening, officials told Cambodia News English.

The secluded Koh Tang Island is located about 30 miles off the coast of Cambodia in the Gulf of Thailand. The island is best known as the site of the last battle of the Vietnam War in May 1975, two weeks after the fall of Saigon.

Authorities with the Koh Tang Observation Force inspected the shipwreck and quickly scoured the shoreline for any signs of the ship’s occupants the following morning, but to no avail, an official with the Maritime Security Observatory told Cambodia News English.

It was only days later that authorities found four Chinese sailors, named the Seng Kang, who had reportedly abandoned the ship. Authorities believe the sailors encountered rough seas, jumped overboard and somehow managed to swim to the island in rough waters, Cambodia News English reported.

The strong winds and waves from the storm drifted the ship to shore.

Cambodia is often used as a gateway to smuggle illegal drugs from Myanmar into wealthier countries in the Asia Pacific region such as Australia, Japan, and Taiwan.

Pirates are still active in the South China Sea, most notably in the Malacca Strait. The strait is one of the busiest shipping lanes in the world.

The four sailors, including the captain of the vessel, were taken in for questioning.

It is unknown if the ghost ship was used for drug or piracy reasons.

The choppy waters and blustery conditions had prompted the country’s Ministry of Water Resources and Meteorology to issue a weather warning earlier in the week to fishermen and tour boat operators. Provincial officials followed suit by ordering a ban on all trips to Koh Tang and the other coastal islands from July 11-14.

The rough seas prevented officials from boarding the ship to investigate further until Thursday, when staff from the Observation Force managed to gain access once the waters calmed.

“At first, we were not able to get close enough to the ship to check its markings. There was no sign of which country it came from,” local official Sopheap San told Cambodia News English.

Cambodia is often affected by water-related natural disasters such as tropical storms and typhoons. Typhoons happen an average of seven times a year in Cambodia, with the hardest hit regions being Ratanakiri, Mondolkiri and Kratie.

The ocean floor of the Gulf of Thailand has shipwrecks that are open for scuba diving.

Produced in association with Accuweather.