“She was with us the last two Christmases, but she is very naughty. She ate profiteroles and pulled lettuce out the bowl.”
By Simona Kitanovska July 18, 2022
Facebook
Twitter
Linkedin
Email 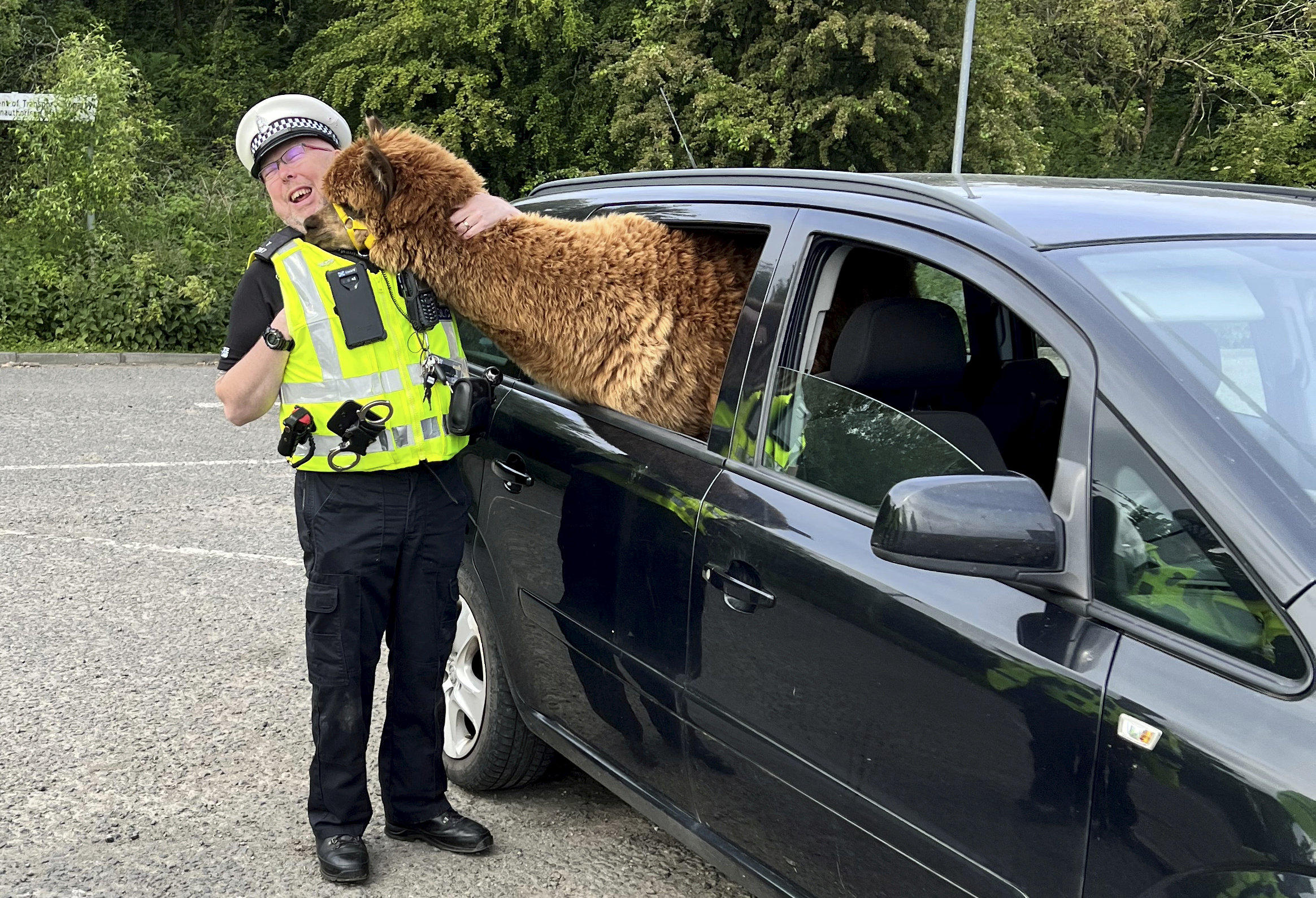 Meet the alpaca who thinks she's a dog - and even travels round in a Vauxhall estate car bought especially for her. (Katielee Arrowsmith, SWNS/Zenger)

Meet the alpaca who thinks she’s a dog – and even travels round in a Vauxhall estate car bought especially for her.

Spoiled two-year-old Annie the Alpaca was rejected by her mom and had to be bottle-fed every two hours by owner Dannie Burns.

Dad-of-three Dannie brought her with him everywhere he went as Annie needed a strict feeding routine, and she lived in his house in Stirling, Scotland, along with three dogs and two cats – but caused too much trouble and now sleeps on the porch.

Annie is currently expecting her baby, and Dannie is not sure how she will take to motherhood, as she has rejected mixing with the herd of 75 alpacas that roam around in fields.

She prefers to socialize with the three Labradoodle dogs and believes she is one.

Annie has been barred from the house due to chewing through cables, raiding profiteroles at Christmas, and can even open doors with her mouth.

But she loves to relax on car journeys in the back of the Vauxhall Zafira bought to accommodate her – which Dannie says will be going to the scrapyard rather than being sold on.

Annie folds her legs under her on the backseat like a camel and doesn’t need a blanket to make her comfy.

She loves to stretch her head out the window and recently charmed traffic cops who stopped to take pictures with her.

Grandfather-of-four Dannie said: “Annie was rejected by her mum.

“She was in our house for six months, getting bottle-fed every two hours.

“She was eating everything – toy soldiers, ribbons, bits of plastic.

“She swallows them – she’s a nightmare.

“She sleeps on the porch now.

“She was with us the last two Christmases, but she is very naughty. She ate profiteroles and pulled lettuce out the bowl.

“We are hoping she will go back with the herd once she has her baby.

“She wants nothing to do with the other alpacas. She hides when she sees them.

“She needed bottle feeding every two hours, through the night, like a newborn.

“We bought the car because she came everywhere with us.

“We leave the back door open, and she jumps in the back.

“It was one of those situations that just happened. I needed to take her everywhere with me.

“It was bought particularly for that.”

Standing around 4 feet tall, Annie is about the same size as a St. Bernard shepherd dog.

She lives on a diet of grains, barley, and oats, as well as other stuff she scavenges.

Dannie’s grain bill last year was about 35,000 dollars for the herd, and he estimates it will be more like 42,000 dollars this year due to the grain coming from Ukraine.

Annie lives a luxurious life as a family pet and wanders around doing what she wants.

Dannie said: “I used to find her in the house looking out the window at the other alpacas.

“She’s got a superiority complex over other alpacas.

“She roams about with the dogs, and learnt to open door handles with her mouth.”

He first bought two alpacas on a whim 14 years ago after losing his job and paid in cash after driving down to Derby with a van to pick them up.

Dannie described keeping them as an “addiction” and has ten staff on hand at The Alpaca Trekking Centre in Stirling to look after cows, sheep, and even a golden eagle.

He said Annie is not as much hassle as a puppy for chewing but that she has a penchant for used chewing gum and chocolate.

“She chews cables – they’ve got no front teeth at the top, but at the back, they’re quite sharp.

“It’s not as bad as having a puppy which chews your shoes.”