Skirting The Issue: Garbageman Works In A Kilt Because His Bosses Banned Shorts

“For the last five years, I've been asking about wearing shorts, and they've just slung health and safety at me.”
By Simona Kitanovska July 18, 2022
Facebook
Twitter
Linkedin
Email 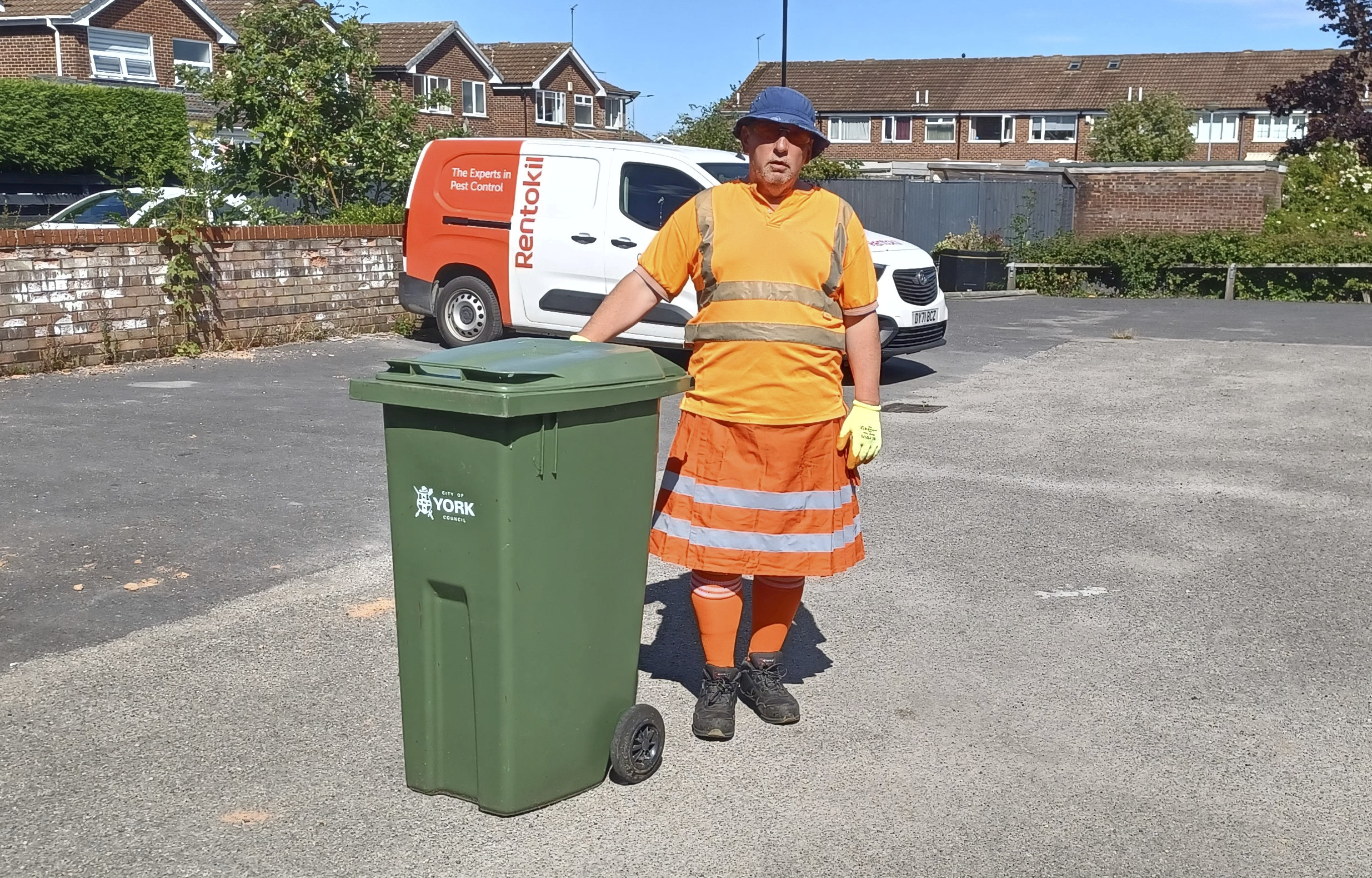 Garbageman works in a kilt because his bosses banned shorts. (Matthew Newby SWNS/Zenger)

A garbageman whose bosses banned him from wearing shorts on “health and safety” grounds has completed his rounds – in a high-visibility KILT.

Lee Moran, 50, mounted his striking protest as temperatures soared above 77 degrees after bosses at York City Council in England told him he had to remain covered up.

The dad-of-three had campaigned to wear shorts for years in the height of summer but was always told that health and safety rules didn’t permit it.

But when Lee found out this wasn’t true, he claims his managers confessed they’d prevented garbage collectors from wearing shorts to protect their ‘public image.’

Bizarrely, one manager did say that kilts were permitted, so on Monday, June 11, he donned a hi-vis fluorescent orange kilt in protest at their cold-hearted policy.

Lee said the response to his protest had been “absolutely amazing,” and he hoped to convince the council to change its approach before the temperatures rise next week.

He said: “For the last five years, I’ve been asking about wearing shorts, and they’ve just slung health and safety at me left, right, and center.

“But one of the managers approached me and said, ‘look, Lee, you can wear a kilt. There’s nothing about wearing a kilt’.

“So I waited until the temperature reached over 25 C. [77 Fahrenheit], and Monday was the perfect opportunity for it.

He added: “The public response has been absolutely amazing, and I’ve even had some City of York councilors ring me and message me saying, “We’re right behind you.”

Lee said he’d always trusted his managers when they told him he was banned from wearing shorts on health and safety grounds.

But when he went online recently and looked up the regulations, he was shocked to find out that this was, in fact, untrue.

He said: “This year, I decided to have a look online. I’ve looked at the health and safety laws, and there are no laws regarding binmen wearing shorts.

“One of the managers then admitted it was basically due to ‘reputation,’ so I said, ‘We’re sweating, doing hard work in the sun just to look good for the public?’

“I said, ‘It’s alright saying ‘health and safety,’ but you’re not taking our well-being into consideration at the same time.

“We’re sweating in these trousers, we’re at risk of collapse.'”

Lee said he ordered the 71 dollar kilt online from a supplier in Canada and put it on only after his suspicious managers had made inquiries about his clothes that day.

He said: “Instead of going to work like I normally do, I met up on the job.

“I had my normal work attire on, and I waited for the manager to ring the driver to see if I had the kilt on.

“As soon as the manager rang up, I got changed into the kilt and worked all day in it.

He added: “My workmates are all for it and that. They loved it.”

Lee, who works across the city of York in the west of England, Monday to Friday, said many residents had sympathized with his protest.

He said: “Loads of people came up.

“They wondered why I was wearing a kilt, so I explained to them, and they said, ‘; That’s ridiculous. I can’t believe they won’t let you wear shorts.’

Lee said he hoped York City Council would change their policy, especially as another nearby local authority was letting their binmen ditch their trousers.

But he had concerns they weren’t acting fast enough, with thermostats set to rise above 40c next week in some parts of the country.

He said: “They’ve phoned Scarborough council, just 40 miles from us. They’re allowed to wear shorts, so they’ve asked them about their short policy.

“And basically, they’ve gone out and got some shorts from suppliers, so hopefully, we’ll get a review.

“However, the health and safety manager just happens to be away on holiday this week.

“We’re saying we need this now – we don’t want to be waiting another week. It’s going to be red hot next week.

“They said, ‘these things take time’, but we haven’t got time. The weather isn’t going to wait for us.”