The 'Z' is one of the symbols, as well as the letters 'V' and 'O' that can be seen painted on Russian military vehicles.
By Joseph Golder July 18, 2022
Facebook
Twitter
Linkedin
Email 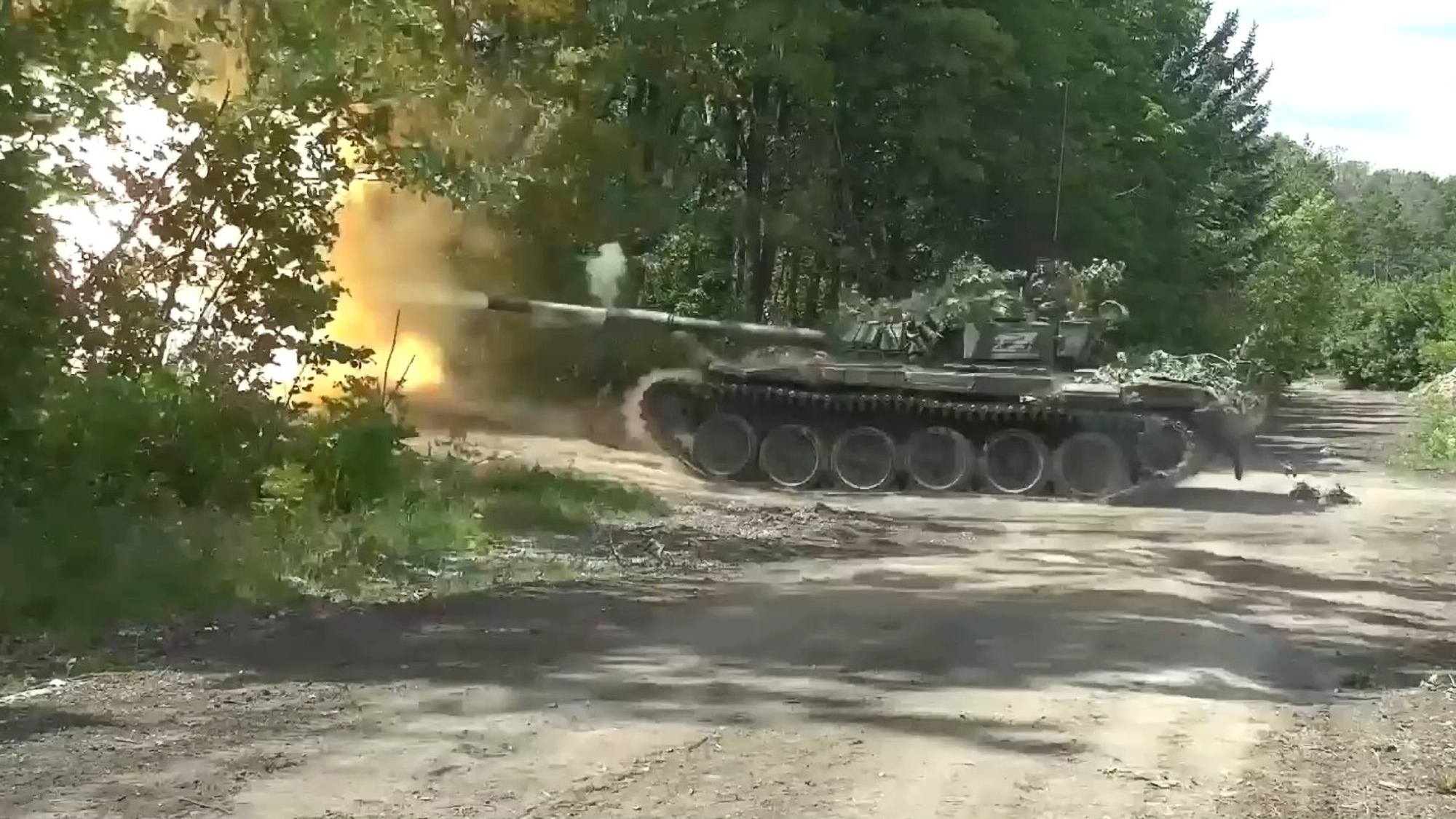 Combat work of a unit of Russian motorized riflemen in Ukraine. (Ministry of Defense of Russia/Zenger)

This footage obtained from the Russian Ministry of Defense appears to be an attempt to cast their tanks in a positive light despite having lost 1,672 of them so far.

The images show various Russian tanks, some seen sporting the now infamous letter ‘Z’, firing rounds with their long guns and their heavy machine guns, presumably on unseen Ukrainian positions, and maneuvering in forested and in open terrain.

The footage, shot from right next to Putin’s war machines, and also featuring onboard imagery, is cobbled together in an apparent bid to depict the invading forces as making some sort of progress.

The unnamed soldier claims, while showing the weapon to the camera: “A foreign-made rocket launcher, the enemy left us such trophies during their retreat.”

We have not been able to independently verify the claims or the footage, which were obtained from the Russian Ministry of Defense (MoD) on the morning of Friday, July 15, along with a statement claiming the images show “the combat work of a unit of Russian motorized riflemen, reinforced by a tank platoon and a platoon of anti-tank guided missiles.”

The Russian MoD also claimed: “During the battle, the crews of infantry fighting vehicles BMP-3 of a motorized rifle company from cover fired from standard 100-mm guns and 30-mm cannons at the accumulation of enemy manpower and equipment.

“Having fired several shots, the Russian armored vehicles changed positions and continued to fire at the area where Ukrainian nationalists were concentrated.

“Reconnaissance of fortified positions, from where enemy tanks fired, was carried out by the crew of the complex with an unmanned aerial vehicle, which transmitted the coordinates to the command and observation post of the motorized rifle unit.

“The Ukrainian Armed Forces tank was destroyed by return fire from a Russian T-72B3 tank. In turn, the crews of the BMP-3 destroyed the stronghold of such a company of the Armed Forces of Ukraine, which was confirmed by means of objective control.

“The retreating armored vehicles of the militants were destroyed by anti-tank missile systems.”

Russia has so far lost 1,672 tanks since its illegal invasion of Ukraine, according to the General Staff of the Armed Forces of Ukraine.

Russian tanks are known to suffer from numerous vulnerabilities, including a weakness to the jack-in-the-box effect, due to a design flaw.

The jack-in-the-box effect is when a tank’s ammunition ignites, causing its turret to be blown clean off.

The T-72, T-80 and T-90 tanks all feature an auto-loading system that allows them to do without a fourth crew member, making the tank more compact and therefore harder to hit.

But this comes at a cost: if the ammunition compartment is hit, it runs the risk of detonating inside the tank, with the resulting explosion blasting the turret clean off.

Most modern Western tanks, such as the American M1 Abrams or the French Leclerc, for instance, do not suffer from this problem as they feature vents that can open and channel the explosives, and their explosive force when detonated, away from the crew.

This has two key advantages: increasing the survival rate of the crew and decreasing the amount of maintenance that damaged tanks require.

Russia invaded Ukraine on February 24 in what the Kremlin is calling a “special military operation.” July 15 marks the 142nd day of the invasion.

Ukraine’s President Volodymyr Zelenskyy has called the attack “an open act of terrorism”.

President Joe Biden’s Treasury Secretary Janet Yellen has said that Russia’s war in Ukraine is the biggest threat to the global economy. She added that representatives of Putin’s regime “have no place” at the G20 meeting in Indonesia.