Risky Business: A Glass Of Wine A Day May Lead To Alzheimer’s

Consuming just seven units of alcohol a week – half the recommended maximum – fuels iron in the brain. 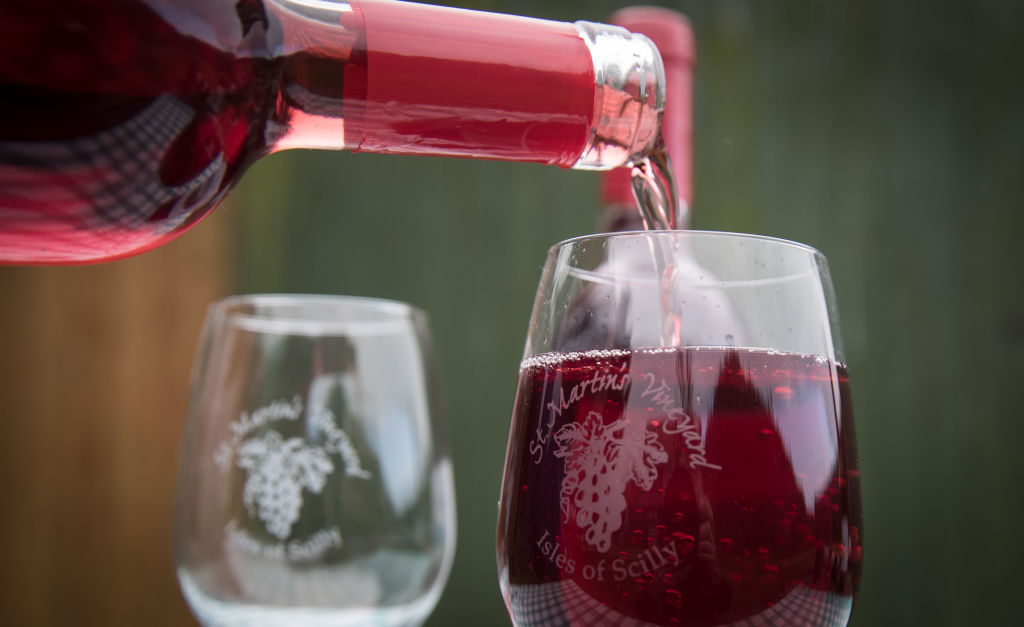 Valerie Thomas of St Martin's Vineyard, the most south-westerly vineyard in England, pours a glass of wine produced on her farm on St Martin's on the Isles of Scilly on February 18, 2017 in Isles of Scilly, England.(Photo by Matt Cardy/Getty Images)

Just one small glass of wine a day could give you Alzheimer’s or Parkinson’s, according to new research.

Consuming just seven units of alcohol a week – half the recommended maximum – fuels iron in the brain.

Booze suppresses a hormone that controls the body’s absorption of the mineral – increasing cognitive decline.

The lead author of new research, Dr. Anya Topiwala, of the University of Oxford, in the United Kingdom, said: “In the largest study to date, we found drinking greater than seven units of alcohol weekly associated with iron accumulation in the brain.

Dementia patients have been found to have higher levels in some regions – including deep grey matter. The same pattern has been found in Parkinson’s sufferers.

It is linked to the formation of rogue proteins known as amyloid beta which clump together – killing neurons.

Iron from the blood is essential for brain functioning – but it needs to be tightly regulated.

The study of around 21,000 people from the UK adds to evidence even moderate drinking can damage mental health.

Getting through seven units or more of alcohol per week was linked with markers of higher iron in the basal ganglia.

Iron accumulation in some areas of the brain was also associated with poorer mental skills.

Participants from the United Kingdom Biobank (UKB) reported their own alcohol consumption and underwent MRI (magnetic resonance imaging) brain scans. They were aged 40 to 69.

Almost 7,000 also had their livers imaged to assess levels of systemic iron. All individuals completed a series of simple tests to assess cognitive and motor function.

Although nearly three percent classed themselves as non-drinkers average intake was around 18 units per week – equivalent to 7&half; cans of beer or 6 large glasses of wine.

Dr. Topiwala said: “Never-drinkers appeared to have the lowest levels of brain iron. This is in keeping with our earlier work indicating there may be no safe level of alcohol consumption for brain health.

“Moderate drinking is highly prevalent, so if elevated brain iron is confirmed as a mechanism by which alcohol leads to cognitive decline, there are opportunities for intervention on a population scale.”

The number of dementia cases worldwide is expected to triple to more than 150 million by 2050. With no cure in sight there is an increasing focus on protective lifestyles.

Dr. Topiwala pointed out drugs that reduce iron in the brain, known as chelators, are already being investigated as potential Alzheimer’s and Parkinson’s treatments.

She added: “Alcohol-related brain iron may be partially mediated by higher systemic iron levels, but it is likely there are additional mechanisms involved.

The NHS advises men and women to down no more than 14 units of alcohol a week – six pints of beer or ten small glasses of wine.

Alzheimer’s and other forms of dementia affect more than 920,000 people in the U.K. – a figure that will reach 2 million in the next three decades. The study was published in PLOS Medicine.

«Previous Post
Obvious Culprits: Most Consumers Claim To Spot Suspicious Websites»Next Post
Crib Away From Me: Child Would Rather Fall Asleep On The Dog, Than Its Own Bed