According to the police, the stubborn bull was finally brought ‘into custody’ after three days on the run. 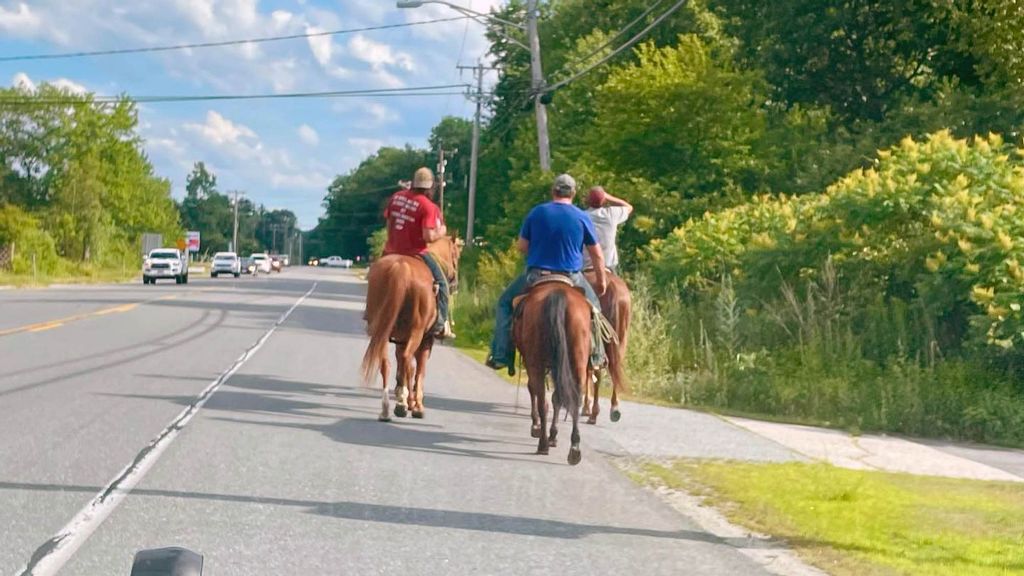 This is the bizarre moment two cowboys attempt to round up a runaway bull along a busy road after a three-day chase with police.

The scenes were filmed not in the Wild West, but in the sedate eastern town of Pelham, New Hampshire, in the United States, which is home to just over 14,000 souls. It lies on the Massachusetts border, not far from Boston.

According to the police, the stubborn bull was finally brought ‘into custody’ after three days on the run.

The Pelham Police Department said that the bull’s owner had to call in the “real cowboys” to catch the rogue animal with the help of local officers.

In the footage, two cowboys are seen racing after the young bull past a car park, where numerous pickup trucks can be seen parked, with their lassos ready to throw.

But the crafty bull swerves behind a stopped car and the cowboys lose their target. The two riders, wearing cowboy hats, can then be seen galloping after the runaway bull, down the road.

A dog can also be seen heading after the unusual trio, some distance behind them. It is currently unclear if the dog belonged to one of the cowboys.

The footage shows the right side of the road free of traffic, while a traffic jam appears to have formed on the other side of the road. In the footage, a police officer can be heard telling a colleague that the bull “is coming your way.”

The police said that the bull was finally captured by the cowboy-cop team and was returned to the farm safe and sound. It is currently unclear how it had escaped.

“Special thanks to the real cowboys called in by the farm owner to get the job done!

“Corporal Kelly, Officer Russo, Officer Brown, Officer Simes, Officer Peters and Detective Vieira all did an excellent job supporting the cowboys, controlling traffic and protecting the streets and the citizens while all of the excitement unfolded.

“Thank you to everyone who kept an eye out and called in their sightings to get this big guy home safe!”