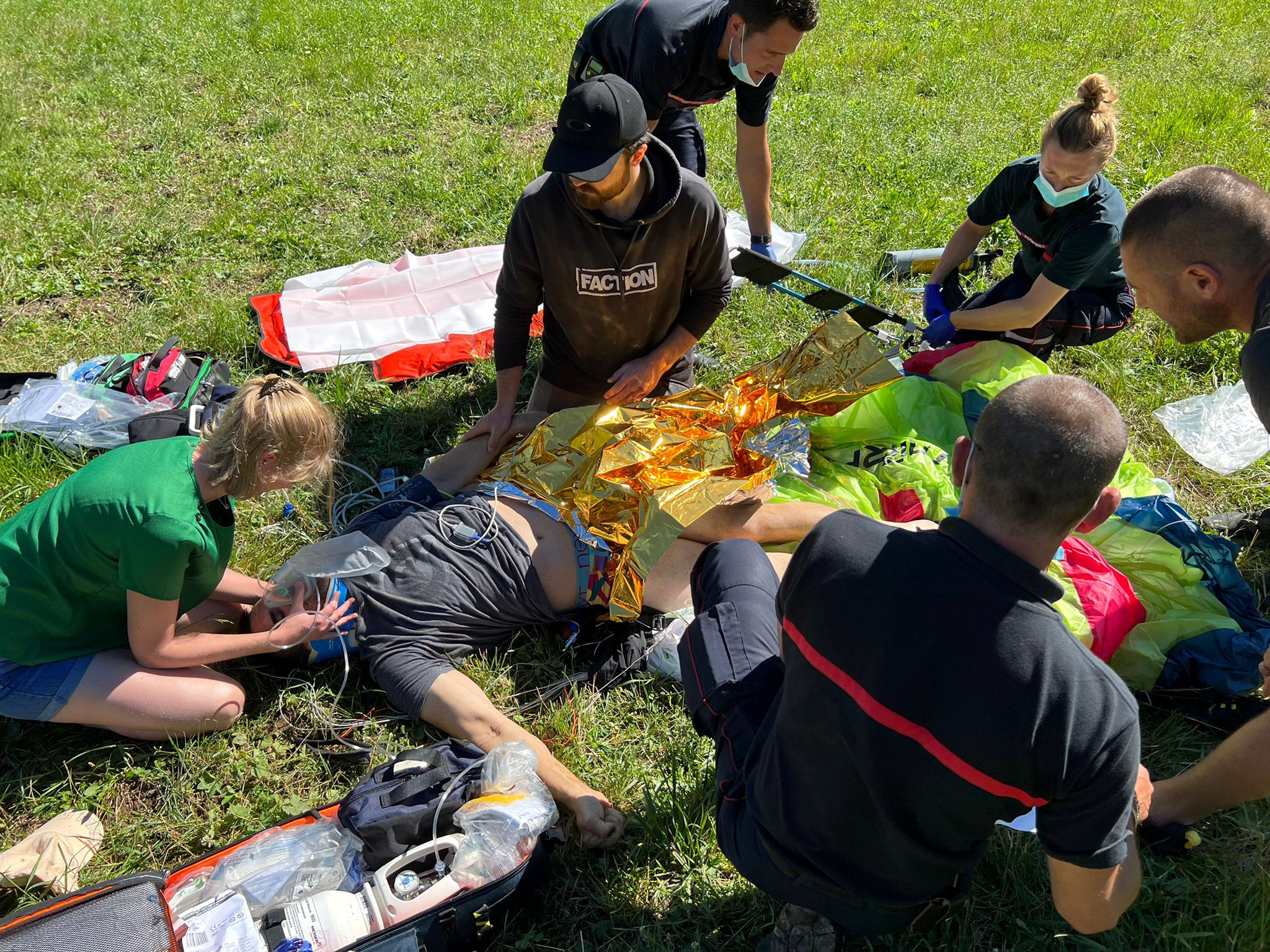 An elite British army parachutist has been seriously injured after a horror speed flying accident in the south of France. (Matthew Newby, SWNS/Zenger)

An elite British army parachutist has been seriously injured after a horror speed flying accident in the south of France.

Lance corporal Lee Crudgington, 38, has been treated for a severed aorta and broken pelvis, family say.

An extreme sport, speed flying is an advanced form of paragliding, which involves using a small, specialized, high-performance parachute wing for making death-defying descents from heights such as mountains to swoop close to slopes.

The military man with 17 years of service is part of the Parachute Regiment and the British Army’s elite Red Devils parachute display team.

Father-of-two Lee, who has done over 5,000 skydiving jumps, was on vacation with partner Katy when he had an accident while speed flying on July 2.

Lee is currently in a French hospital, where he has undergone 12-hour surgery on his pelvis, with insurers unable to cover his fees.

Soldiers’ charity Support Our Paras is trying to raise more than 236,000 dollars to cover his medical fees and repatriation costs.

The fundraising page had raised a little more than 34,000 dollars of Thursday morning, July 14.

The British Army said it is unable to support Lee financially until he returns to the United Kingdom because his injuries occurred outside of active duty.

A military insider said the regiment had sent staff to Lee’s hospital in France to help with translation.

The source added that Lee’s recovery will be fully supported in the UK with the aim of bringing him back to service.

Lee’s partner Katy wrote on Facebook on Tuesday, July 12: “I don’t really have the words to write about Lee’s accident as it has been a very traumatic week for us here in France waiting patiently for Lee to regain stability.

“Lee has survived an extremely difficult injury as he severed his aorta and underwent emergency surgery, the fact he is still here to fight to the next stage is a testament to his character!

“We have and shall continue with your help to receive tremendous support from support our paras and the regiment and we are all looking forward to the next stage.”

Lee, who joined the 2 Para regiment in 2005 and served in Iraq and Afghanistan, is based at Merville Barracks in Colchester, Essex, in the east of England.

He is also a jump coordinator with the Red Devils, which he joined in 2012, and is a 15-strong team of British Army parachuting experts that performs risky displays for the public.

Support Our Paras wrote on the fundraising page: “Lee is one of our own and family take care of each other – Support our Paras have been supporting him and his family in France, but now they need your help.

“On top of mounting foreign medical costs, Lee will need a specialist aeromedical team to fly him back to the UK, where he will undergo further surgery and start a long period of rehabilitation.

“Support Our Paras are committed to supporting Lee with his medical costs and repatriation, but would welcome any contributions towards the total.”

A British Army spokesperson said: “Our thoughts are with Lance Corporal Lee Crudgington and his family.

“Service personnel who take part in adventurous activities abroad while off-duty need their own private insurance cover as this is not provided by the Ministry of Defense.”

The fundraising page can be found here: https://www.justgiving.com/campaign/crudgingtonappeal