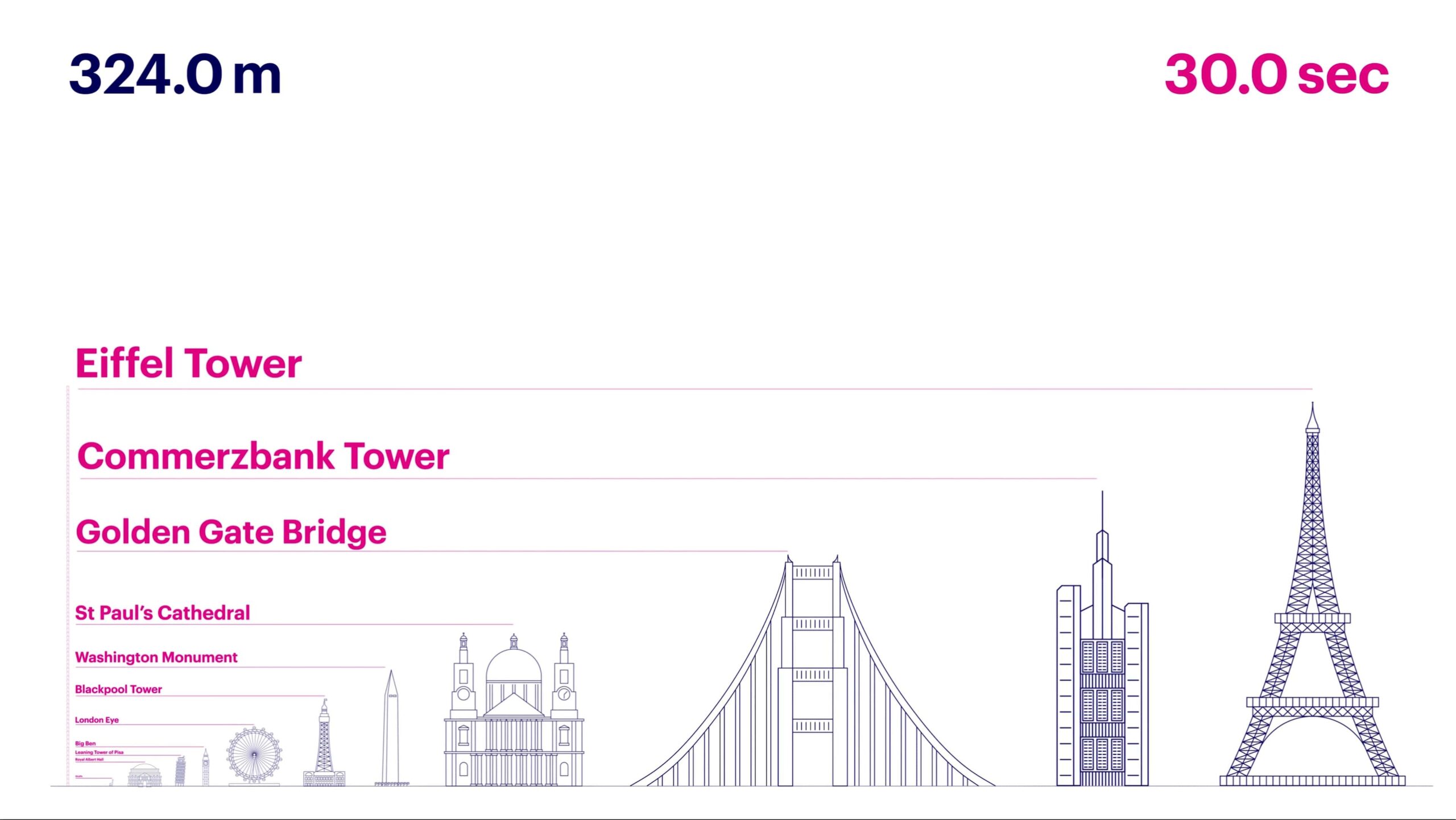 This jaw-dropping animation shows exactly how many paper coffee cups are bought in the UK - every single second. (Jon Mills, SWNS/Zenger)

This jaw-dropping animation shows exactly how many paper coffee cups are bought in the United Kingdom – every single second.

The stack of coffee cups increases as the seconds tick by – overtaking the height of a giraffe in just half a second and towering over London’s Big Ben after 10.

Before 14 seconds is out, the pile would stretch as high as Blackpool Tower, the 125th-tallest freestanding tower in the world, located in the town of Blackpool in The United Kingdom, and if you wait half a minute, you’ll see it grow taller than the Eiffel Tower.

It comes after a study of 2,000 adults, by U.K.-based hygiene and health company Essity, found Brits buy more than 3.2 billion drinks in paper cups every year – just under two billion of which won’t make their way into an appropriate recycling bin.

The average person purchases five paper cups every month, a total of 269,652,450, across the adult population.

But only 39 percent of those, who buy from fast food chains or restaurants, will make the effort to dispose of their cups properly.

A proportion of the cups left on tables or the floor would make their way to recycling due to environmentally-conscious staff picking them up and disposing of them responsibly.

The shock findings show half of the 2,000 adults polled think it is too inconvenient to try and find a suitable recycling point, and often easier to deposit in the nearest general waste bin.

A spokesman for Essity, which also created the tool, said: “These are huge numbers, both in terms of how much people are buying and consuming, and how many paper cups aren’t making their way to the appropriate recycling points.

“We can turn them into new Tork products like the paper towels you use when visiting a washroom.

“If they’re not recycled then they end up in landfill and that has a huge environmental impact.”

The study also found fast food chains and vending machines are the most popular places to purchase takeaway drinks such as coffee, tea, hot chocolate and fizzy drinks.

Of the workers polled, 23 percent buy more drinks in paper cups now they have returned to the workplace, while 15 percent admitted the good habits they developed when working from home have already dropped off.

Only 36 percent would bother finding somewhere on, or off the commute, to dispose of their recyclable drink container, while 22 percent would leave it on public transport.

However, across all adults polled via OnePoll, 51 percent feel guilty when not disposing of their cups responsibly.

And 39 percent own a reusable cup in their attempt to save the planet.

Unfortunately, despite their best intentions, 71 percent have been known to forget to take their eco-friendly vessel out with them.

As many as 71 percent claim to be very concerned about recycling properly but 36 percent think it can be very difficult to locate suitable points when out and about.

Of these, 59 percent want to save the environment, while 35 percent said they are a pain to dispose of and 26 percent never know which recycling points to use.

A spokesman for the hygiene and health company, which is part of the nationwide Paper Cup Recycling Scheme, added: “Many people don’t know about the scheme here in the UK which makes it really easy for people to dispose of their paper cups responsibly as and when they want to.

“Many of the biggest and most popular high street chains, including Costa Coffee, Greggs, and McDonalds, are part of the scheme which allows people to buy their drink from one shop and drop their empty cup into a recycling bin at another.

“There are approximately 5,000 recycling points throughout the UK.

“The cups are then collected on a regular basis, where they are taken to our factory, stripped of any plastic coating, and then recycled back into fiber products such as paper towels and napkins.

“In the long run we hope to make this into a completely cyclical process, where these chains are then supplied back with the materials which were collected.”