High Rise: Amazing Footage Of A Large Shark Jumping From The Ocean

In the video the thresher shark can be seen leaping high out of the water right next to the boat. 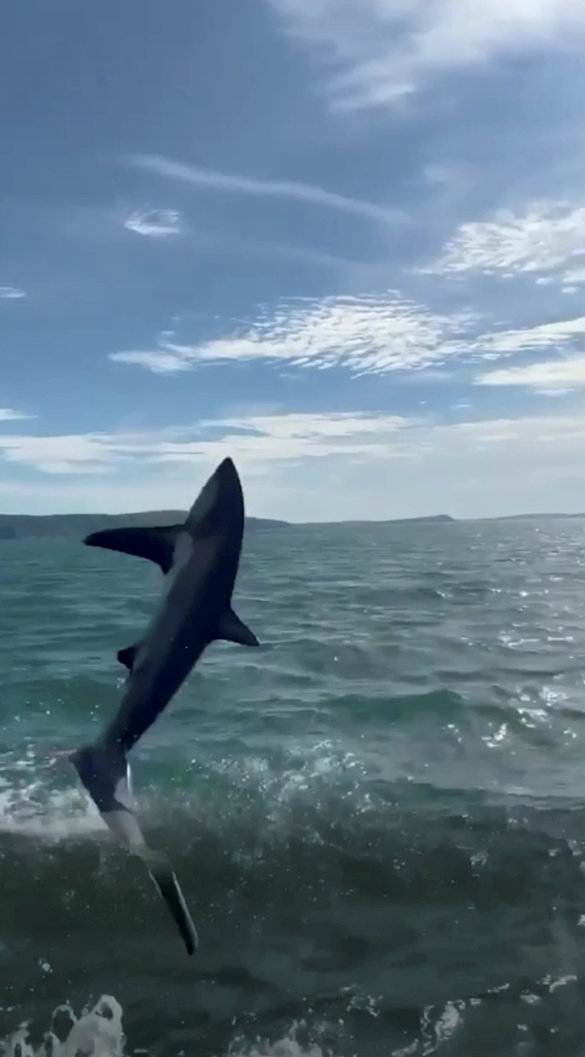 This rare footage captures a large shark jumping from the ocean – just a couple of feet from a boat trip off the British coast.

The astonishing film shows the rare thresher shark making a special appearance to a wildlife trip group in Cardigan Bay, in West Wales, in the United Kingdom.

In the video the thresher shark can be seen leaping high out of the water right next to the boat.

It then emerges from the sea just moments later as the boat is moving away – much to the shock of those onboard.

The extraordinary footage was captured by Tony Barber, owner of A Bay to Remember, a company which provides dolphin and wildlife trips in and around the area.

Tony, 49, from Cardigan, said: “We are usually used to spotting bottle-nosed dolphins – who are resident where we are.

“On Monday, we were out with a boat of passengers for one of our wildlife trips – we had seen some dolphins so everyone was happy.

“We decided to try and see some seals and then we saw something breach in front of us, so we brought the boat to a stop thinking ‘hang on a minute, what was that?’

“It then came out again right by the side of us – it was so close!

“And that’s when we clocked what it was and I immediately started filming, the third time it came was just behind our boat.

“It was about three meters long – and we have only seen thresher sharks twice before since running these trips.”

Tony says the group were only 50 meters from the shore off Pen-yr-Afr, in Pembrokeshire, southwest Wales, UK, when the “exciting” incident occurred.

He explained how their sightings are “quite unusual” to see, especially so close to land.

Tony, who has been running these trips with his wife for 15 years, said: “Dolphins come out of the water head-first and go back in head-first, whereas thresher sharks come out and just fall back into the water.

“Unlike a dolphin who comes to the surface to breath regularly, sharks don’t – so unless you are diving, they are much more difficult to get a glimpse of.”

He added: “We see the same things a lot, and never usually have many unusual sightings.

“So it was really exciting to see something we had not seen before.”

The thresher shark is a migratory species that passes through UK waters during the summer, according to The Wildlife Trust.

They are considered to be harmless to humans and can grow up to 20 feet in length and weigh up to a staggering 750 pounds.

They can live for up to 50 years and are classed as vulnerable according to the International Union for Conservation of Nature.

The impressive sighting is the second shark encounter captured on film in west Wales in just the past few days.

Last week, two friends out on a boat in Tenby witnessed a large basking shark swimming close to the town’s North Beach.