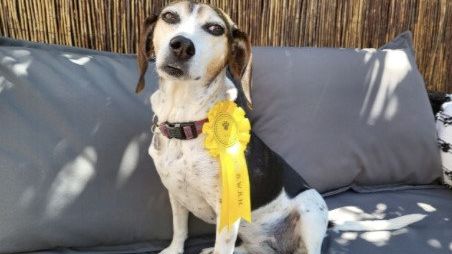 A family were left stunned when their dog escaped only to return later that day with a rosette from a dog show. (Tony Kershaw, SWNS/Zenger)

A family were left stunned after their dog escaped only to return later that day with a rosette from a dog show.

They looked all over their house in Bolney village, located in England’s county of West Sussex, in the United Kingdom, with their two daughters and their neighbors even joining in.

Paula, 48, had called the police, vets and dog warden in a frantic bid to find her.

Little did they know John Wilmer had spotted the pet by the side of the road just minutes after she escaped as he took his two dogs to a show in the village of Felbridge.

The family’s fears were eased when Paula spotted a Facebook post by John asking for the dog’s owner to get in touch.

And once he knew the owners had been told, John decided to enter Bonnie into the competition for best rescue dog and she returned with the third place rosette.

When Bonnie got back she just thought she had had a fun day out but “knows she shouldn’t have run out in the morning.”

“Bonnie is normally there first but she was not there.

“We thought maybe she is not interested in food and did a full search of the house. I could not see her.

“I was walking back to the kitchen when I saw the gate had swung and I thought ‘oh no’.

“A woman next to the petrol station said she had not seen a dog just then but saw one 15 minutes ago.

“Both our neighbors helped look for her, we didn’t ask them, they just did it.

“All along she had been picked up by this guy who had seen her running along the side of the road.

“She had no collar on, we had taken it off the night before.

“He must have picked her up within about five minutes of her getting out.

“Our three-hour search was totally fruitless.

“He was running late for the dog show and said on a Facebook page ‘does anyone know this dog?’

“My wife saw it a couple of hours later.

“She had been phoning everyone from the police to the vets and dog warden.

“As soon as he knew everything was going to be OK he thought “I might as well enter her into the best rescue dog competition”.

“When my wife contacted him he said Bonnie was found within spitting distance of where we live.

“We couldn’t believe it. You could not make it up.

“Bonnie was absolutely fine when she got back. She just thought she was having a great day out.

“She knows she shouldn’t have run out in the morning.

“I heard other dogs were going by that morning and so I think she escaped trying to follow other dogs.”

Bonnie was rescued from the streets of Crete alongside Cleo when she was just one year old.

Cleo has won three rosettes at dog shows for Greek dogs but the couple, who are both dental technicians, had never entered Bonnie into any competitions.

Peter added: “We never pursued it with Bonnie. We should do now.

“When she was missing I had five different outcomes in my head, the best being that she came back.

“This was even better than that, she came back with a rosette.”