Tower Shock: Angry Residents ‘Left To Rot’ By A Council At A Mold-Infested Tower Block

More than 50 families reside at the high-rise where it "literally rains indoors" and has mold so thick it can "almost be tasted."
By Simona Kitanovska July 14, 2022
Facebook
Twitter
Linkedin
Email 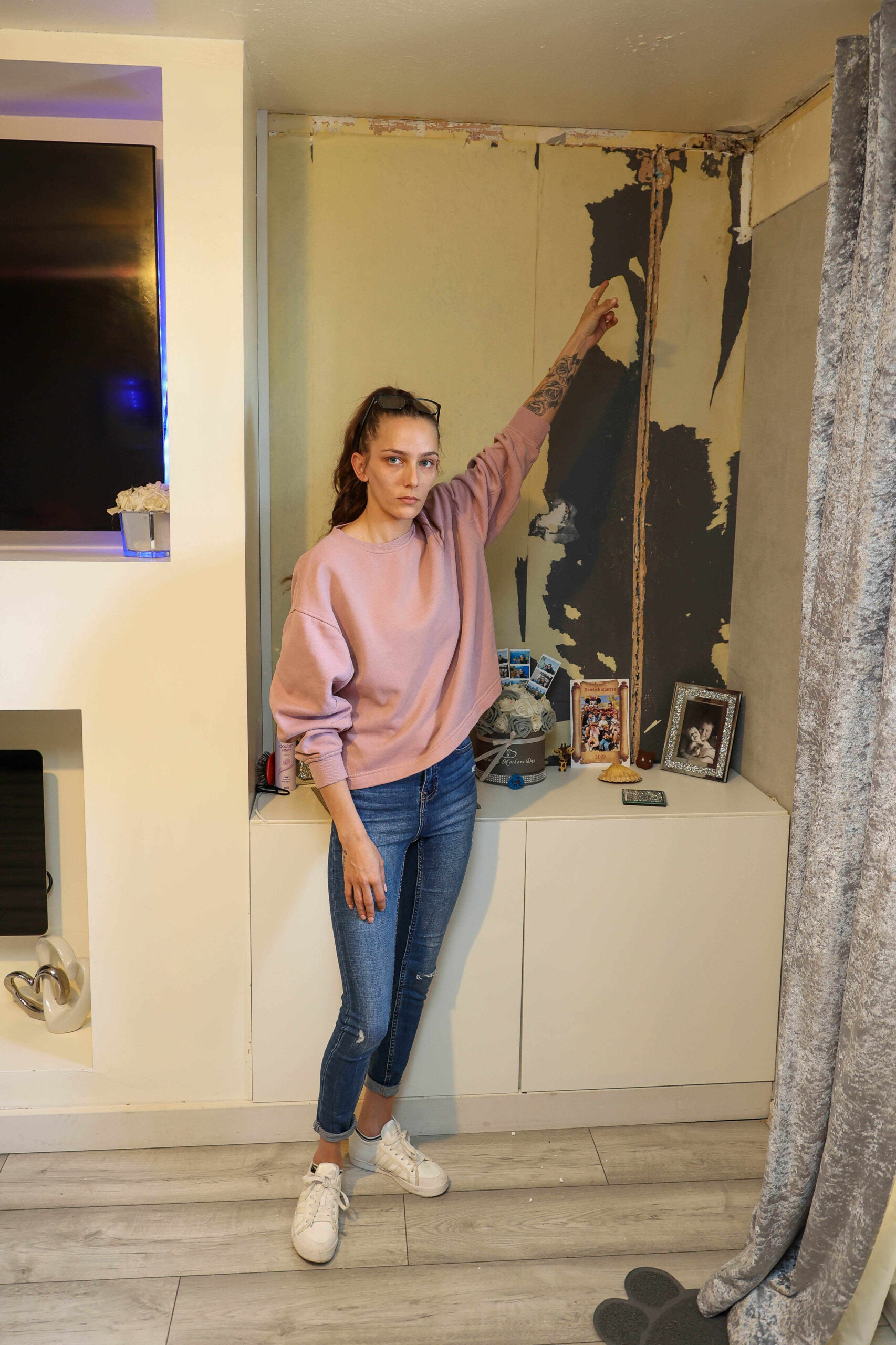 Angry residents have told how they have been left to rot at a mould-infested tower block where mice fall from the CEILING and leaking roofs let rain pour in. (Anita Maric, SWNS/Zenger)

Angry residents have told how they have been “left to rot” at a mold-infested tower block where mice fall from the ceiling and leaking roofs let rain pour in.

Locals living at Jordan House in the village of Castle Bromwich, located in England’s West Midlands county, in the United Kingdom say their lives are being made a living hell after being forced to live in horrific conditions.

More than 50 families reside at the high-rise where it “literally rains indoors” and has mold so thick it can “almost be tasted.”

They claim they are being forced to live in unsafe conditions due to the threat of leaking water getting into the electrics at the building, which is also infested with mice.

Residents say they have had little or no support from Birmingham City Council and feel like they have “simply been left to rot.”

Chase Simper, 26, who lives with his partner Tammy Hill, 29, says he fears for the health of their two children Mason, seven, and four-year-old Cody.

The former warehouse worker said a mouse even landed on his shoulder after dropping from a lift shaft while one of his sons had found a mouse in his bed at night.

The couple say they also have to heat their children’s clothes up in the morning using a hair dryer because they are so damp and they have no working heating.

Chase, who has started a petition calling on the council to resettle residents, said: “It is a living nightmare and I am at the end of my tether.

“The place is a massive health and fire hazard and it has been going on since we moved in six years ago.

“At first we discovered there was no heating so they sent us a single plug-in storage heater and considered the problem solved. So that set the tone of things to come.

“Now it literally rains inside our house. The leaking is non-stop, we are forever putting towels down but they are soaked after a few hours.

“The other night at 2.30 a.m. we were awoken by our fire alarm as water had got in and set fire to it.

“All they did was come and wrap some tape around the wires. We don’t feel safe living here anymore but we have no choice.

“We’ve had over 300 repair notices in six years. We’ve tried discussing rehoming but they say we have to stay put.

“There is mold in every corner of our house and we have redecorated several times. It’s a constant, never-ending stress.

“The place is also infested with mice. Two weeks ago one fell from the ceiling in the lift and bounced off my shoulder onto the floor. It’s horrendous.

“One night, one of the boys came running to me because there was a mouse in his bed. That’s why we got a cat, to get rid of the mice, I don’t even like animals.

“My partner’s health has suffered, she has chronic fatigue syndrome, and I no longer work because of the stress this has caused.”

The outside of the block is currently covered in grey scaffolding as recladding work takes place making the place “look derelict” and “about to be bulldozed”.

Chase added: “That has been going on for over a year. They are trying to make the outside look nice but they don’t care about what is happening inside.

“In the meantime it looks like the bulldozers are about to come in, which would be the best thing for it.

“The council did provide some new kitchens, living rooms and bedrooms for some flats – but they had to rip those out again because all those got water damaged.

“They just aren’t tackling the main problem and it is making our lives hell.

“The heating still doesn’t work either. We have to warm our kids’ clothes up with a hair dryer in the morning because they’re all so damp.”

He added: “Every time we tackle a problem, the same one comes back or another emerges. The water damage is getting progressively worse.

“The council doesn’t care about us. We’ve tried to get solicitors and MP’s involved but I don’t know where to turn anymore.

“It’s not livable here because every flat is leaking. They need to rehome us and pull the block down.

“We have over 100 signatures on the petition but yet it still falls on deaf ears and we are still being ignored.”

A Birmingham City Council spokesperson said: “We are aware of resident’s petition regarding Jordan House and apologize for any inconvenience our refurbishment works have caused.

“However, these are essential to ensure the property is maintained to a good standard.

“Regarding the roof leak, a new temporary roof covering is being installed on Friday of this week before a new roof is fitted as part of the wider major works. Our pest control officer will work with the residents to eradicate any rodents.

“Regarding the internal works to properties, 95 percent of the tenants’ flats have now been completed (this includes a new Kitchen/ Bathroom/Electrical re-wiring/New heating systems/sprinklers and smoke alarms and a new fire-rated door entrance).

“There was a delay in completing the works due to a change in contractor, but they are now in place and they will be fitting a new roof and completing any outstanding structural works, both internally and externally, within the next few weeks.

“To bring the block up to the current regulations regarding fire safety standards, a new thermally-efficient external wall insulation will need to be fitted.

“In order for this to take place and to minimize the disruption to tenants, Birmingham City Council will look at decanting the affected customer to another floor of the block if space is available or moving them into nearby temporary accommodation whilst these works are undertaken.”