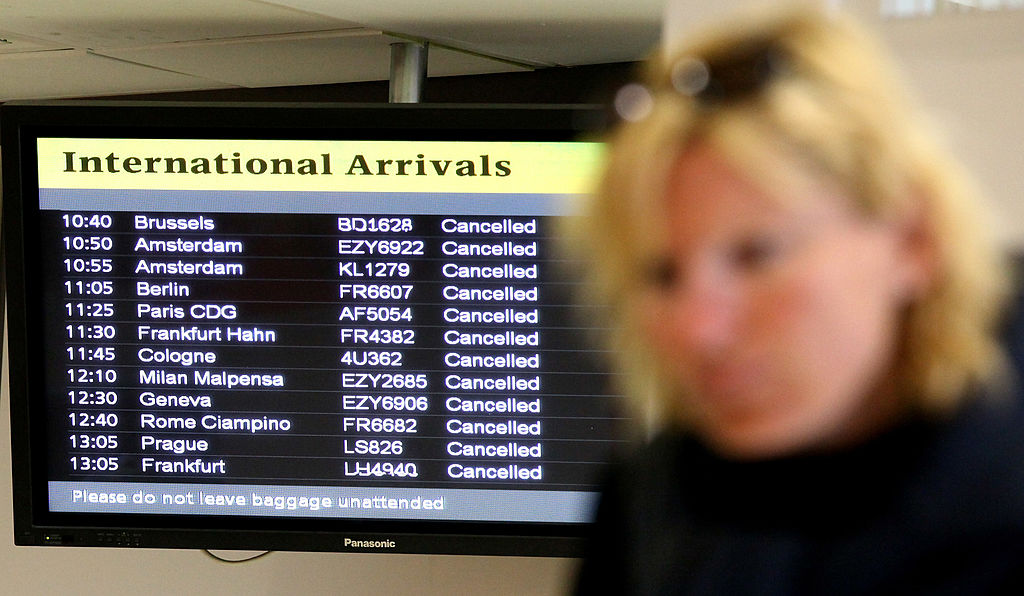 A passenger at Edinburgh airport looks on as flights canceled are displayed on a screen for a fifth day on April 19, 2010 in Edinburgh, Scotland. (Photo by Jeff J Mitchell/Getty Images)

The data revealed passengers flying from Edinburgh, Scotland suffered the third-worst UK airport delays in June, which averaged 26 minutes and were more than twice as long as pre-pandemic at 116 percent, compared to a national average of 71 percent.

The report from aviation analytics firm Cirium showed cancellations are having a greater impact on travel because airlines are operating around one-quarter fewer flights than in 2019.

It said the proportion of flights canceled at short notice (fewer than three days) had increased to three percent at Glasgow Airport in June compared to one percent in June 2019.

At Edinburgh, the figure increased from 0.8 percent to 2.3 percent.

Aberdeen’s figure went up from 1.7 percent to 2.4 percent.

However, Scotland fared better than some English airports.

Gatwick had the highest number of such cancellations, such as some of Easyjet’s, which accounted for 3.9 percent of the airport’s flights.

Heathrow – the UK’s busiest airport – had the second-highest number and was 2.2 percent of the airport’s total flights.

Average departure delays at Edinburgh Airport in June increased to 26 minutes compared to 12 minutes in June 2019.

The 116 percent increase compares to a UK average rise of 71 percent.

Aberdeen’s increased from eight to 14 minutes, while Inverness’s was up from nine to 12 minutes.

Only Gatwick and Bristol had longer average delays than Edinburgh, of 34 and 30 minutes respectively.

Heathrow’s was 25 minutes, while Southampton’s was one minute.

Cirium’s figures were for the UK’s 28 busiest airports, with the data based on flights departing the UK only.

A spokesman for Edinburgh Airport said: “The whole aviation industry continues to be impacted by the tumultuous shock caused by covid.

“The data does not provide context.

“Aviation was one of the first industries to feel the impact of the pandemic and will be one of the last to recover.

“It was subject to some of the tightest restrictions imposed by governments, resulting in thousands of jobs being lost.

“Considering restrictions were only lifted at the end of March, it is unrealistic to think any industry could recover to pre-pandemic levels in a matter of months.”

A spokesperson for AGS Airports, which owns Aberdeen, Glasgow and Southampton, said: “What these figures clearly show is our airports aren’t experiencing the same level of disruption as elsewhere.

“The industry as a whole has been facing a number of challenges which has resulted in airlines having to regrettably cancel a number of flights.”

«Previous Post
Hugs Bunny: Airline Goes Out Of Its Way To Reunite Baby With A Toy»Next Post
Around The World In 80 Days: Passenger’s Journal Documents A World Trip Inspired By The Famous Novel