The child, who is believed to be Scotland’s youngest wheelchair user, is completely paralyzed from the waist down. 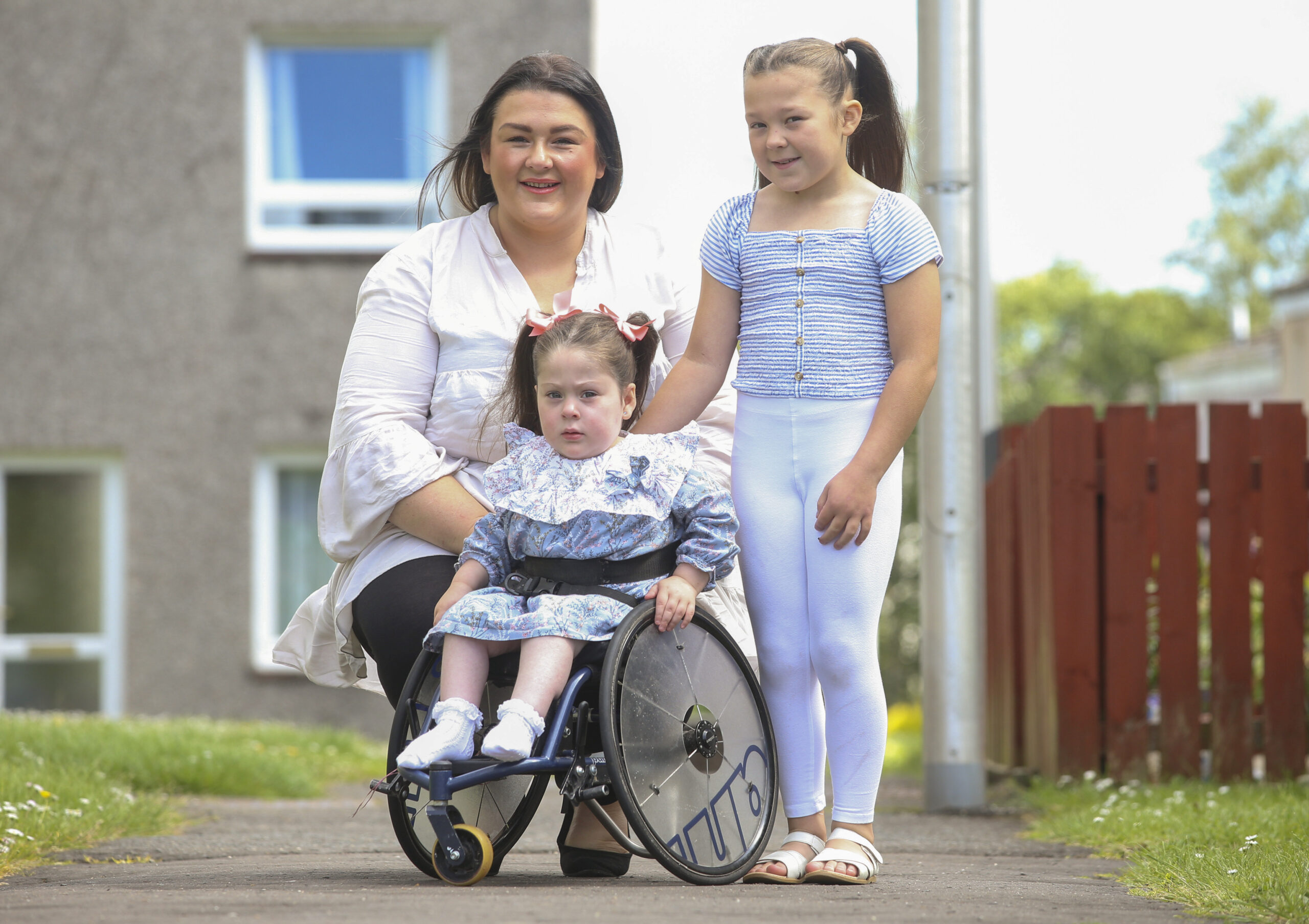 A toddler who is paralysed from the waist down after being born with her spinal cord outside her body is chasing after her siblings in the smallest wheelchair in Scotland. (Glasgow Herald, SWNS/Zenger)

A toddler who is paralyzed from the waist down after being born with her spinal cord outside her body is chasing after her siblings in the smallest wheelchair in Scotland.

Amber McRae, three, was born with her spinal cord outside her body and has endured 12 complex surgeries after she was born with a serious form of spina bifida and fluid on her brain.

The child, who is believed to be Scotland’s youngest wheelchair user, is completely paralyzed from the waist down.

Amber, from East Kilbride, South Lanarkshire, has now enrolled in nursery and loves chasing her siblings in her custom-made wheelchair.

Just a day after recently celebrating her third birthday, Amber underwent neurosurgery to fit a shunt in her head to drain excess fluid at the Royal Hospital for Children in Glasgow.

Mum-of-three Leanne Belch, 37, said: “She’s the bravest little girl and always smiling despite everything she has to cope with.

“She spent her third birthday in hospital and the staff went out of their way to make it as special as possible.

“She had presents and balloons surrounding her and everyone made such a fuss of her.

“Medics at the children’s hospital are just astounded at how well she’s doing.

“She has been through so much for her age, but she just takes it all in her stride.

“Nothing gets her down, she really is our own little miracle.”

Leanne found out at her 22-week scan that Amber has myelomeningocele spina bifida and hydrocephalus, which have caused her brain to be positioned further down into the upper spinal column than normal.

It also means that there is extra fluid in and around the brain which can cause ventricles in the brain to become too large and the head can also swell.

Doctors warned Amber would be born with her spinal cord and nerves from it exposed and visible on the outside of her body, and would need emergency surgery on her spine as soon as she was delivered.

Leanne said: “We were worried sick because she was so tiny and doctors had delivered her four weeks early to give her the best chance of success.

“She had to have her back physically closed and her first shunt operation to help drain fluid from her brain when she was less than a week old.

“Her shunts have been blocked several times, needing revisions, and her most recent surgery a few weeks ago was due to the pressure being too high in her head.

“Thankfully, she has the best surgeons looking after her and nothing is too much trouble for them.

“Amber has spent so much of her childhood in that hospital that she knows most of the medical staff by their first name, and they are the same with her.

“I genuinely can’t speak highly enough of the team at the children’s hospital. Every one of them is fantastic.”

Amber was recently given a specially-adapted wheelchair, believed to be the smallest in Scotland, to help her get around.

Leanne said: “It’s given her a new lease of life and so much independence.

“She gets in her chair and chases after her siblings. It’s just brilliant to see how well she’s doing.

“The chair was made especially for Amber, and we were told it’s the smallest anywhere in Scotland.

“It has opened up a world of possibilities to her and she’s now in nursery full-time too.

“We are so pleased with the progress she’s making – she’s just incredible.”

The family says they are grateful for the support they receive from Glasgow Children’s Hospital Charity.

Leanne added: “I really don’t know how we would have coped during the last three years without them.

“Not only are they brilliant support to Amber, but our whole family too.

“Their play team helps take Amber’s mind off being in hospital and all the endless tests she has to go through.

“They make her laugh and really manage to brighten up her day.

“At times I’ve felt down about it all, but just seeing Amber progress and begin to thrive as a normal wee girl keeps me going.

“We are just so grateful for the help the charity has given us, it really is a lifeline to families like ours.”

«Previous Post
Tiny Homes Huge Savings: Man Who Was Tired Of Paying High Rent Built A Tiny House From Scratch»Next Post
A Wheel Of A Time: Couple Converting A $10,600 Bus Into A Home To Escape The High Monthly Rent