The new technology not only allows the team to pick up on whale vocalizations but also tracks the whales in space and time.
By Alice Amelia Thomas July 13, 2022
Facebook
Twitter
Linkedin
Email 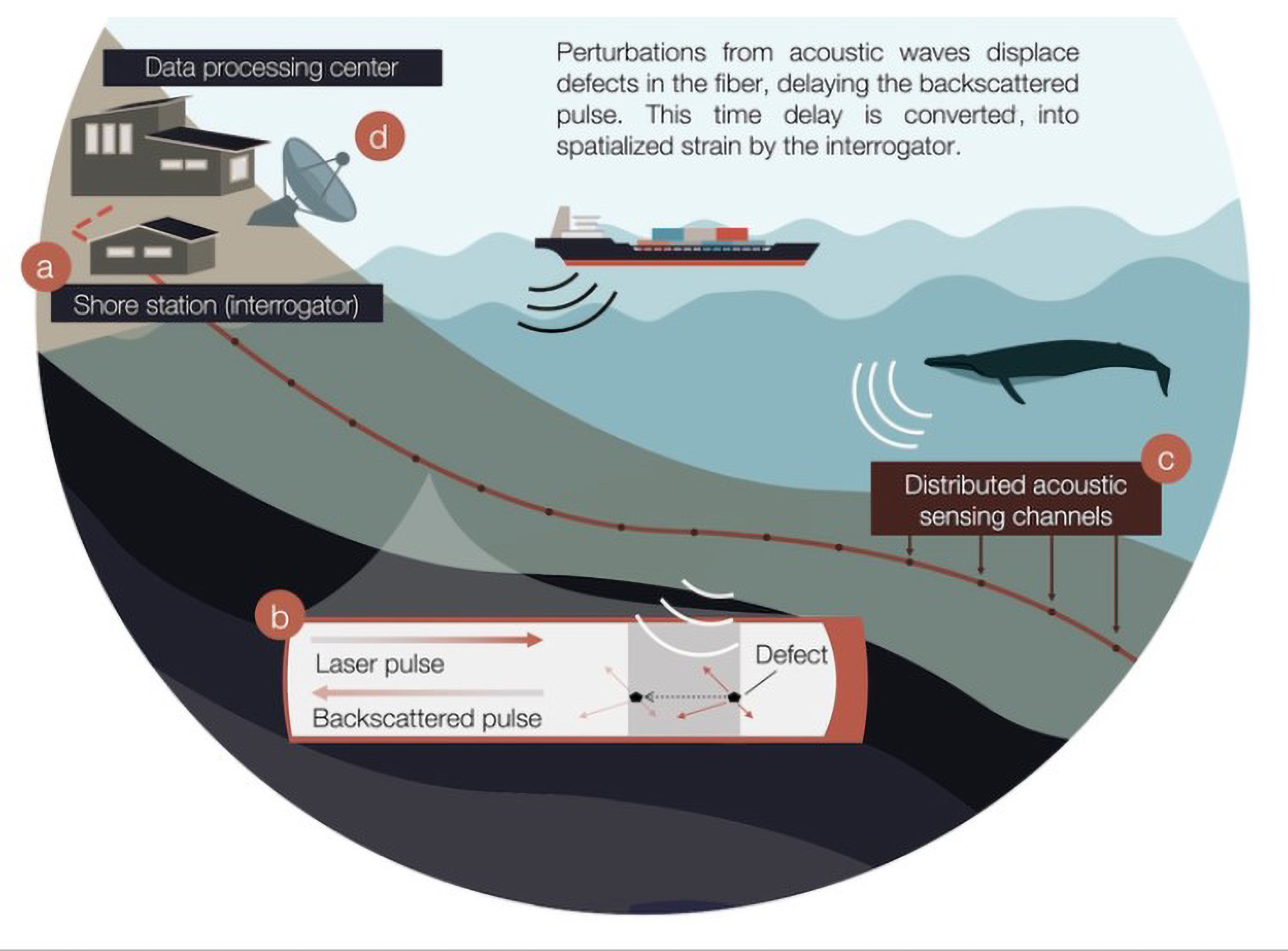 This schematic shows how the Distributed Acoustic Sensing, called DAS, works. Laser pulse is sent from the shore station through a fibre optic cable by an interrogator (a), which has evenly spaced nodes on it, called defects (b). Underwater sounds cause the defects in the fibre to be slightly displaced, which delays the backscatter a signal back to the interrogator, which then interprets the time delay as a strain on the fibre. (Graphic: Marte Finsmyr, Lea Bouffaut/Zenger).

Marine scientists have revealed how they can track whale movement through the oceans using spare fiber optic cables to eavesdrop on them.

Individual hydrophones, or underwater microphones, had previously been used to track the large mammals as they traveled across the world’s seas.

But the cost and their geographic limitations made them expensive and difficult to use.

The technique turns any unused fibers in the cable into a long arrangement of virtual hydrophones.

Project researcher Lea Bouffaut – co-author of the article ‘Eavesdropping at the Speed of Light,’ in Frontiers in Marine Science – explained: “Deploying hydrophones is extremely expensive.

“But fiber optic cables are all around the world, and are accessible.”

The study took place in Ifsjorden, an area where blue whales forage during the summer in the Svalbard archipelago between mainland Norway and the North Pole.

The new technology not only allows the team to pick up on whale vocalizations but also tracks the whales in space and time.

Bouffaut said: “I think this can change the field of marine bioacoustics.”

Meanwhile, in a similar study scientists have discovered that humpback whales participate in cultural exchanges by measuring the acoustic waves of their songs.

Led by Queensland University (UQ) in Brisbane, Australia, the study examined the songs of Australian humpback whales to see if these sound patterns changed in any way when learned and sung by whales in nearby New Caledonia.

The findings revealed that the humpback whales in New Caledonia are capable of memorizing songs from their Aussie relatives with astonishing accuracy.

Jenny Allen – whose work at the UQ’s School of Veterinary Science led to the study – said: “It’s rare for this degree of cultural exchange to be documented on such a large scale in a non-human species.

“We found they actually learned the exact sounds, without simplifying or leaving anything out.

“And each year we observed them, they sang a different song so it means humpback whales can learn an entire song pattern from another population very quickly, even if it’s complex or difficult.”

Humpback whales were almost hunted to extinction with as few as 1,500 remaining in Australian waters at the tipping point of the global whaling industry, a population that has grown to 40,000 whales over the last few decades.

Allen said: “An in-depth understanding of a species is known to greatly improve the efficacy of conservation and management methods.”