Hull Of A Rescue: Navy Plucks Heart Attack Trawlerman From Deck Of Ship 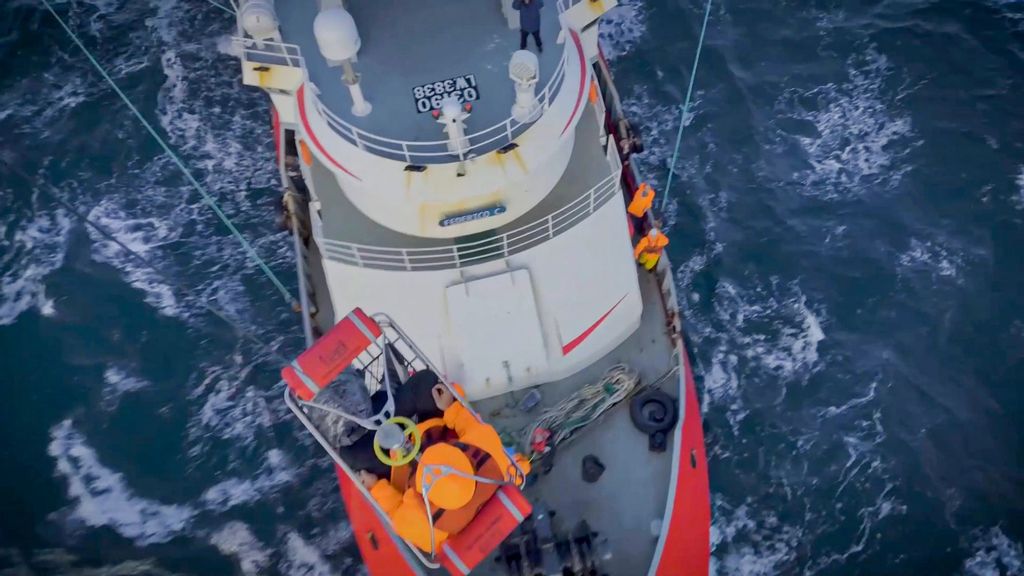 Moment of the rescue operation of the fisherman who suffered a heart attack on board of a boat near the city of Rawson, in Argentina, July 2022. (Prefectura Naval Argentina/Zenger)

The Argentine Navy has saved a fisherman who suffered a heart attack at sea and had to be flown over 150 miles to a hospital for urgent treatment.

The Argentine Naval Prefecture said the rescue operation took place about 240 kilometers (150 miles) from Rawson: a city in Chubut, a province in Argentina’s southern Patagonian region.

The 47-year-old man, who has not been named but who was suffering symptoms consistent with a heart attack, was airlifted to a hospital after receiving first aid onboard the helicopter that was sent to rescue him.

The Argentine Navy said in a statement on Saturday, July 9: “In a precise maneuver, specialized personnel from the Argentine Naval Prefecture air-evacuated a crew member from a fishing vessel who suffered symptoms consistent with an acute myocardial infarction while they were sailing approximately 240 kilometers from the city of Rawson.

“The emergency began when the captain of the Federico C. fishing vessel, flying the Argentine flag, sent a radio communication with the ‘L3A Prefectura Comodoro Rivadavia Radio’ Coastal Station reporting that one of the crew members suffered severe chest pains, which radiated to his left arm and made him numb.

“After a radio consultation with a Prefecture doctor, the immediate air evacuation of the 47-year-old man, who suffered a possible case of acute myocardial infarction, was carried out.

“Immediately, a Prefecture plane took off to the scene and the crew members were the first to arrive at the emergency zone and assess the situation before the arrival of the rescue helicopter.

“Once on top of the ship, specialized personnel from the Argentine Naval Prefecture lowered a stretcher from the helicopter and hoisted the crew member onboard so he could receive first aid.

“After arriving at Trelew airport, the man was transferred to a hospital for better care.”

In the footage, the rescue helicopter is seen approaching the fishing vessel before hovering above it so a medic can be lowered onto the deck to assist the 47-year-old fisherman.

In a scene filmed from the rescue plane, huge waves apparently batter the fishing vessel as the helicopter hovers overhead.

The victim is seen being winched onboard the rescue chopper before it flies back across the swirling waves to a nearby landing area.

The fisherman is met by paramedics on the tarmac and is seen being stretchered into a waiting ambulance after the rescue helicopter had safely made it to the landing strip.

«Previous Post
Cops Rescue Baby Deer Trapped In Chain-Link Fence»Next Post
On Your Bike: Road Closed For Over A Month To Build A Pointless Cycle Lane