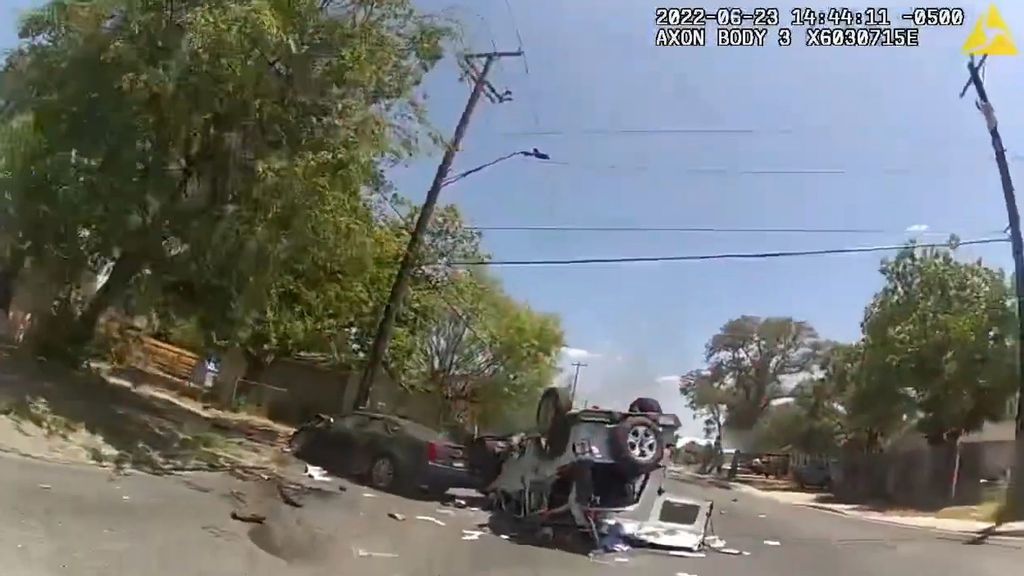 Footage of the feat shows flames pouring out of the flipped SUV as the two officers struggle to open the driver’s door.

But the buckled door frame refuses to budge, so the pair bend the entire door in half to they can reach the victim and pull her to safety.

“With the help of citizens, officers helped save a woman from a burning vehicle.

“Together, they helped save a woman from a burning vehicle. Way to go Officers Mireles & Botello.”

In the footage, a caption reads: “On Thursday, June 23, 2022, West Patrol Officers Roberto Mireles and Samuel Botello responded to a major crash at St. Cloud and Donaldson.

“Officer Botello was the first to arrive on the scene after hearing the crash.”

The footage shows the cop arriving at the overturned car and telling colleagues: “I can’t get the driver out, the vehicle is on fire.”

He tackles the flames with a fire extinguisher before instructing a colleague: “Try to keep that fire down.”

The officer then wrenches on the driver’s door in an attempt to rescue the trapped woman.

Officer Botello explains: “My worst fear was that the vehicle was going to blow up and we wouldn’t be able to get the people inside the vehicle out.”

Officer Mireles says he arrived on the scene and helped his colleague to “push on the door”.

Officer Botello states: “We grabbed onto her and pulled her out, got her a safe distance away and we got the other occupants of the other vehicle out.”

Officer Mireles says: “There were also several neighbors who came out and they were extinguishing the fire at the same time.

“I really appreciate how the community came in and helped every which way they could to extinguish and basically get everybody out of danger and to safety.”

“At the end of the day it all comes down to, we’re just mere humans, right?

“We’re just wearing the uniform. Yes, it’s a duty we take, but we’re here because we love our community and want to take care of everybody else.”

The video ends with the caption: “Firefighters arrived and were able to extinguish the fire. Everyone involved in the crash survived.”