Other lots include a unicorn skull, a centaur skeleton, an artwork of a floating stuffed giraffe, and a motorbike-riding zebra. 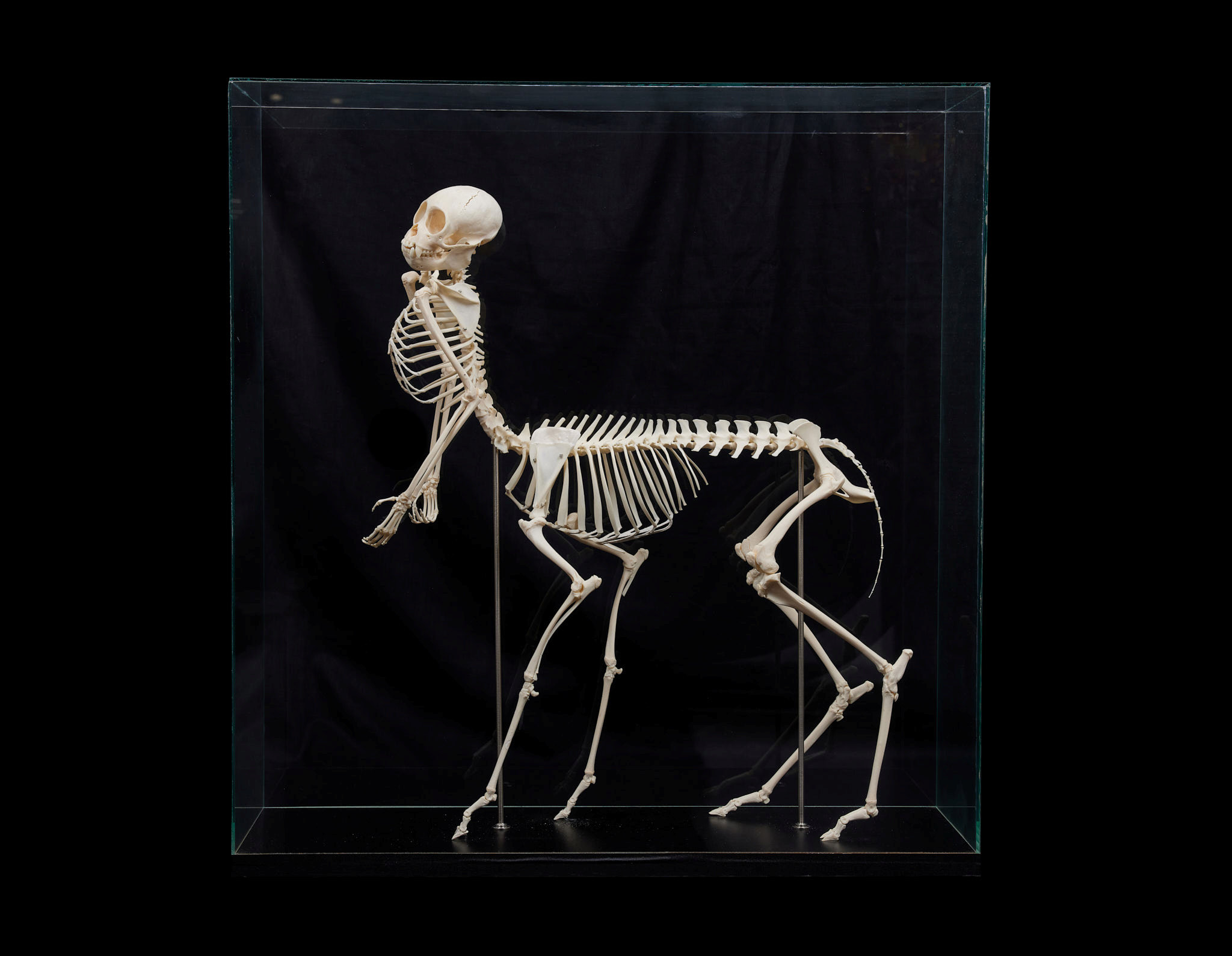 A crazy collection of curios from Dodo bones to mammoth hair and even the tooth from a Megalodon shark are all up for auction next week.(Simon Galloway, SWNS/Zenger)

A crazy collection of curios from bones of extinct Dodo birds, hair from a wooly mammoth, even the tooth from a massive Megalodon shark are all up for auction this week.

Other lots include a unicorn skull, a centaur skeleton, an artwork of a floating stuffed giraffe attached to balloons, and even a motorbike-riding zebra which could fetch up more than $35,000.

Dubbed Objects of Wonder, the wacky auction has been put together by Curated Auctions in London.

Buyers will also be able to snap up a stuffed bull shark and even a mounted set of human glass eyes.

Some of the unusual products aren’t even all that expensive: a tiny jar of mammoth hair starts at just $23.

Altogether, there are 334 weird and wondrous items which will go under the hammer in London on Wednesday, July 13.

The 5 and one-half inch serrated fossilized Megalodon tooth is at least 2.5 million years old and could fetch up to $2,100.

Three times the size of a modern great white shark, it was the largest shark ever to exist and was immortalized in the hit film The Meg.

A set of “exceptionally rare” dodo bones, found on the African island of Mauritius before the flightless creatures became extinct in 1681, could fetch up to $3,300 between them.

A rib bone, toe bone and vertebra of Raphus cucullatus will all go on sale.

Both of the smaller bones are expected to fetch at least $955 each while the vertebra could fetch up to $1,433.

They will be displayed alongside a certificate of authenticity.

Dodo bones do not come onto the open market often and the privileged private collectors who own them are very few in number.

He said at the time: “My life as a collector has taken me to strange and faraway places and I have sometimes been blessed with luck, the sort of luck that perseverance sometimes brings.

“In the 2000’s, I visited a grand house in Suffolk to view a spectacular collection, and in a nineteenth-century collector’s cabinet I came across a small group of dodo bones – to my knowledge none had come on the open market since 1934 and as far as I have been able to establish only a tiny handful of private collectors – perhaps less than ten worldwide, own one.

“I bought all five and they are truly one of the greatest treasures I have ever or will ever own.

“One I sold to a client, one I swapped for something spectacular, one I sold with Christies and it is a great personal wrench to sell this one – but needs must, the last will remain in the museum’s collection forever.”

Also up for grabs are a feather and bone from another legendary extinct bird, the Great Auk, which could fetch up to $3,582 between them – the slightly more than one-inch long tail feather selling for at least $2,380 and the rib bone for at least $1,194.

The Great Auk, known to scientists as Pinguinus impennis, used to live off the North Atlantic Ocean but have been extinct since 1852.

The feather is one of just 14 known to be in private hands across the world.

The creatures sadly became extinct at the hands of rapacious hunters for food and bait.

The birds were often driven up a plank and killed on their way into the hold of a vessel.

The last known specimens were killed in Eldey Island in Iceland, but around 80 of them and their eggs are preserved in museums.

This feather comes from the Clungunford Auk and was bought by John Rocke of Clungunford House in the west of England in 1860.

It was acquired by the current owner from the collection of celebrated taxidermist Barry Williams.

A stuffed taxidermy replica dodo, which was made using specially bred geese to get the feather color exactly like that of the extinct bird, is expected to fetch up to $3,500.

Meanwhile an “extremely lifelike” fake dodo skeleton could fetch up to $2,388.

Only two taxidermy dodo skeletons have been sold in the past hundred years- the Summers Place Dodo in 2016, and another which was sold in 2019.

The unicorn skull, with a huge painted horn, could fetch up to $955.

The complete skull, which is about 10 inches wide and 22 inches long, has all its teeth and is said to have been discovered in the vaults of a castle in Scotland.

The centaur skeleton is a replica of the bones of the centaur.

In Greek mythology the centaur has the head, arms, and torso of a man and the body and legs of a horse.

The replica is made from the skeleton of a crab-eating macaque monkey which will need an export permit to leave the United Kingdom.

The stuffed juvenile bull shark, was bought back from Madagascar by a tourist in the 1950s.

A display of 39 human glass eyes, mounted in a rectangular glazed case, is expected to fetch up to $1,433.

In terms of the more artistic creations, the floating baby giraffe, which hangs from the ceiling, was produced by taxidermist Simon Wilson.

A similar one from Aynhoe Park in England’s south Midlands region has previously sold for a whopping $119,00 at auction, while Wilson’s taxidermy and works of art have been featured in films and television productions.

It is expected to fetch at least $5,971, but this could be a huge underestimate.

The stuffed zebra, which is riding a Suzuki motorcycle, could fetch up to $35,000.

He studied the technique of taxidermy under the guidance of Simon ‘the stuffa’ Wilson, who produced the now-famous taxidermy ‘Floating Giraffe’ at Aynhoe Park, a country estate and wedding venue.

Both Robolobavich and Wilson source animals that have died from natural causes from zoos and farms for their creations.

Auction house owner Rachael Osborn-Howard said: “When I began working on this auction some six months ago, the scarce pieces I really wanted to source and include were a genuine dodo bone, a replica taxidermy dodo, a replica dodo skeleton, and a taxidermy unicorn.

“Fortunately, luck was on my side and all four are featured in this incredible auction.

“From floating giraffes to dodo bones, extinct bird feathers to flying beasts, as well as over three hundred other lots of taxidermy, curiosities and natural history, this sale is sure not to disappoint.”