The animal rescue was filmed by the officers’ body cameras in the town of West Seneca, a suburb of Buffalo, New York. 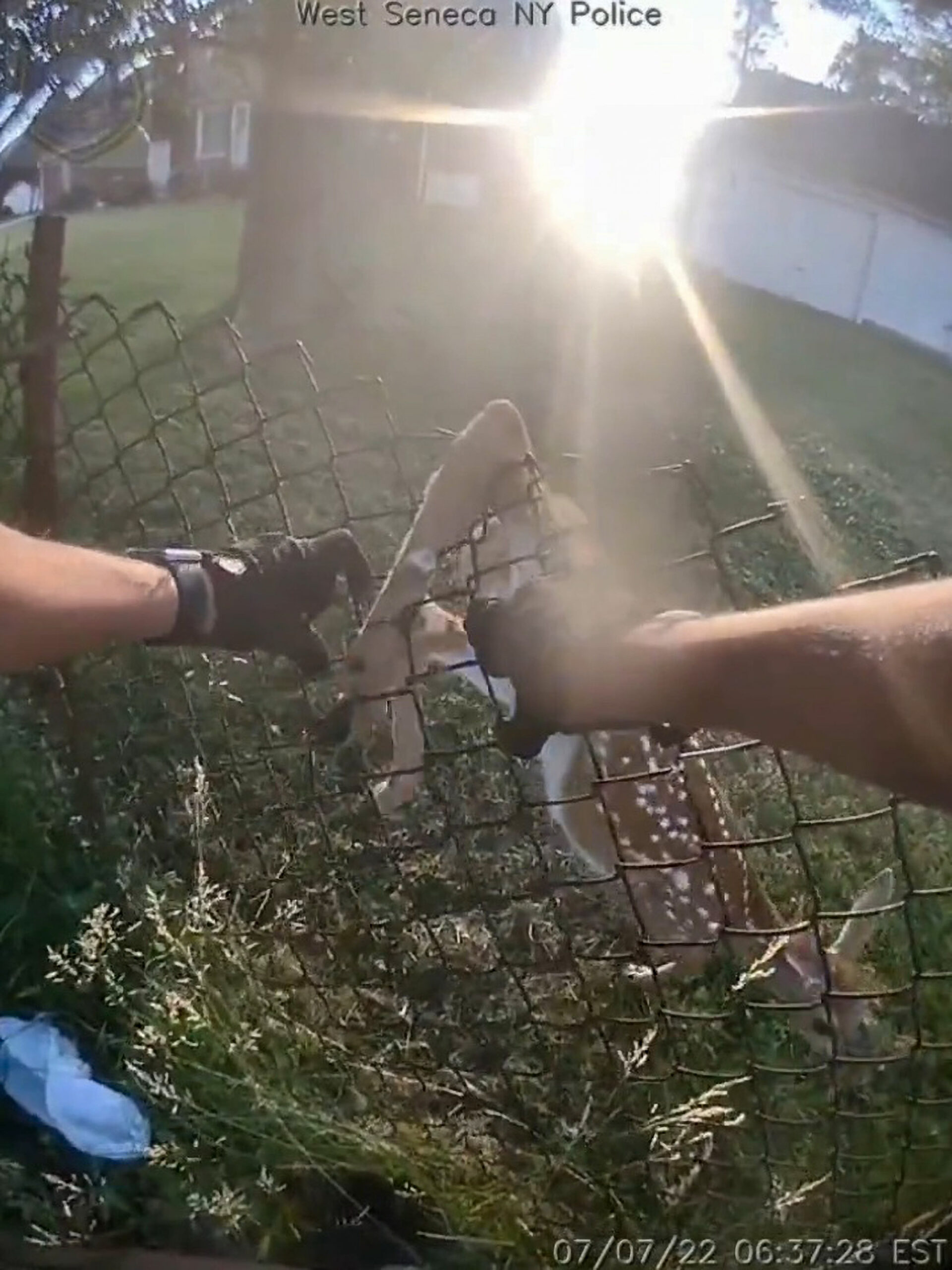 These heartwarming images show police officers rescuing a young deer with its hind leg trapped in a chain-link fence.

The animal rescue was filmed by the officers’ body cameras in the town of West Seneca, a suburb of Buffalo, New York.

In the footage, three cops are seen arriving on the scene before struggling to free the deer’s leg from a garden fence.

As the deer struggles to get free, the officers try to manipulate its trapped leg out of the wire. The deer can be heard crying out in fear as the police officer continues to reassure it. He can be heard telling the fawn: “Almost there, buddy! I know!”

An officer can be heard telling the deer “relax” before another tells his colleagues that they will probably have to cut the fence. The deer can be seen struggling wildly to get free, while one of the officers holds it up as his colleague tries to free its trapped leg.

Finally, they use their police batons to open up the links so the deer’s leg can slip free.

The grateful deer stops for a second and then bounds out of the garden.

As it disappears, one of the officers says: “There we go! Leg out!”

The local police explained that they sometimes get called out to free animals from railings and fences when Animal Control officers are unavailable, calling it the “lighter side of police work.”

The police joked that the officers’ overnight shift was “brought to you by Bang energy drinks and Sunoco breakfast sandwiches”.

The footage was obtained from the West Seneca Police Department (WSPD), who said: “During times when Animal Control isn’t available, we often get called upon to free deer from nets, railings, fences, etc.

“Sometimes it’s nice to share a lighter side of police work, so here is a video from this morning courtesy of the overnight shift, brought to you by Bang energy drinks and Sunoco breakfast sandwiches.”

The WSPD added: “The principal mission of the West Seneca Police Department is to preserve the rights of citizens and reduce fear in the community through the prevention of crime, protection of persons, property, and the maintenance of order in public places, anticipate and respond to events that threaten public order and the protection of life and property.”