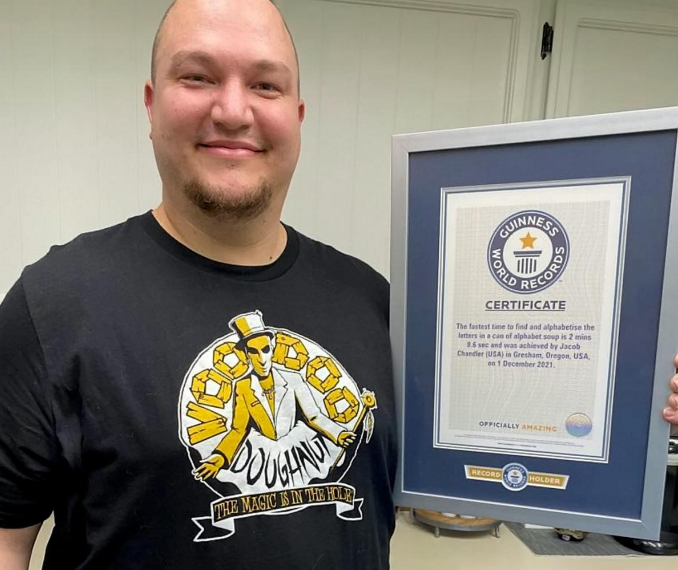 A man has set the world record – for putting alphabet soup letters in the correct order in the fastest time.

He had to scoop out each individual letter and place it in a certain section on a piece of card.

He set the record from his home in Gresham, Oregon, in January 2021, but it has only just officially announced by Guinness World Records due to a lockdown backlog.

Jacob said: “I decided to pick this challenge because it was such an obscure record, I felt it would be feasible to accomplish but also be a conversation starter.”

The equipment maintenance technician gave the challenge a go-to show his son, 11, that anything is possible if you try hard enough.

He said: “Children are all ears and big eyes, and they consume everything around them.

“I figured I could show my son anything is possible if you put your mind to it and work hard.

“My son really is a blessing, and I’m thankful for him every day.”
To complete the challenge, he said he did not have any particular techniques apart from watching the bowl for the next letters.

He said: “As I went for one letter, I would be looking out for the next, and so on.”

Jacob’s wife, Lindsay, 38, and his son were responsible for timekeeping, with his son using his laptop as a stopwatch for backup.

The record took a lot of preparation for Jacob, such as looking through dozens of alphabet soup brands – eventually settling on Chef Boyardee.

He said: “I took a couple of things into consideration when choosing the final soup.

“Like, what was the thickness of the sauce? Does it contain too many vegetables? What are the letter sizes?

“All of this I had to consider because any of these factors could affect my time.”

On the day, Jacob felt quite anxious, and this feeling wasn’t over once he completed the challenge.
Jacob said: “From submitting my application to receiving the record at my front doorstep took eight months.

“There were lots of stress-induced weekends there waiting for evidence replies from GWR.

“But I was so excited after I beat the record I called my parents at their vacation home in Arizona to tell them the good news.”

Jacob said his biggest motivation was his family.

He said: “My mother, Vickie, and father, Tim, have always stood by my side.

“No matter what the crazy idea or fantasy that I have had they have always been there to support me.

“If it was not for the love and support my mother and father have given me, I would not be as successful in life as I am today.

“My wife is another person who has been by my side. She has cared for me in times of need and always stood by me.”

Jacob doesn’t intend on stopping at just one record, he is aiming for a further three titles.

«Previous Post
Sunbathe At Your Own Risk: Doctors Warn Of Potential Vitamin D Overdosing»Next Post
Working Out The Weekend: Being A ‘Weekend Warrior’ Boosts Health The Same As Everyday Exercising